Illinois State Museum – On the south side of the State Capitol complex, you can visit the Illinois State Museum, which displays permanent and changing exhibits of Illinois’ people, life, land, and art. Spring & Edwards Streets, Springfield, Illinois 62706-5000. 217-782-7386

National Museum of Transportation – Displays one of the world’s largest collections of transportation vehicles, including cars, fire trucks, trolleys, locomotives, and even an airplane or two. The museum also displays a historic Coral Court Motel unit once located along Route 66. 3015 Barrett Station Road, St. Louis, Missouri, 314-965-6885.

St. Louis Car Museum – The only museum where you can leave with the exhibits! It’s the largest car museum in the Midwest, with over 150 cars displayed in a showroom that covers 55,000 square feet. The collection is constantly changing, with additions from private collections and others offered for sale by their owners. We don’t just show our cars; we sell them, too. Fans of Route 66 will love our huge gift shop, exclusively devoted to car memorabilia. Stop by and take home a piece of the history of American highways. 1575 Woodson Road, St. Louis, Missouri 63114, 314-993-1330 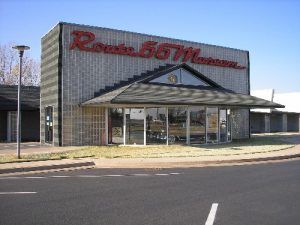 Canadian County Museum – The Canadian County Museum is rated as one of the outstanding museums in Oklahoma. Located in El Reno’s Heritage Park, the grounds sit on the 98th meridian, which divided the unassigned lands in central Oklahoma from the Cheyenne and Arapaho lands in western Oklahoma. The main museum is housed in the fully restored old Rock Island Depot. The museum grounds house several historic buildings, from the first Red Cross Canteen in the nation to General Sheridan’s cabin, the oldest standing structure in Canadian County. Free Admission, donations accepted. 300 So. Grand, El Reno, Oklahoma, 73036

National Route 66 Museum – The National Route 66 Museum uses a road motif to allow visitors to travel through all eight states along Route 66 “The Mother Road.” The trip begins in Chicago and ends in California. Murals and different vignettes depict the eras of the road and the interesting places that made Route 66 so famous. As you travel along, you can listen to recorded histories and personal accounts of the road from overhead audio kiosks. P. O. Box 5, Elk City, Oklahoma 73648 (580) 225-6266.

Devil’s Rope Museum/Texas Route 66 Exhibit – Devil’s rope means barbed wire. The Devil’s Rope Museum features the history of barbed wire, its artifacts, the significance of the invention, and its impact on the development of the Old West. The museum also features information about Texas Route 66, the City of McLean, and other nearby areas. The museum is also the headquarters of the Texas Historic Route 66 Association and the first Mother Road museum on the route. 806-779-2225, 100 S. Kingsley Street at the east end of downtown McLean, Texas. 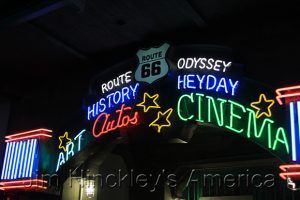 Neon inside the Powerhouse Museum in Kingman Arizona. Photo by Jim Hinckley.

Powerhouse Route 66 Museum & Visitor Center – The Route 66 Museum depicts the historical evolution of travel along the 35th parallel that became Route 66. Our brilliant murals, photos, and life-size dioramas capture each of the groups that have traveled the route that has come to be known as the Mother Road. Open daily, admission charged. 120 West Andy Devine Ave., Kingman, Arizona 86401, 928-753-9889

California Route 66 Museum – The California Route 66 Museum maintains and displays a collection of historic photographs and artifacts related to the history of Route 66 and its communities. The displays include automotive history, cultural and economic impact, as well as the development of the highway itself. Exhibitions incorporate corresponding topics such as early pioneer trails and the railroad. Our exhibitions constantly change and rotate throughout the year, so come back often to see what’s new. 6825 D Street. Between 5th and 6th Streets (Old Route 66). P.O. Box 2151, Victorville, California 92393, (760) 951-0436.