Mural at the Kingman, Arizona Museum.

The Route 66 city of Kingman, Arizona, the county seat of Mohave County, got its start when the Atlantic and Pacific Railroad came through in 1882. 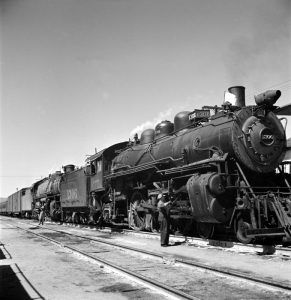 In October 1857, Lieutenant Edward Fitzgerald Beale first explored the present site of Kingman when he and his team surveyed the 35th parallel in anticipation of building a wagon road. In the heat of the desert, they used camels for transportation, an idea they were sure would catch on. Alas, it never did. When the wagon road, stretching from Fort Defiance to the Colorado River, was completed, it was named for the Lieutenant. Soon the Beale Road saw all manner of travelers trekking through the desert. In the beginning, these were primarily miners and prospectors seeking their fortunes.

When the railroad began to reach this part of the west, Lewis Kingman surveyed the route between Albuquerque, New Mexico, and Needles, California, in 1880.  The new railroad, when it arrived, would closely parallel Beale’s old wagon road. Later, when Route 66 came barreling through, it too would closely follow this historic path.

In 1882, a settlement cropped up along the railroad tracks that soon had a rooming house and a couple of stores. The fledgling town was named after Lewis Kingman, the railroad surveyor. A year later, the railroad tracks were complete. More new businesses began to pop up, including a hotel and several tent buildings housing a restaurant, a saloon, and a mining operations office.  Soon a post office was also established. 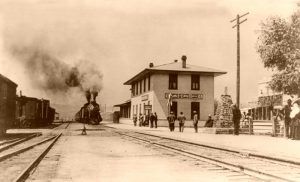 Kingman built its first school. The following year would see the organization of the town’s first church and the opening of the Kingman Hotel. But the most significant event of 1887 was when Kingman won the election of the county seat for Mohave County from nearby Mineral Park. Despite the conclusiveness of the polls, officials refused to give up the county records. Outraged, Kingman citizens subsequently raided the Mineral Park town hall and made off with the county documents, literally “taking” the county seat. 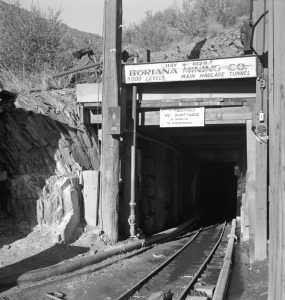 A tungsten mine near Kingman, Arizona by Fritz Henle, 1942.

By 1888 most of the original townsite lots had been sold, and the business district grew on the north side of the railroad line, now called Andy Devine Avenue. On the south side, numerous homes were soon built.

Despite a significant economic depression in 1893 when the price of silver fell from $1.29 to $.78 oz., the comparative increase in the value of gold, plus the cyanidation separations process introduced into Arizona in 1895, resulted in an influx of miners and promoters. The discovery, in May 1900 of Gold Road, a rich gold strike in the Black Mountains, helped to make Kingman a center for the mining activities of the county. 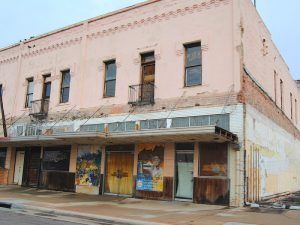 The old Hotel Beale in Kingman, Arizona, is abandoned and deteriorating today. By Kathy Weiser-Alexander.

By the turn of the century, Kingman had grown to some 500 people and continued to develop as gold was discovered in the hills surrounding area. The Hotel Beale, located at 325 E. Andy Devine Avenue was built in 1900 and first catered to the many passengers of the Santa Fe Railroad. In 1906, the Devine family from Flagstaff moved to the area and purchased the hotel. It was here that Andy Devine, a famous character actor in films from the 1920s to the 1950s, grew up. During these years, the hotel began to serve guests traveling on the Old Trails Highway and later to travelers of Route 66 when it came through. Successful for decades, the historic Hotel Beale closed in 2012 and now sits abandoned and in disrepair. 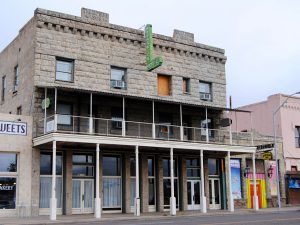 In 1909, the Hotel Brunswick was established by John Mulligan and John W. Thompson, which competed with the Hotel Beale. It was the first three-story building in the county and surrounding area. This hotel quickly earned a reputation for providing upscale services with Waterford crystal stemware, solid brass beds, and telephones in every room. In 1912, the partners got into a disagreement, and a wall was built to create two different hotels, with one having 25 rooms and a bar, while the other also had 25 rooms and a restaurant. In the 1960s, the dividing walls were brought down. In 1997, new owners renovated the building and operated it as a bed & breakfast hotel. In 2012, the building was sold to Swiss real-estate investor Werner Fleischmann, renovating the building in phases. 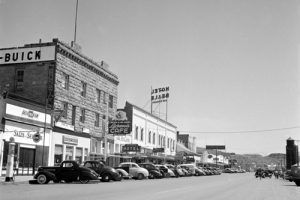 During the early 1920s, local miners, cowboys, and businessmen mingled with railroad passengers and motorists traveling the National Old Trails Highway at the Hotel Beale. One of the miners employed at the Katherine Mines that frequented the Beale on his visits to Kingman was an adventuresome young man named Louis L’Amour. The landscapes and people he encountered in Kingman would season his epic stories of life on the western frontier.

By the end of World War I, mining had dropped off, and Kingman began to suffer. However, the next few years saw a revival of the mines, and traffic increased through the city on Route 66. Soon, cafes, motels, and service stations began to crop up along the Mother Road. Today, several of these early icons can still be seen in Kingman. A visit to the old powerhouse, converted to a Route 66 Museum and visitor’s center, is a must. The Powerhouse building is also home to Arizona’s Route 66 Association. 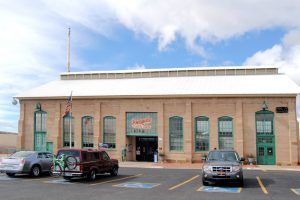 During World War II, Kingman was the site of a U.S. Army Air Force airfield. The Kingman Army Airfield was founded at the beginning of the war as an aerial gunnery training base and became one of the largest in the country, training some 35,000 soldiers and airmen. Following the war, the Kingman Airfield served as one of the largest and best-known reclamation sites for obsolete military aircraft.

The 1950s and 1960s were the heydays of Route 66, which fueled the Kingman economy with a continuous flow of vacationers, business travelers, and transportation. In August 1980, Interstate 40 opened in Kingman, bypassing Route 66. 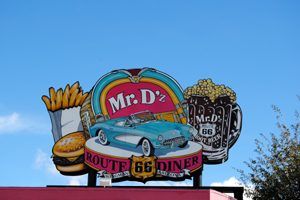 The historic Hotel Brunswick has served customers for almost a century and is closed but currently under renovation. Also, check out the White Rock Auto Court, one of the last auto court motels on Route 66. If you’ve got an appetite, have a go at Mr. D’s Route 66 Diner, with their great sign and even better burger. Throughout the city are over 60 buildings that are listed on the National Historic Register.

Today, the Kingman area is home to some 45,000 people with numerous recreational opportunities nearby, including the Colorado River, Lake Mead, Lake Havasu, and Lake Mohave. It is also the closest city to the Grand Canyon Skywalk, the transparent horseshoe-shaped cantilever bridge on the edge of the Canyon is a popular tourist stop. 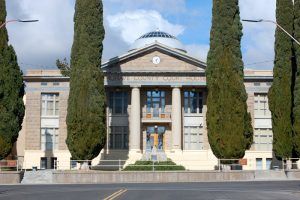 Kingman is located in northwestern Arizona at the intersection of Interstate 40 and U.S. 93.

If you are a ghost town enthusiast, a side trip, some 20 miles northwest, will take you to Chloride, a well-preserved ghost town.

And, ghost town buff or not, Route 66 will soon lead you down the road to two historic mining camps – Goldroad and Oatman, Arizona. 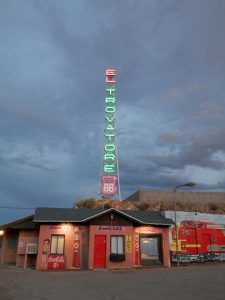