McLean, Texas, located on Route 66 in southeastern Gray County, is a time capsule into simpler times. 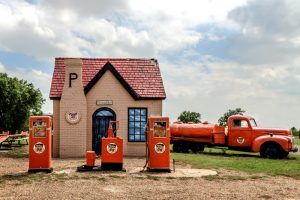 McLean started as nothing more than a cattle loading site along the Chicago, Rock Island and Gulf Railway when, in 1901, a water well was dug and a switch and section house were built. But, among the railroaders, a large rancher had a vision. Alfred Row, an Englishman, saw a greater opportunity for the area and donated land near the switching station to lay out a townsite.

Naming the town for W.P. McLean of the Texas Legislature and Railroad Commission, the town quickly grew, gaining a post office by 1902. Just one year later the town was incorporated and boasted two banks, two livery stables, two wagon yards, two cafes, a post office, a lumber yard, newspaper called the McLean News, and a furniture store. A windmill pumped water from a well drilled in the middle of Main Street, and residents hauled their water from the mill home in barrels and buckets.

By 1909 McLean had become a center for area agriculture, as several hundred carloads of hogs and watermelons were shipped from the rail station annually. In fact, it became so busy that four telegraph operators were required to handle the messages of the railroad business. 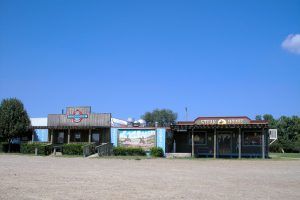 In 1912, Alfred Rowe, the town’s founder, left McLean to visit his native England. Tragically, he would never see McLean again as, upon his return to the United States, he met his death on the Titanic when the grand ship sank in the Atlantic in the early morning hours of April 15, 1912. Legend has it that rescuers found him hugging his briefcase, frozen to death atop an ice floe, with his gold watch still ticking.

In 1927 the town profited from the oil boom, becoming a major shipping point for area livestock, gas, and oil. And, in the very same year, the Mother Road arrived in McLean, further ensuring the town’s growth for the next several decades. During the Golden Age of  Route 66, McLean boasted 16 service stations, six motels, and numerous cafes. Oklahoma based Phillips Petroleum Company built one of their first Texas service stations in McLean in 1929, the first being in Turkey, Texas in 1928. By 1940 McLean had six churches, a newspaper, 59 businesses, and a population of more than 1,500. 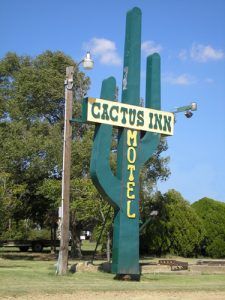 In September of 1942, an area northeast of McLean was chosen to serve as the McLean Permanent Alien Internment Camp during WWII. During its operation, the camp boasted twenty to thirty buildings and housed 3,000 prisoners-of-war. The first prisoners were German troops captured in North Africa, who arrived in early 1943. A second group of Germans captured in their Homeland were also retained at the camp. During its time, there were several escape attempts from the camp, but on the bare plains of the Texas panhandle, there was nowhere to go. All were recaptured and seemed glad to return to prison. The camp continued to operate until July 1, 1945.

With the growth of nearby Amarillo and the emergence of Pampa as the county’s industrial center, McLean’s population began to fall. In the late 1970’s Interstate 40 began to bypass many of the small towns of the Texas Panhandle. McLean business owners fought hard to keep McLean alive, knowing that a bypass would draw away the tourist trade for which the many service stations, motels, and cafes thrived. Doing their best, the town fought to stop, or at least, slow the eventual building of Interstate to no avail. Construction of the bypass started in March of 1982 and was completed in the summer of 1984. Though McLean was the last Texas Route 66 town bypassed by Interstate 40, the move further reduced its population. Today, McLean is called home to just over 800 citizens. 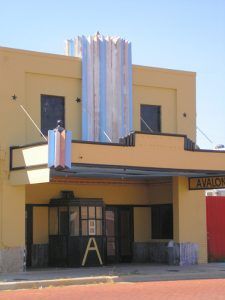 The Avalon Theater in McLean, Texas was razed in 2017 due to safety issues.

However, McLean’s very lack of growth is no doubt why the town today can be experienced as a nostalgic step back in time. Watch for great murals on the buildings as you pass through town!

The McLean Commercial Historic District was placed on the National Register of Historic Places in 2004. Unfortunately, the town lost one of its buildings in the historic district in 2017. The old Avalon Theater, located on Main Street was built in the late 1920s and contained 450 seats. After years of showing movies it was closed by January 1997. Its art deco facade was restored by the Route 66 Association of Texas. However, the building had become dilapidated over the years and one of its back walls was collapsing. It was torn down for safety reasons in August 2017.

McLean is now headquarters of the Texas Historic Route 66 Association located in the Devil’s Rope Museum. A Texas Route 66Newsletter is published quarterly and brochures and other information are available at the first 66 museum on the route.

From McLean, follow the south side frontage road to Alanreed. 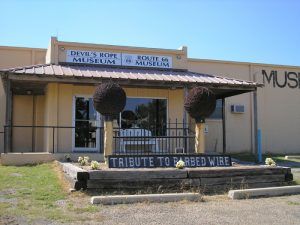