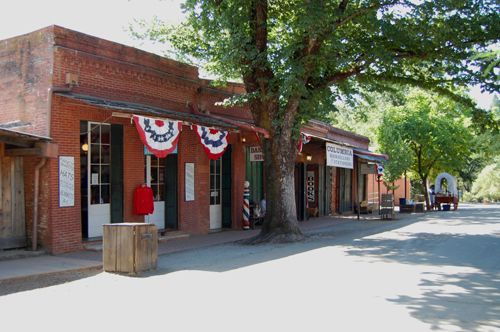 Columbia, California, started in March 1850 when Dr. Thaddeus Hildreth, his brother George, and a couple of other prospectors made camp near here. In just two days, they hit a bonanza, and the gulch yielded more than $4,500 in gold ore. News like that didn’t take long to spread, and the area was soon flooded with thousands of miners hoping to find their fortunes. Within no time, a tent and shack city called Hildreth’s Diggings was formed. The site was later called American Camp before it was changed permanently to Columbia.

Within weeks, the town boomed to about 5,000 people, exclusively men, for the first year. That changed in 1851 when the local community brass band heralded the arrival of the first white woman in the camp. Though the camp was booming, it almost died a certain death in that first year, as the water was in short supply. With no natural streams and water crucial for placer mining, the miners scrambled to find a solution. 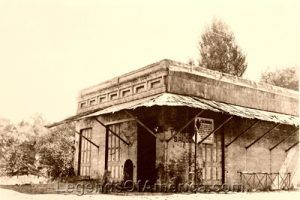 In June 1851, the Tuolumne County Water Company was established to bring water into the area. Unfortunately, the rates were very high; however, the town endured. By 1852, the town sported eight hotels, more than 20 retail stores, four banks, two firehouses, a newspaper, three churches, and over 40 saloons and gambling halls. Most tents and shanties were replaced with wooden structures, and streets were laid out during this time. Known as the “Gem of the Southern Mines,” the town provided all types of entertainment to the many miners of the area. But, like other boisterous mining camps, it was not always known as a peaceful town, as residents often took the law into their own hands, and several men were lynched. At its height of prosperity, Columbia was California’s second-largest city and was even considered briefly as a site for the state capitol of California.

However, in 1854, a devastating fire destroyed six city blocks in Columbia, destroying everything in Columbia’s central business district except one brick building. The residents soon rebuilt some 30 buildings with brick produced locally and reinforced with iron doors and window shutters. Bricks were also laid on the buildings’ roofs to add additional fire protection. 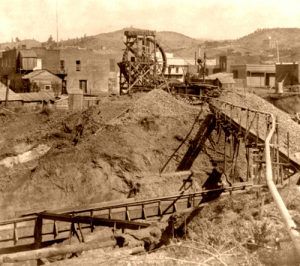 That same year, the Columbia and Stanislaus River Water Company was established to build a 60-mile aqueduct to supply the mines. Though it would be several years before it was completed, the estimated cost involved was more feasible than the high rates paid to the Tuolumne County Water Company to haul the water in.

In July 1855, the New England Water Company began to pipe water into the city for domestic and firefighting purposes. Seven cisterns, each with a capacity of about 14,000 gallons, were built under the streets. Amazingly, these early pipes were utilized until 1950, and some cisterns continue to store water for firefighting today.

Though Columbia was now “armed” with water, in 1857, the city suffered another devastating fire that destroyed all the frame structures in the 13-block business district, as well as several of the brick buildings. Once again, the citizens rebuilt and established a volunteer fire department. One of the department’s fire engines, named “Papeete,” can still be seen today.

By 1858, the Columbia and Stanislaus River Water Company aqueduct was completed, making the gold deposits much more easily worked. Though it had cost more than $1 million to build, the Tuolumne County Water Company acquired the new system for under $150,000. 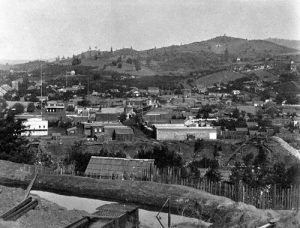 Unfortunately, the Columbia schoolhouse was built in 1860 at about the same time as the gold was beginning to diminish. With the precious metal dwindling in the surrounding hills, Columbia began to decline, especially when copper was discovered in the nearby town of Copperopolis.

In the 1870s and ’80s, those few miners hanging on in Columbia discovered that many of Columbia’s buildings rested on veins of gold ore. Unfortunately, many of the vacated buildings were torn down to get the precious metal. By this time, the once-thriving town’s population had dropped to only about 500.

Unlike other mining towns, the city never truly died as early as the 1920s; people began discussing including Columbia in the new and growing California State Park System. But, it would be years before it occurred. A serious attempt was made in 1934 when the town had become very run down. However, this attempt was unsuccessful. In 1945, though, funds were finally appropriated to restore sections of Columbia and the Columbia State Historic Park born. 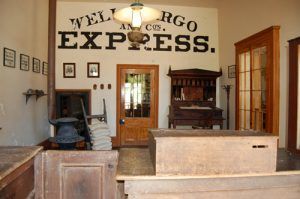 The Wells Fargo Express office, built in 1858, continues to stand by Kathy Alexander.

Today, the state-preserved historic park and a National Historic Landmark preserve the original, gold-rush-town flavor of the town. The historic district features dozens of restored buildings that now feature shops, restaurants, and two hotels. Key buildings include the Wells Fargo Express office, built in 1858, the City Hotel, established in 1856, the first public high school building, one of the oldest in California, and many more. A stroll along the tree-lined Main Street, blocked by automobile traffic, visitors can view an old-time pharmacy, a newspaper office, and a working blacksmith shop. Tourists can ride a 100-year-old stagecoach, pan for gold, or tour an active gold mine.

Today, this quaint little town of about 2,000 people is a “must-see” when exploring the Tuolumne County area of California. 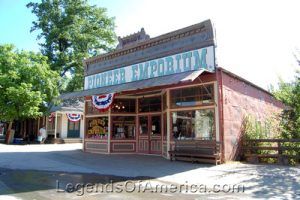 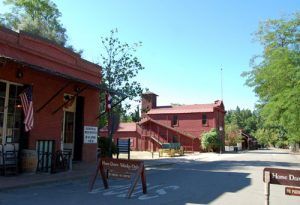 Columbia, California, is one of the most preserved mining camps in the state, by Kathy Alexander.