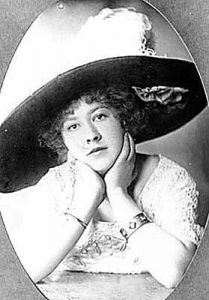 “Working girls” in Deadwood, South Dakota were as prominent a fixture as that of the many miners in the bustling boom camp. Though these “ladies”most likely arrived almost as soon as the first man, the first record of prostitutes coming to Deadwood was in July 1876. Arriving with Charlie Utter’s wagon train, along with Wild Bill Hickok and Calamity Jane, were several “professional” women, including two madams who went by the names of Dirty Em and Madam Mustachio. The two seasoned veterans had previously worked in many of the California and Nevada mining camps. The miners were so pleased to see the women that they lined up along the street and cheered.

A thriving industry in the camp dominated almost entirely by men, in 1876, it was estimated that approximately 90% of women of the camp were “painted ladies.”

Difficult for a woman to make a living in the American West during these times, many single women or those who had lost husbands or fathers to provide for them were almost forced into prostitution in order to support themselves.

In other cases, such as that of Al Swearengen and the Gem Saloon, unsuspecting women were lured to Deadwood with the promise of respectable employment, only to find themselves stranded without money or means and without other options, virtually enslaved in the dance halls or brothels.

These many women not only charged for sexual favors but also hustled drinks, sold “dances,” and were sometimes stage performers.

Largely confined to the Badlands district at the north end of town, saloons and theaters usually occupied the first floors, while the brothels operated upstairs. By the turn of the century, the Badlands occupied an entire block of two-story buildings on the west side of Main Street.

Often these women faced violence and turned to drugs and alcohol as a means of escape. Opium, laudanum, and morphine, with laudanum being the most often used. Unfortunately, doctors often started the “girls” use of the drug to reduce the number of calls he would receive. At other times, it was their employers who got them started on the drugs, in order to better control them. Suicides were common in the camp and Dr. F.S. Howe, the only doctor in Deadwood during its earliest days, always carried his stomach pump when summoned to the Badlands in the middle of the night.

Having little protection from the law or anyone else, the women were often abused by their customers and employers. On one occasion, a Gem Theatre prostitute named Tricksie, shot a man through the head after he beat her up. When Howe arrived, he was amazed that the man was still alive, even after putting a probe all the way through his head.  However, this nameless man died about thirty minutes later. 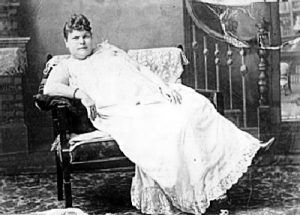 The men, too, were often at risk as prostitutes sometimes helped themselves to any gold, money or valuables that might have been in their pockets. However, this was generally not the case as most of the women prospered, at least in the beginning, due to the high demand of their “services.”

Though they obviously didn’t keep official records of their business dealings and financial affairs, they were generally paid in gold dust, which was worth about $20 an ounce when those first “sporting girls” arrived. Outnumbering the girls 200 to 1, the men were quick to provide a pinch or two of dust for female companionship.  In the beginning, when “services” were not so available, the “pinches” were bigger. Rumors of the time suggested that the youngest and most beautiful girls sometimes received as much as three ounces of gold dust.

Before permanent buildings were erected, much of the business was conducted inside tents or covered wagons, but it didn’t take the Madams long to establish regular brothels where the women could work.

Obviously it was the Madams who really made the money from the 40% share she took from the girls, but even more so, from the sale of liquor. Visitors to the “house” were “expected” to buy a drink, as well purchasing another for any “lady” that they might be spending time with.

For her share of the take, the Madam provided room, board, and “protection” to her girls; however, the women were required to pay for their own clothing and personal necessities.

As prostitution waned in nearby areas when laws were passed and “proper” women charged forward to ensure compliance, Deadwood’s “service businesses” continued to thrive. In fact, it was so profitable, that many of the madams began to have branch houses in nearby Belle Fourche, Sturgis, Keystone, Custer, Hay Camp, (later known as Rapid City), and other areas. There was even a floating barge brothel on the Belle Fourche River to the north.

When the gold rush was over, the girls remained and the houses were one of the primary supports of the local economy through Prohibition and the Depression. The upstairs floors on Main Street were as much an integral part of Deadwood as the legends of Wild Bill Hickok and Calamity Jane. 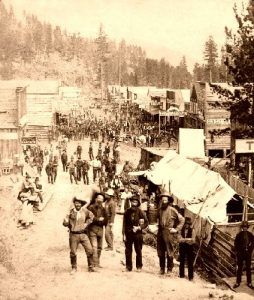 Deadwood, South Dakota from the south, 1876.

Despite state laws forbidding prostitution, no city ordinance was ever passed in Deadwood to outlaw the practice and for decades, the prostitution business went on with little interference from the outside world and little care by the locals for what the rest of the nation might be doing. Only briefly did they close, in 1952, when an ambitious young attorney and newcomer to Deadwood was elected as States Attorney. He soon raided the houses and closed them down; however, not only did his move fail in furthering his ambitions, the houses were reopened just six months later due to a technicality. When he ran for reelection soon after the abortive attempt, he lost.

For another 28 years, the brothels continued to prosper until 1980 when the FBI raided them. The alleged cause was rumors that girls as young as 14 were being “sold” by biker gangs. After grabbing the girls and placing them in vans, the authorities then padlocked the four remaining open brothels.

But, the people of Deadwood were stumped as to the brothels’ closings, asking the proverbial question, “Why?” To this, the Deadwood police chief replied: “I haven’t the foggiest.” Then, “I suppose it was because we hadn’t done anything about it before.”

Most of the local residents hoped the 1980 closing would just “go away,” as the support for the “girls” went far beyond tolerance, insisting that they contributed to the economic base of the city.  One businessman said of the whole affair: “They’re a public service, not a public nuisance.”

However, to ensure prostitution wasn’t revived in Deadwood, officials were said to have continued to occupy the upstairs apartments on Main Street for years afterward.

After more than a century, a Deadwood institution had been closed forever and most of the out-of-work girls moved on. Though the sporting ladies of the gulch may be gone, they are not forgotten as Deadwood continues to celebrate them in parades, stories, and musical revues.