“A sea of sin, lashed by the tempests of  lust and passion.”
— Reverend F.M. Warrington said of Bodie, California in 1881 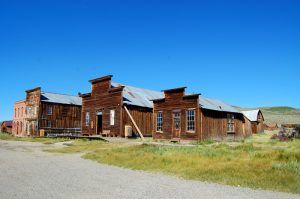 Buildings in the ghost town of Bodie, California by Kathy Weiser-alexander.

When mining began to decline along the western slope of the Sierra Nevada, prospectors began to cross the eastern slope in search of their fortunes. One such man named William (aka: Waterman) S. Bodey, discovered gold near a place that is now called Bodie Bluff in 1859. Alas, the poor man died in a snowstorm that very winter and never saw the new town that would be named after him.

Though one legend attributes the change of spelling to an illiterate sign painter, the citizens deliberately changed the spelling in order to ensure correct pronunciation.

In 1861 the Bunker Hill Mine was established as well as a mill, though the camp was called home to only about 20 miners. Bodie grew slowly and remained an insignificant mining camp for 17 years. The Bunker Hill Mine and Mill, on the west slope of Bodie Bluff, changed hands several times during the years before being sold to four partners in 1877. The name was changed to the Standard Mining Company and within months the partners discovered a significant vein of rich gold ore. Profits rose dramatically and by the end of 1878 Bodie’s population had soared to some 5,000 people. The Standard Mine would yield nearly 15 million dollars in gold over the next 25 years. 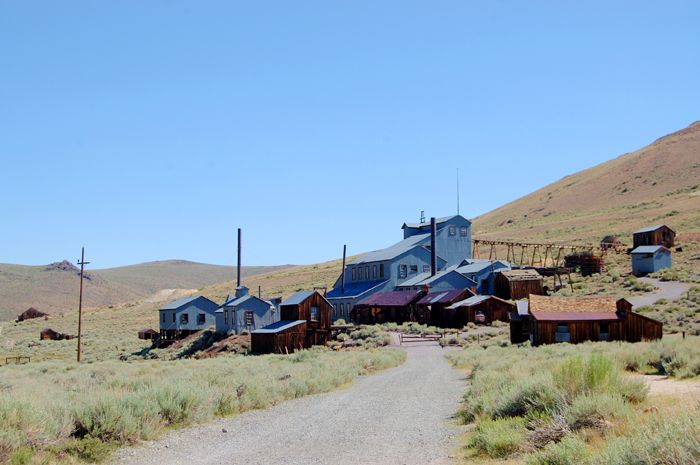 Standard Mine and Mill in Bodie, California by Kathy Weiser-Alexander.

During the winter of 1878-79 Bodie’s citizens saw many hardships. Particularly savage, the winter claimed hundreds of lives from exposure and disease. Falling timber in the mines and the explosion of a powder magazine took additional lives. 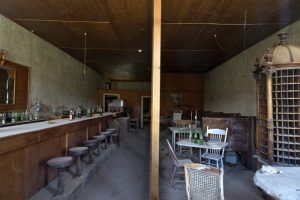 Miners, gamblers, and business continued to flood the area and by 1879, Bodie boasted a population of about 10,000 and 2,000 buildings. Before long the town supported some 30 gold mines, 65 saloons, numerous brothels, gambling halls, and opium dens, as well, as a number of legitimate businesses, including three newspapers, several churches, a couple of banks and a school. Every other building on the mile-long main street was a saloon. Three breweries worked day and night, while whiskey was brought into town in 100-gallon barrels.

Like many booming mining camps, Bodie soon earned a reputation for violence and lawlessness. Killings were sometimes daily events and robberies, stage holdups and street fights were common occurrences in the camp.

In its day, Bodie was more widely known for its lawlessness than for its riches. Of Bodie, the Reverend F.M. Warrington would describe it in 1881 as “a sea of sin, lashed by the tempests of lust and passion.”

Given Bodie’s reputation, it is perhaps not surprising that one little girl, whose family was moving to the mining town, reportedly prayed: “Goodbye God! We are going to Bodie.” 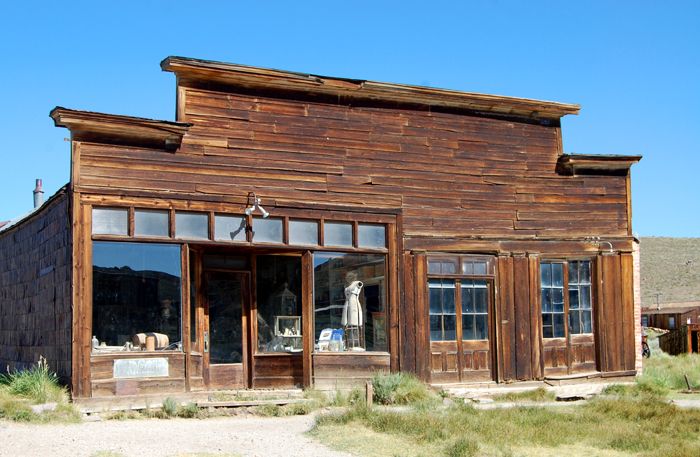 Bodie needed milled wood for construction, mineshaft beams and heating; however, there were few trees in the area. Soon several businessmen formed the Bodie & Benton Railroad in 1881 for the sole purpose of transporting lumber.

Like other railroads in the West, the Bodie & Benton Railroad hired inexpensive Chinese labor, much to the outrage of locally unemployed miners.  By 1882 the 32 mile-long railroad was in service between Bodie and Mono Mills, along the east shore of Mono Lake. Though the metal rails have long since been sold as scrap, you can still see the old railroad grade not far from the remote eastern shores of Mono Lake. 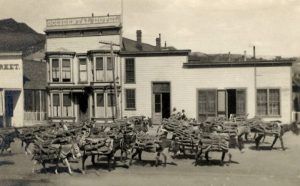 Many immigrants and ex-miners homesteaded around Mono Lake in the hopes of making a simple living off the land. Early Mono Basin ranchers often had plentiful food and stock and provided supplies to the local mining towns of Bodie and Lundy.

The boom was over just four short years later and by 1882, Bodie started to decline. Its population had dropped to just 3,000 as several smaller mining companies went bankrupt and people began to leave the area in search of better opportunities.

Prior to 1882, there were no churches in Bodie; however, there were two preachers, Reverend Hinkle, a Methodist, and Father Cassin, a Catholic. Services were held in private homes and later in the I.O.O.F. (Independent Order of Odd Fellows) Building and the Miner’s Union Hall. 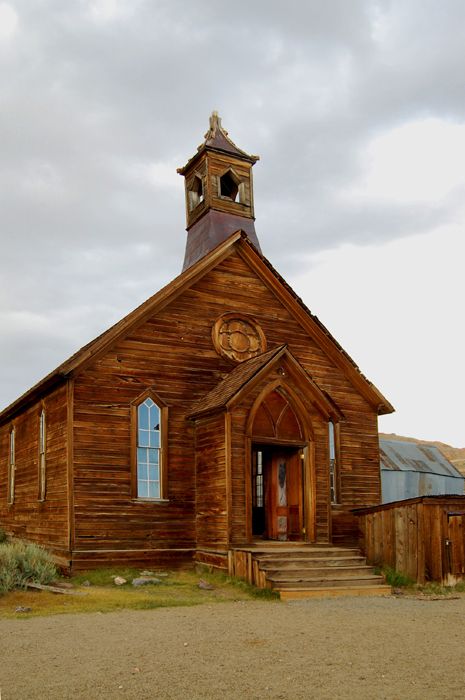 The two major mines — the Bodie and the Standard, merged in 1887 and continued to operate successfully for the next two decades. While the boom lasted, some 30 companies produced $400,000 in ore per month for an overall total estimated at $90 to $100 million.

In 1892 a fire ravaged much of the business district, further depleting Bodie’s population. Additional mines began to close. However, the very next year Bodie became one of the first mining camps to use electricity. Another fire destroyed the Mill in 1898, but it was rebuilt the following year. 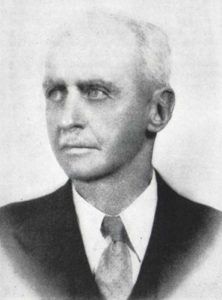 By 1915, most of the important mines were controlled by James Stewart Cain who had arrived in Bodie when he was just 25 years old. Soon after his arrival, he entered the lumber business transporting timber on barges across Mono Lake. He would grow so successful that he eventually would own the Bodie bank, leased the Mono Lake Railway & Lumber Company (formerly known as the Bodie and Benton Railroad,) became the town’s principal property owner, and the owner of the Standard Mill. However, the Standard Mill was closed around 1916 and just a year later the Bodie and Benton Railway was abandoned.

In 1932 another devastating fire, caused by a 2 ½-year-old boy playing with matches, destroyed 95% of Bodie’s buildings.

Though Bodie was already dying, further decline resulted from Prohibition and the Great Depression. While some mining continued, there were no new strikes and companies eked out only minor profits, largely by using the cyanide process to extract gold from old tailings.

However, a few people continued to live in Bodie until after World War II, when the last producing, mine, the Lucky Boy was shut down.

By then only six people were left in the old settlement and five of these would soon die untimely deaths. First, one of the men shot his wife and after she died, three men killed the murdering husband. According to legend, the ghost of the murdered man would visit the three men, shaking his fist. Soon, all three would die of strange diseases. 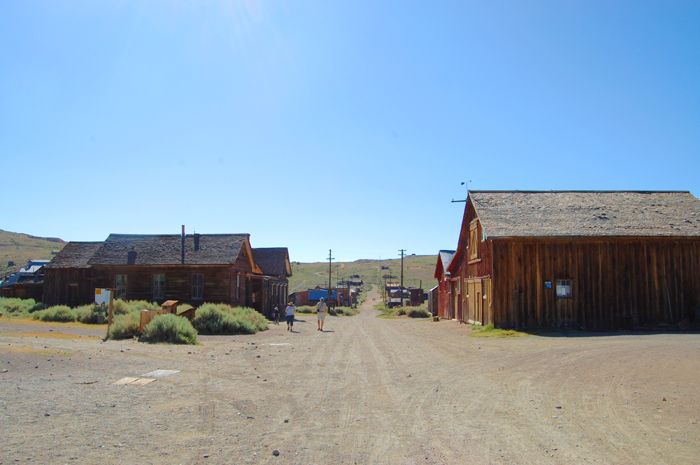 A street in Bodie, California today by Kathy Weiser-Alexander.

By the end of the 1940s, Bodie was a ghost town and was visited only by tourists interested in its history.

In 1962, after years of neglect, Bodie became a State Historic Park, and two years later the ghost town of Bodie was dedicated as a California Historic Site. It has also been designated a National Historic Site.

Continue next page for Bodie legends and reader’s experiences.