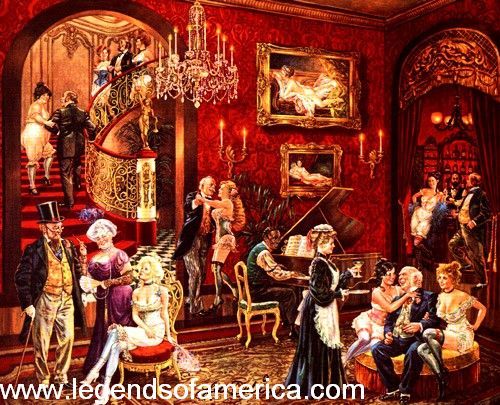 The Bordello, painting by Lee Durbin

First came the miners to work in the mine,
Next came the ladies who lived on the line.
— Old Western Mining Adage

Though all manner of brothels, cat-houses, and cribs thrived throughout the American West, those “parlor houses” that were elegantly furnished and had the most beautiful and desirable women, were obviously the most profitable. These better establishments were run by a female owner called a “madame.” This was usually an older woman who had “paid her dues” by practicing the same profession as those who worked for her. Many of these women became legends of the Old West for the popularity of their “houses,” the people they came into contact with, or events that occurred in their lives.

The running of a parlor house or brothel was often a very profitable business and the most successful madames were extremely adept businesswomen, who amassed not only wealth, but real estate, fine horses, and other material goods.

First-class places set a good table and prided themselves on their cellars, offering choice cigars, bonded bourbon, and the finest liquors and wines. Customers could often enjoy champagne suppers and sing with the girls around the piano. In very high-class parlor houses, the women could only be seen by appointment.

The girls’ rooms were always on the second floor if there was one. Parlor houses would usually average six to 12 girls, plus the madame, who entertained only those customers she personally selected. Some of the more famous madames charged as much as $1,000 for their services, such as Cripple Creek, Colorado’s famous madame, Pearl de Vere.

Madames provided for the women who worked for them, a number of services, primarily protection, often employing “bouncers” who would rid the house of any “rif-raf.” Sometimes, room and board were also provided, though, at others, the soiled doves paid rent. The madame would then take a split of the money earned by the “girls,” an amount that varied from house to house, and the “services” provided by the madame.

In parlor houses as well as brothels, much of the profit came from drinks served. Prices on these drinks were raised considerably. Sometimes the madame kept all the money taken in from alcohol sales, other times she gave the girls a small commission to encourage them to ply the customer with the high-priced drinks.

The most successful landladies maintained, at least on the ground floor, a strict air of respectability and a charming home life. They also insisted that their girls wear corsets downstairs and forbade any “rough stuff.”

Though the parlor house business was not accepted by society, the madames paid their share of revenue to the community in taxes and in fines to corrupt police officials. They were also expected to contribute to charity.

But, for the prosperous madames of the Old West era, times would change at the turn of the century when moral reform began to run out the madames, soiled doves, fancy parlor houses, and lowly cribs  — at least as they had existed in such a “public way.”

Some of the more “famous” women who left their mark via their illustrious professions were Squirrel Toothed Alice, Dora Dufran, Eleanore “Madame Mustache” Dumont, “Chicago Joe” Hensley, and dozens of others.