The Peninsula Campaign, also known as the Peninsular Campaign, was a Union offensive that took place from March through July 1862, to capture Richmond. The strategic concept was the brainchild of Union Army Commander-in-Chief Major General George B. McClellan, who felt his Army of the Potomac could avoid high casualties by not marching south on Richmond from northern Virginia, but rather, by moving by water. 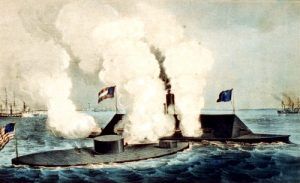 Hampton Roads (March 8-9, 1862) – Also referred to as the Monitor vs. the Virginia (Merrimack), or the Battle of the Ironclads, this skirmish took place on March 8th and 9th, 1862 at Hampton Roads, Virginia.

Involving four U.S. and one Confederate warship, the principal commanders were Lieutenant John Wordon and Captain Franklin Buchanan for the Union and Lieutenant Catesby R. Jones for the South. On March 8, 1862, from her berth at Norfolk, the Confederate ironclad Virginia steamed into Hampton Roads where she sank the Cumberland and ran the Congress aground.

On March 9, the Union ironclad Monitor, having fortuitously arrived to do battle, initiated ironclads’ first engagement in history. The two ships fought each other to a standstill, but Virginia retired.

The battle resulted in an estimated 433 casualties, of which 409 were Union, and 24 were Confederate. 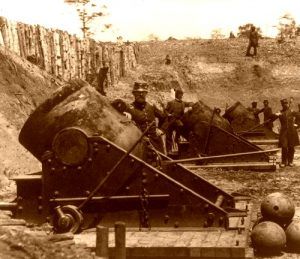 Yorktown (April 5-May 4, 1862) – The Yorktown battle took place in York County and Newport News, Virginia, from April 5th to May 4th, 1862. Marching from Fort Monroe, Major General George B. McClellan’s army encountered Major General John B. Magruder’s small Confederate army at Yorktown behind the Warwick River.  Magruder’s theatrics convinced the Federals that his works were strongly held. McClellan suspended the march up the Peninsula toward Richmond, ordered the construction of siege fortifications, and brought his heavy siege guns to the front. In the meantime, General Joseph E. Johnston brought reinforcements for Magruder. On April 16th, Union forces probed a Confederate line weakness at Lee’s Mill or Dam No. 1, resulting in about 309 casualties.

Failure to exploit this attack’s initial success, however, held up McClellan for two additional weeks, while he tried to convince his navy to maneuver the Confederates’ big guns at Yorktown and Gloucester Point and ascend the York River to West Point, thus outflanking the Warwick Line. McClellan planned for a massive bombardment to begin at dawn on May 4th, but the Confederate Army slipped away in the night toward Williamsburg. Casualties during the battle were estimated at about 320. 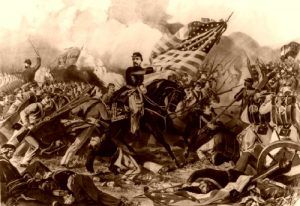 Williamsburg (May 5, 1862) – Also called the Battle of Fort Magruder, the conflict took place in Williamsburg, Virginia, on May 5, 1862. In the first pitched battle of the Peninsula Campaign, nearly 41,000 Federals and 32,000 Confederates were engaged. Following up the Confederate retreat from Yorktown, Hooker’s division encountered the Confederate rearguard near Williamsburg. Hooker assaulted Fort Magruder, an earthen fortification alongside the Williamsburg Road, but was repulsed. Confederate counterattacks, directed by Major General James Longstreet, threatened to overwhelm the Union left flank until Kearny’s division arrived to stabilize the Federal position. Hancock’s brigade then moved to threaten the Confederate left flank, occupying two abandoned redoubts.

The Confederates counterattacked unsuccessfully. Hancock’s localized success was not exploited. The army continued its withdrawal during the night. Of more than 72,000 troops engaged, the estimated casualties were 3,843, 2,283 of which were Union, and 1,560 Confederate.

Eltham’s Landing (May 7, 1862) – Also referred to as the Battle of Barhamsville or West Point, this skirmish took place in New Kent County, Virginia, on May 7, 1862. When Union Brigadier General William B. Franklin’s division landed at Eltham’s Landing, they were attacked by two brigades of Major General Gustavus W. Smith’s command, reacting to the threat to the Confederate army’s trains on the Barhamsville Road. Franklin’s movement occurred while the Confederate army was withdrawing from the Williamsburg line. Estimated casualties were 242 – 194 Union and 48 Confederate. 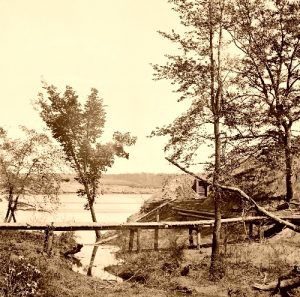 Drewry’s Bluff  (May 15, 1862) – Also called Fort Darling or Fort Drewry, this conflict occurred in Chesterfield County, Virginia, on May 15, 1862. With the fall of Yorktown, the Confederate ironclad Virginia at Norfolk was scuttled to prevent her capture. This opened the James River to Federal gunboats. On May 15, five gunboats, including Monitor and Galena’s ironclads, steamed up the James River to test the Richmond defenses. They encountered submerged obstacles and deadly accurate fire from the batteries at Drewry’s Bluff, which inflicted severe damage on the Galena. The Federal Navy was turned back. The Confederate victor resulted in estimated total casualties of 41.

Hanover Court House (May 27, 1862) – Sometimes referred to as the Slash Church Battle, this confrontation took place in Hanover County, Virginia, on May 27, 1862. On that day, elements of Brigadier General Fitz John Porter’s V Corps extended north to protect the right flank of McClellan’s Union army that now straddled the Chickahominy River. Porter’s objective was to cut the railroad and open the Telegraph Road for Union reinforcements under Major General Irvin McDowell that were marching south from Fredericksburg.  Confederate forces under the command of Brigadier General Lawrence O’Bryan Branch, attempting to prevent this maneuver, were defeated just south of Hanover Courthouse after a stiff fight. However, the Union victory was moot for McDowell’s reinforcements were recalled to Fredericksburg upon word of Banks’ rout at First Winchester. In the end, some 1,327 were dead, included 397 Union men and 930 Confederate.