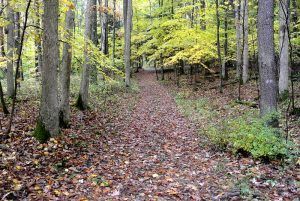 Braddock’s Road was a military road built in 1755 in what was then British America. It was the first improved road to cross the ridgelines of the Appalachian Mountains.

The road was constructed by troops of the Virginia Militia and British soldiers commanded by General Edward Braddock. In 1755, Braddock was sent to on an expedition to conquer the Ohio Country from the French at the beginning of the French and Indian War. At that time, George Washington was an aide-de-camp to General Braddock and the expedition gave him his first field military experience

Starting from Fort Cumberland, Maryland, Braddock’s army cut a military trail through the wilderness, roughly following, an ancient Lenape Indian trail. While attempting to remove the French from Fort Duquesne at present-day Pittsburgh, Pennsylvania on July 9, 1755, he was met with defeat and was fatally wounded. He was carried off the field by George Washington and another officer. Four days after the battle, he died on July 13th. He left Washington with his ceremonial sash that he wore with his battle uniform, which reportedly, Washington carried with him everywhere for the rest of his life. It is on display today at Washington’s home, Mount Vernon, Virginia. 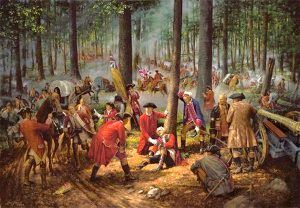 General Braddock was buried just west of Great Meadows, where the remnants of the column halted on its retreat to reorganize. George Washington presided at the burial service, as the chaplain had been severely wounded. The grave was found years later by road workers and it was moved. It is now marked by a marble monument erected in 1913. It is located one mile west of Fort Necessity, Pennsylvania.

The Braddock Road was later utilized by numerous settlers moving westward, so much so, that in 1806, the Federal Government constructed the first totally federally funded highway. This highway, first called the National Road, eventually stretched from Cumberland, Maryland to Vandalia, Illinois. Closely paralleling Braddock’s route, the National Road carried thousands westward and later figured prominently in the Underground Railroad helping slaves escape before the Civil War. Today, the path is closely followed by U.S. Route 40.

A portion of the original trail can be hiked along a 1 ½ mile-long pathway at Fort Necessity, Pennsylvania.