The name of Valley Forge has come to stand, and rightly so, as a patriotic symbol of suffering, courage, and perseverance. The hardcore of continentals who stayed with General George Washington during that bitter winter of 1777–1778 suffered much. Supply problems caused some men to go without shoes, pants, and blankets. Weeks passed when there was no meat, and men were reduced to boiling and eating their shoes. It was no place for “summer soldiers and sunshine patriots.”

The symbolism of Valley Forge should not be allowed to obscure that the suffering was largely unnecessary. While the soldiers shivered and went hungry, food rotted, and clothing lay unused in depots throughout the country. True, access to Valley Forge was difficult but made a little-determined effort to get supplies into the area. The supply and transport system had broken down. In mid-1777, both the Quartermaster and Commissary Generals resigned, and numerous subordinate officials in both departments, mostly merchants who found private trade more lucrative. Congress, in refuge at York, Pennsylvania, and split into factions, found it difficult to find replacements. As most historians now believe, if there was not an organized unit seeking to replace Washington with General Horatio Gates, there were many, both in and out of the Army, who were dissatisfied with the Commander in Chief; and much intrigue went on. Gates was made President of the new Board of War set up that winter, and at least two of its members were Washington’s enemies. In the administrative chaos at the height of the Valley Forge crisis, there was no functioning Quartermaster General at all. 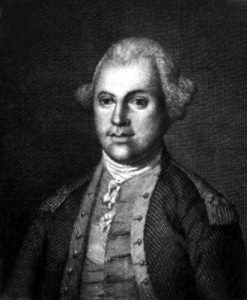 Washington weathered the storm, and the Continental Army would emerge from Valley Forge a more effective force than before. With his advice, Congress instituted reforms in the Quartermaster and Commissary Departments that temporarily restored the effectiveness of both agencies. Washington’s ablest subordinate, General Nathanael Greene, reluctantly accepted the post of Quartermaster General. The Continental Army itself gained a new professional competence from the training given by Friedrich von Steuben. Steuben appeared at Valley Forge in February 1778. He represented himself as a baron, a title of dubious validity, and as a former lieutenant general on the staff of Frederick the Great. (In reality, he had been only a captain. The fraud was harmless, for Steuben had a broad knowledge of military affairs and had the ability to communicate with the American soldiers and teach them the basics of their new craft.) Appointed by Washington as Inspector General in charge of a training program, Steuben vigorously drilled the troops that remained under arms during the winter of 1777–1778 at Valley Forge. He taught the Continental Army a simplified but effective version of the drill formations and movements of European armies and the proper care of equipment and supplemented American marksmanship with instruction on using the bayonet, a weapon in which British superiority had previously been marked. Steuben never lost sight of a major difference between the American citizen-soldier and the European professional all through the training.

He early noted that American soldiers had to be told why they did things before doing them well, and he applied this philosophy in his training program. His trenchant good humor and vigorous profanity delighted the Continental soldiers and made the rigorous drill more palatable. After Valley Forge, continentals would fight on equal terms with British regulars in the open field. 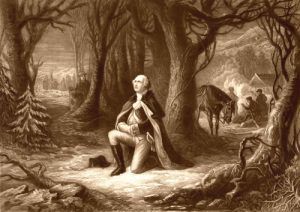 The prayer at Valley Forge, by H. Brueckner

After a disappointing fall campaign that ended with a British army occupying Philadelphia, George Washington cast about for winter quarters for his troops. He found a site among the thickly wooded hills around Valley Forge. The American camp lay somewhat to the north but within easy striking distance of the main road from Philadelphia to York, where the Continental Congress had taken refuge. This allowed his army to protect the revolution’s governing body. Valley Forge lay in a rich agricultural region that the contending armies had picked over extensively during the previous year. Dependent almost entirely on a wretchedly mismanaged supply system, the Americans were chronically short of food and clothing through much of the winter until General Nathanael Greene, one of America’s ablest commanders, took over as Quartermaster General. Steuben’s drill instruction has received wide credit for bolstering American morale, but Greene’s efficiency proved equally important. In June 1778, the Continental Army finally marched out of Valley Forge to face the British again; it was well prepared in mind and body for what would follow.

Compiled and edited by Kathy Weiser/Legends of America, updated August 2021.