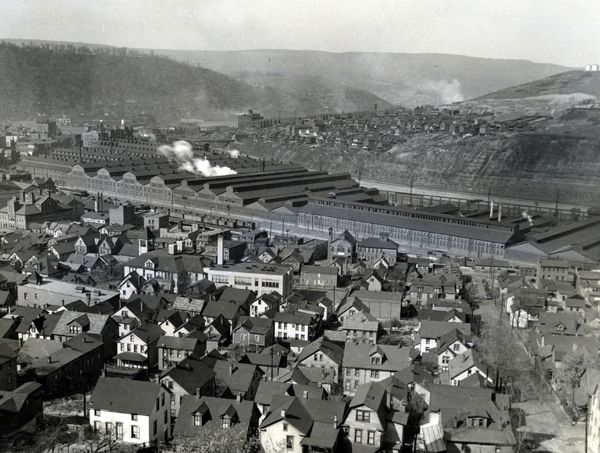 On a cool May afternoon in 1889, the residents of Johnstown heard a thunderous roar as a man-made disaster swept through town. It would be the most devastating flood of the 19th century in the United States.

Founded in 1794, Johnstown, Pennsylvania began to prosper with the building of the Pennsylvania Mainline Canal in 1834 and the arrival of the Pennsylvania Railroad and the Cambria Iron Company in the 1850s. There was one small drawback to living in the city. Johnstown had been built on a floodplain at the fork of the Little Conemaugh River and Stony Creek. Because the growing city had increased the runoff from the surrounding hills by stripping them for wood and had narrowed the river banks to gain building space, the heavy annual rains had caused increased flooding in recent years. 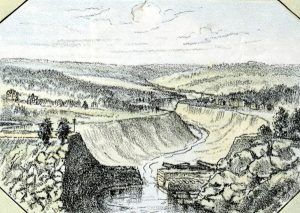 The South Fork Dam was built between 1838 and 1853 by the Commonwealth of Pennsylvania to provide water for the operation of the Western Division of the Pennsylvania Mainline Canal between Johnstown and Pittsburgh. Though the dam had been built according to accepted engineering practices, the canal system was obsolete by the time the dam was completed in 1853.

Located some 14 miles east of Johnstown at a point where the South Fork branch of the Little Conemaugh River and several mountain streams converged, the dam created what was, at the time, one of the largest artificial lakes in the nation, more than two miles long and nearly a mile wide in some places. Lake Conemaugh was held by the dam on the side of a mountain, 450 feet higher than Johnstown. The Pennsylvania Railroad Company purchased the entire Mainline works in 1857 and left the dam and the reservoir virtually unattended. In 1862 a break occurred near the discharge pipes, but little damage resulted because the water level was so low. Afterward, the railroad abandoned the dam, and it deteriorated 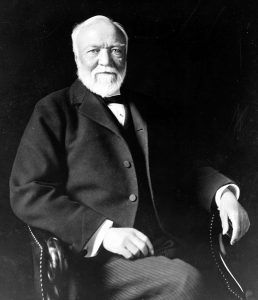 In 1879 a group of wealthy Pittsburgh industrialists, including such men as Andrew Carnegie and Andrew Mellon, formed the South Fork Fishing and Hunting Club and bought the dam and the reservoir as an exclusive and somewhat secret summer resort. By 1881 the dam had been repaired, without the benefit of an engineer, and the reservoir filled to capacity to form the now nearly three-mile-long Lake Conemaugh. A clubhouse with 47 rooms fronted the lake. From its large porch, members could watch the club’s two steam yachts setting off on excursion trips. A number of club members built large cottages nearby. For the next eight years, the summer resort offered fishing, hunting, boating, and other recreational opportunities for club members.

Over the years, some people worried about the 72-foot-high earthen dam, one of the largest earthen dams in the world, causing one resident to remark:

“No one could see the immense height to which that artificial dam had been built without fearing the tremendous power of the water behind it….”

Others wondered and asked why the dam had not been strengthened, as it certainly had become weak, making Johnstown vulnerable. Daniel J. Morrell, president of Cambria Iron Company, was one of those worried about the dam and made repeated requests that the dam be strengthened. However, Benjamin Ruff, the first president of the South Fork Club, responded by saying: “You and your people are in no danger from our enterprise.” 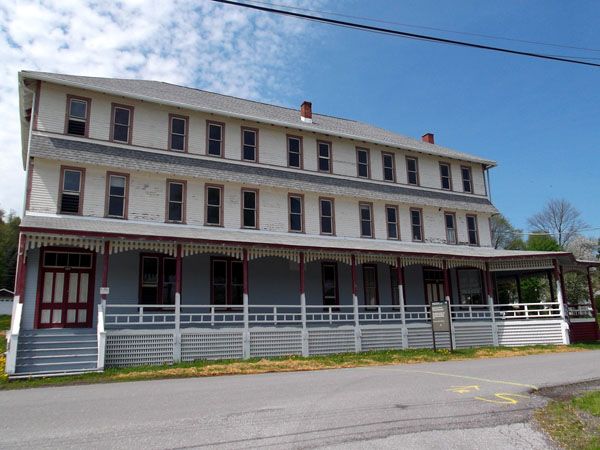 In the end, nothing was done and by and by, most Johnstown residents talked less and less about it. Others, realizing their continuing vulnerability, called the dam “the sword of Damocles hanging over Johnstown.”

By 1889, Johnstown had grown to a town of 30,000 German and Welsh immigrants, known for the quality of the steel it produced.

On May 30, 1889, after unusually heavy rains hit the area, the citizens of Johnstown were warned three times of a possible impending flood if the dam didn’t hold. But, that had been the case every spring for so many years, that it the supposed threat had become something of a standing joke around town. And wasn’t the dam being maintained by some of the richest and most powerful men in America?

While some people in Johnstown made the usual preparations for flooding, John Parke, the club engineer who was at the South Fork Dam, knew things were more serious. Watching the lake rising an inch every 10 minutes, he knew that once the water ran over the top of the earthen dam, it would cut through it like a knife and the whole thing would go. His workers desperately tried to dig another spillway and increase the height of the dam, but the water was rising too fast. Parke was caught in a painful dilemma. He could cut through the end of the dam, where the pressure was less, so it would give way more slowly and reduce the water’s destructive force. But afterward, how could he prove that the dam would have gone anyway? People would know only that he was the one who destroyed the dam and flooded the valley. He chose not to do it.

“The fearful rushing waters opened the gap with such increasing rapidity that soon after the entire lake leaped out… It took but forty minutes to drain that three miles of water.” — John Parke, South Fork Engineer

At 4:07 p.m., Johnstown inhabitants heard a low rumble that grew to a “roar like thunder.” Some knew immediately what had happened: after a night of heavy rains, South Fork Dam had finally broken, sending 20 million tons of water crashing down the narrow valley. The water took its natural course, dropping 450 feet in 14 miles, at times 70 to 75 feet high, and reaching speeds of 40 miles per hour. In 57 minutes the wave would engulf the town.

Most never saw anything until the 36-foot wall of water, already boiling with huge chunks of debris, rolled over them at 40 miles per hour, consuming everything in its path. Those who did see it said it “snapped off trees like pipe stems,” “crushed houses like eggshells,” and “threw around locomotives like so much chaff.” A violent wind preceded it, blowing down small buildings. Making the wave even more terrifying was the black pall of smoke and steam that hung over it–the “death mist” remembered by survivors.

Thousands of people desperately tried to escape the wave, but they were slowed as in a nightmare by the two to seven feet of water already covering parts of town. One observer from a hill above the town said the streets “grew black with people running for their lives.” Some remembered reaching the hills and pulling themselves out of the flood path seconds before it overtook them. Those caught by the wave found themselves swept up in a torrent of oily, yellow-brown water, surrounded by tons of grinding debris, which crushed some and provided rafts for others. Many became helplessly entangled in miles of barbed wire from a destroyed wire works. People indoors when the wave struck raced upstairs seconds ahead of the rising water, which reached the third story in many buildings. Some never had a chance, as homes were immediately crushed or ripped from foundations and added to the churning rubble, ending up hundreds of yards away. Everywhere people were hanging from rafters or clinging to rooftops as railcars were swept downstream, frantically trying to keep their balance as their rafts pitched in the flood.

It was over in 10 minutes, but for some, the worst was still to come. Thousands of people huddled in attics or on the roofs of buildings that had withstood the initial wave, were still threatened by the 20-foot current tearing at the buildings and jamming tons of debris against them. In the growing darkness, they watched other buildings being pulled down, not knowing if theirs would last the night. 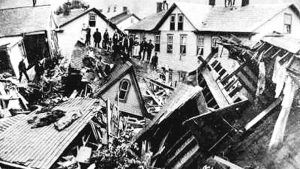 Fallen buildings in the Johnston Flood in Pennsylvania

But the most harrowing experience for hundreds came at the old stone railroad bridge below the junction of the rivers. There, thousands of tons of debris scraped from the valley along with a good part of Johnstown, piled up against the arches. The 45-acre mass held buildings, machinery, hundreds of freight cars, 50 miles of track, bridge sections, boilers, telephone poles, trees, animals, and 500 to 600 humans. The oil-soaked jam was immovable, held against the bridge by the powerful current and bound tightly by the barbed wire.

Those who were able began scrambling over the heap toward shore. But many were trapped in the wreckage, some still hopelessly hung up in the barbed wire, unable to move. Then the oil caught fire. As rescuers worked in the dark to free people, the flames spread over the whole mass, burning with “all the fury of hell,” according to a Johnstown newspaper account. Eighty people died at the bridge, some still in their own homes. 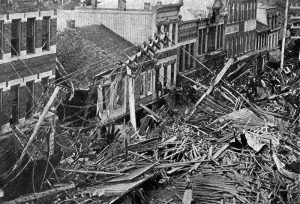 Main Street in Johnstown after the flood

The next morning survivors were unsettled by the eerie silence hanging over the city. During the night the waters had receded, revealing vast heaps of mud and rubble-filled streets — where there were still streets — up to the third story. Entire blocks of buildings had been razed. Hundreds, alive and dead, were buried beneath the ravaged city. Many bodies were never identified, and hundreds of the missing were never found.

As everyone had dreaded, disease followed in the wake of the flood, and typhoid added 40 more lives to the 2,209 that had already died. Emergency morgues and hospitals were set up, and commissaries distributed food and clothing. The nation responded to the disaster with a spontaneous outpouring of time, money, food, and clothing. Contributions from the United States and abroad totaled over $3,700,000. The flood also provided the newly formed American Red Cross under the leadership of Clara Barton with its first test. Barton and her staff of 50 doctors and nurses arrived in Johnstown five days after the flood. After surveying the scene, she set up hospital tents and built six Red Cross “hotels” for the homeless. Barton and her crew remained in Johnstown until October when the city was finally able to begin rebuilding itself.

Today, the Johnstown Flood National Memorial in South Fork, Pennsylvania commemorates the most devastating flood of the 19th century in the United States and the greatest national catastrophe in the post-Civil War era. It is an example of what can happen when people disregard the principles of engineering and hydrology. The flood provided vast literature with important lessons for environmental management today. At present, all that remains of the historic earthen dam (originally about 900 feet long and 75 feet high) are the north and south abutments, the spillway cut around the north abutment to carry off excess water, and a few remnants of wood and culvert foundation stones representing the location of the control mechanism. 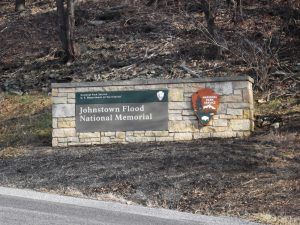