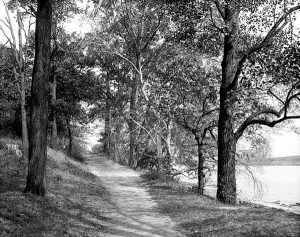 When European settlers first arrived in Pennsylvania, they found numerous trails blazed by American Indians. Most early settlers and traders first utilized these roads but they weren’t wide enough for wagons or anything beyond single-file trains of pack-horses. This changed when the military began to follow the same paths to blaze wider trails that would allow for wagon travel and larger groups. The first “official” road built through the state was Braddock’s Road, in 1755 at the beginning of the French and Indian War. This was followed by Forbes Road in 1758. In the 1790s, however, Pennsylvania and the rest of the new nation embarked on massive road-building campaigns to improve inland trade and open marketplaces in hard-to-reach areas.