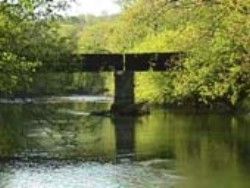 I worked in the Coatesville Service Building in Chester County, Pennsylvania. Usually, I would arrive at work about 4:00 a.m. to prep the schedules for the Work Week Managers and was generally alone for a couple of hours. The strange events began one morning as I was sitting at my computer, enclosed in a cubicle with a wall that only went ½ way up the way, and I could see out into the hall from where I sat.

For several mornings in a row, I noticed the lights in the hall would turn off and then on, in a series – one went out, then the next, and so on. I thought nothing of it, other than the fact that it seemed a bit strange that they would go out in a pattern.

Then one morning, I saw a lady, with her head down, walk from the hallway into the doorway near my desk. Wet hair was hanging down around her lowered face, and she seemed very sad. She had a blue denim top with white stripes running across and a gold spot highlighted over her heart.

I thought she was just some person that had come into the building off the street. She looked at me, and I looked at her, then she passed to the right of me down the other hallway. When I jumped up to follow her, there was no one there. I checked the halls, the bathrooms, and still, no sight of anyone. The next morning she returned — woeful, the same wet hair and blue denim top, again stopping in front of me. Suddenly, I realized that the woman standing before me was dead, and I froze in my seat, not daring to move. I never saw her below the waist, just from the waist up. Then, the saddened woman again disappeared once again down the hall.

I was growing a bit concerned when I saw her the third morning, and I told my friend Joie, who occupied the cubicle beside mine. We checked to see if anyone had died in the building, but no one had. We then checked around the neighborhood and found that a young woman had been killed close by a few years earlier. Searching the web for a news article, we found nothing from the press; however, we did find a police report indicating that a young woman had been found along the Brandywine Creek, near our workplace.

The woman had been dismembered and placed inside a suitcase. Her legs were missing. They had a picture of her clothes, and I was shocked when I saw the lady’s blouse – blue denim with white stripes and copper-colored buttons. Her body was unclaimed and unidentified, and later I saw the story featured on America’s Most Wanted.

I tried to find out if there were any other sightings of this ghostly apparition, but I could not find any. In looking for other sightings, I ran across a lady named Leslie Rule who investigates these things. She said there was some unfinished business that was keeping the girl on earth. I had some Masses said for her, enrolled her for Perpetual Masses, and I named her Mary Angel. I have never seen her since!

Thanks, Katie, for a terrific story!! We were so intrigued by Katie’s letter that we just had to know more about Mary Angel. Katie helped us by providing additional information about this poor sad, now an unearthly woman.  Read about the Pennsylvania Suitcase Jane Doe, as she was dubbed. Perhaps, as they say, “You Can Help Solve the Mystery” and let this poor woman’s soul rest in peace. 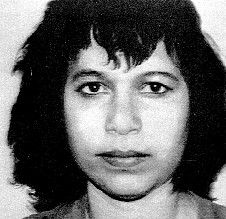 On July 11, 1995, a fisherman found the dismembered body of a woman described to have been between the ages of 25 and 30 stuffed in a suitcase in a remote area of Chester County, Pennsylvania, along the bank of the Brandywine Creek. Inside the maroon suitcase was a garment bag, which contained a trash bag sealed with plastic packing tape.  The trash bag contained the woman’s head and torso but did not contain her legs. An immediate alert went out in the area, and 20 to 30 troopers were assigned to search for the woman’s killer and her identity. But, no one claimed to have known her.

Forensic experts described her to have been between 4-foot-11 and 5-foot-4 and weighing between 125 and 140 pounds. Believing that she was most likely to have been of European/Caucasian or Hispanic descent, she had fair skin with short brown hair and brown eyes.

At the time of her death, she wore a light blue denim shirt with thin blue vertical stripes and copper-colored buttons.  Discovered within three to seven days of her death, her fingerprints did not yield a match, so she was never arrested in the United States.

A little more than six months later, in late January of 1996, a hiker found two leg bones and another green plastic trash bag containing clothing items in a remote area of Bucks County, a site roughly 50 miles away. Although mutilation and decomposition made it impossible to get a conclusive DNA match, other evidence convinced investigators that both sets of remains were those of the same woman – and that her legs had been amputated after death. This new development added new information for the investigators, but they could still find her identity or her killer. 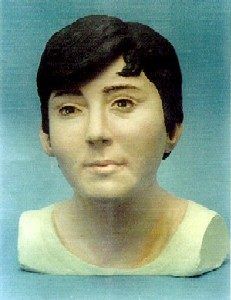 In 1997, police commissioned Frank Bender, a top forensic artist, to reconstruct a replica of the woman’s head from the facial bones found in the suitcase. The woman’s facial bust was broadcasted throughout the local and national media, but still to no avail.

Since the body was found in 1995, the details of the case have been shown on America’s Most Wanted through two broadcasts: one in June of 2001 and one in March of 2002, dubbing the case the “Pennsylvania Suitcase Jane Doe.” Over the years, there have been hundreds of tips – including the “vision” of a psychic on The Montel Williams Show

All these years later, despite an intensive and continuing investigation and publicity, her identity and her killer remain undiscovered.