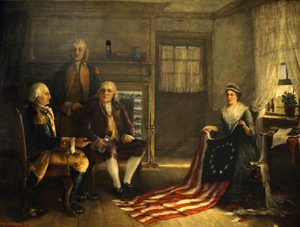 Birth of our Nation’s Flag by Charles Weisgerber, 1893

In 1870, decades after her death, the legend that became Betsy Ross began in Pennsylvania; the story of her sewing the first U.S. Flag stitched into American lore.

What we know about Betsy for a fact is that she was born January 1, 1752, the eighth of 17 children in the Quaker family of Samuel and Rebecca Griscom. The family moved from New Jersey to Philadelphia when Betsy was only three. As she grew older, the young Betsy developed skills as a trained upholsterer and apprenticed under John Webster, known for his work in Philadelphia.

While there, she fell into “forbidden” love with a fellow apprentice, John Ross. This did not sit well with Betsy’s family, as marrying outside the Quaker faith resulted in expulsion from the community. So, on November 4, 1773, as young lovers tend to do, they fled across the Delaware River to Gloucester to get married anyway. Both quickly found success, opening their own upholstery business in a part of Philly known as “Old City.”

Looming over them, though, was the beginning of the American Revolution. John was a local militia member, and while it’s disputed how, he was killed just a little over two years into their marriage in 1776. The young couple did not have any children. 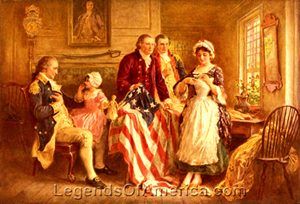 Here’s where the story turns to lore. As family descendants tell it, Ross was visited in June of 1776 by George Washington, Robert Morris, and her late husband’s Uncle, George Ross. Allegedly they asked her to make a flag for the new nation just a month before the Declaration of Independence. Presenting her with a draft design, Betsy is said to have suggested a five-pointed star instead of the six-pointed star presented to her, and the men, members of a secret committee from the Continental Congress, left her to her work to fashion the first flag of what would be a new nation.

According to family affidavits, Ross was acquainted with Washington through her church and had dealt with the future first President via her upholstery business. But the evidence for or against these claims and the claim of the meeting are elusive and left to the reader to decide.

In June of 1777, Betsy remarried Joseph Ashburn. Ashburn was a mariner often at sea, but they managed to start a family. In 1780, while pregnant with their second daughter, Joseph’s ship was captured by the British, and he was imprisoned in England. During this time, their first daughter, Zilla, died before her first birthday, and Joseph became ill and died in captivity.

Bringing the news of her husband’s death, a fellow prisoner now released and a close friend of Joseph, named John Claypoole, fell immediately in love with the widow and married her on May 8, 1783. The couple returned to the Quaker community, joining the Society of Free Quakers, which supported the break from British rule. Their marriage would last 34 years and result in five more daughters. Her husband, John, struggled with his war injuries for years and died of a lengthy illness in 1817.

In the meantime, Betsy had continued her upholstery business and did indeed make flags. She retired after half a century at age 76, leaving her home to live with her daughter Susanna near Abington. By 1833 Betsy was completely blind and spent her final years at her daughter Jane’s home back in Philly. She died on January 30, 1836, at the age of 84. 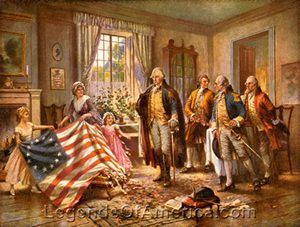 Years later, in 1870, her grandson William Canby presented a paper and affidavits from several family members to the Historical Society of Pennsylvania. In it, they related the story of her involvement with Washington and the flag, which appears to have originated with an Aunt 20 years after Betsy’s death. Canby used General Washington’s known journey to Philadelphia in the late Spring of 1776 as the date of the meeting. Eager for patriotic stories heading into the nation’s Centennial of 1876, the story was published in several national journals. In 1909, a book by Canby’s brother and nephew called “The Evolution of the Flag” further stitched the legend of Betsy Ross into American History.

Plenty still say the story is true, pointing to the fact that Betsy made flags during the time in question for the Pennsylvania Navy. Still, detractors say there is no evidence that a congressional flag committee ever existed. No records show Congress addressing the flag issue until the resolution to adopt the stars and stripes in June 1777.

Although facts, either way, don’t have solid proof, some historians argue that credit may be due to New Jersey Representative Francis Hopkins, a signer of the Declaration of Independence and known for his skills in designing symbols. Hopkins had a hand in creating the Great Seal of the United States, the Treasure Seal, American currency, and more.

The home of Betsy Ross, where the nation’s first flag is said to have been made, was made into a museum in 1898 and continues to stand as one more than 250 years after it was built. 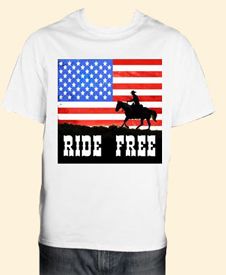 The Origin of Uncle Sam