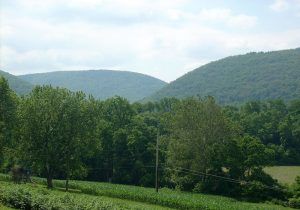 Fort Antes, Pennsylvania was located at the home of Colonel John Henry Antes, a member of the Pennsylvania Militia. Surrounded by a stockade, this fort was built in about 1777 on a plateau on the east side of Antes Creek, overlooking the West Branch Susquehanna River.

Colonel Antes was a man of prominence in the area, in civil as well as military life. He was a justice of the peace and twice a sheriff. He came to the area in about 1772 and the following year, he built a small home and a gristmill at the mouth of the Antes Creek. When Indian hostilities broke out, he was appointed the captain of a company of 58 militiamen in the Second Battalion under Colonel James Potter, for the defense of the frontier in January 1775. By May 1777, he commissioned a Lieutenant Colonel of the Fourth Battalion of the militia.

It cannot be positively stated when the stockade was built, but it must have been in the summer of 1777 when the Indians became especially troublesome on the frontier. The site selected for the fort was on the hill overlooking the mill, which was within rifle shot. It was constructed according to the usual plan, by sinking vertically heavy timbers in a trench dug four or five feet deep, when the earth was tilled in around them.

These stockades were from 10-12 feet high and notched at the top for musketry. It was thought to have enclosed about a quarter of an acre. A militia company was stationed there for several months. The garrison kept a vigilant outlook for the enemy and scouting parties were frequently sent out for the purpose of keeping communication open with Fort Muncy. The winter of 1777-78 was rendered distressing by the frequent inroads of the Indians, and the fort became a refuge for area settlers.

The attacks in the area continued as a major campaign by Loyalists and Native Americans allied with the British devastated the small communities on the northern and western branches of the Susquehanna River. June 10, 1778, has been called the “bloodiest day” in the history of Lycoming County, with three separate attacks on parties of settlers. In the early summer of 1778 news came of a group of Native American warriors, perhaps accompanied by Loyalist and British soldiers, heading for the West Branch Susquehanna River valley to destroy all the settlements there.

Short on men and ammunition, and unable to defend the small forts of the West Branch Susquehanna River Valley, Colonel Samuel Hunter, commanding Fort Augusta, ordered the region to be evacuated, in what became known as the “Big Runaway.” Colonel Hunter sent word to Colonel Hepburn, who was commanding Fort Muncy, to order all the troops above him on the river to abandon the country and retire below. However, Colonel Hepburn had some difficulty in getting a messenger to carry the order up to Colonel Antes, as the people in the area were panic-stricken due to recent Indian attacks.

At length, Robert Covenhoven, who had served under George Washington in the Continental Army, along with a young millwright in the employ of Andrew Culbertson, volunteered their services and started on the dangerous mission. They crossed the river and ascended Bald Eagle Mountain and kept along the summit until they came to the gap opposite Antes Fort. They then cautiously descended at the head of Nippenose Bottom and proceeded to the fort. It was in the evening and as they neared the fort, the report of a rifle rang out. A girl had gone outside to milk a cow, and an Indian lying in ambush fired upon her. The ball, fortunately, passed through her clothes and she escaped unhurt. The orders were passed on up to Fort Horn and preparations made for the flight. 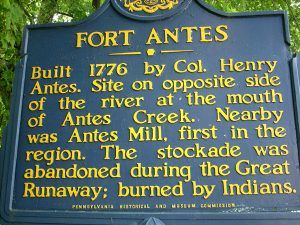 Most settlers had already gathered at the small forts and fortified houses for safety, but now the forts and the settlers’ homes and fields were abandoned, with livestock driven along and a few possessions floated on rafts on the river east to what is now Muncy, then further south to Fort Augusta in present-day Sunbury. Women and children rode on the rafts, while the men walked on the river bank to protect them and to drive along the livestock they had been able to save.

Most of the settlers relocated to Fort Augusta at the confluence of the North and West Branches of the Susquehanna River, while their abandoned houses and farms were all burnt. Less than a month after the evacuation, troops were sent back to Fort Muncy and scouting parties were sent out to see what damage had been done. They found the cabins and barns of the settlers burned and their crops greatly damaged. At Fort Antes, they found the mill and outbuildings burned and the embers yet smoking, showing that the Indians had just been there before them. The fort itself; however, was still standing, as the stout oaken timbers of the stockade did not burn easily. The only other building to survive was the Wallis House. The property losses were estimated at £40,000, and there were more deaths among the settlers. Colonel Samuel Hunter, the commander of Fort Augusta, was roundly criticized for ordering the evacuation. Many at the time felt that military assistance would have allowed the settlers to withstand the attackers. 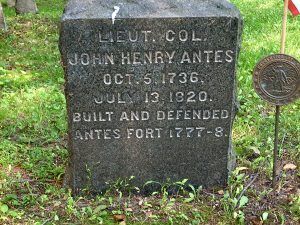 Colonel Henry Antes and his family fled with the rest of the fugitives in obedience to the orders of Colonel Hunter, but he was among the first to return to look after his property. Soon after the return of peace in the area, he rebuilt his mill and for years it was the only one in that section of the valley to supply the settlers with flour. His old stockade was allowed to fall into decay, and it soon became a ruin. In 1782, Colonel Antes was chosen sheriff of Northumberland County. He became governor of Pennsylvania in 1808 and served until 1817 – three terms. He also acquired considerable land on Antes Creek and made many improvements. He died May 18, 1820, at the age of 83.

He was buried in the graveyard near his famous fortification. Today, the site of the fort is in a cultivated field. A historic marker commemorates the site. It is located at Jersey Shore, Pennsylvania across the West Branch Susquehanna River from Nippenose Township.