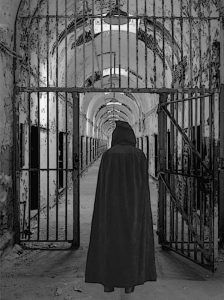 “Looking down these dreary passages, the dull repose and quiet that prevails is awful… Over the head and face of every prisoner who comes into this melancholy house, a black hood is drawn … the curtain dropped between him and the living world… He is a man buried alive; to be dug out in the slow round of years.”

Eastern State Penitentiary in Philadelphia, Pennsylvania is well known for several reasons. It was one of the most expensive prisons ever built in the world, it utilized a radical philosophy, it housed some of America’s most notorious criminals, and it is said to be the most haunted prison in the country.

The idea of a new type of prison system came about in 1787, just four years after the American Revolution was over when important men were gathered at the home of Benjamin Franklin to discuss prison reform. At that time, the Walnut Street Jail was located directly behind Independence Hall and the conditions there were terrible.

Men, women, and children who had committed all manner of crimes, from petty theft to murder, were jailed together on what amounted to little more than dirty pens, which were overcrowded, disease-ridden, cold, dangerous, and generally unsupervised. Abuse by both jailers and fellow inmates was common and food, heat, clothing or protection was only provided if the inmate could afford the price. Rape, robbery, and beatings were common practices and it wasn’t unusual for prisoners to die from cold or starvation. 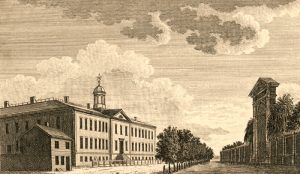 These abuses led to the formation of the Philadelphia Society for Alleviating the Miseries of Public Prisons, which met at Benjamin Franklin’s house to discuss improvements and alternatives. One member, a prominent Philadelphia physician and signer of the Declaration of Independence, named Benjamin Rush called for “a house of repentance” rather than prisons, which is where the name “penitentiary” came from. Rush proclaimed that radical change was needed and believed that crime was a “moral disease.” Further, he suggested that a “house of repentance” would be a place where prisoners could meditate on their crimes, experience spiritual remorse, and undergo rehabilitation. The plan was built around the idea of solitary confinement that would allow criminals to meditate on their crimes and involved no corporal punishment. The other men agreed and the method, which became known as the Pennsylvania System, would be utilized at Eastern State Penitentiary and other facilities throughout the world. 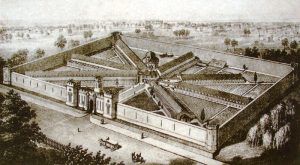 Eastern State Penitentiary by the Duval and Company

The men soon convinced the Commonwealth of Pennsylvania and started their work at the Walnut Street Jail. In 1790, a small “Penitentiary House” with 16 solitary cells was built. The inmates were segregated by sex and crime, vocational workshops were instituted to occupy the prisoners’ time, and much of the abusive behavior was abolished. But the facility was still overcrowded and as the population of the city increased, so did crime.

Though it would be decades before a new prison was built, ground was broken for the Eastern State Penitentiary in a cherry orchard outside the city in 1822. Designed by British-born architect John Haviland, the penitentiary would be unlike any seen before with seven single-level cell block wings radiating from a central surveillance hub, from which one guard could see down all of the cell blocks. Haviland was inspired by English prisons and asylums built beginning in the 1780s and gave it a neo-Gothic look. The building’s imposing facade was meant to be to be intimidating, although its battlements and windows were fake. Its interior was designed much like a church. 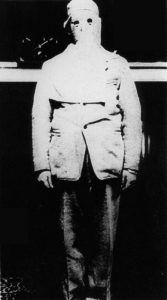 Though it was seven years before it would be completed, the penitentiary opened in 1829. With an initial capacity for 250 inmates, every prisoner would have his own 8 x 12-foot cell which featured central heating, a flush toilet, running water, a shower/bath, a skylight, and a private exercise yard.

From the minute the inmates entered the facility they were kept isolated. They were escorted into the prison with an eyeless hood placed over their heads. Afterward, the isolation continued so they could contemplate their crimes and read the Bible, which would lead to penitence and reformation.

To accomplish this goal, inmates could not mingle with other prisoners or continue relations with friends and family on the outside. When they were outside their cells, they were required to wear masks to hide their faces in their private exercise yards, which they were allowed to use one hour per day, with minimized interactions with the guards. During their time in their cells, they worked on prison projects such as shoemaking or weaving. Their only contact was with the warden, who was required to visit every inmate every day, and the overseers who were mandated to see each inmate three times a day. But even this communication was made through a small portal where meals and work materials were passed.

But just two years later, in 1831, it was already clear that the penitentiary would have to hold more criminals. Soon, second floors were added to all of the wings. This same year, the first female prisoner was confined in the penitentiary.

In 1832, the first inmate made his escape from the prison. For some reason, this inmate was not entirely confined to solitude and served as the warden’s waiter. He made his escape by lowering himself from the roof of the front building. He was later captured and returned but escaped in the same way in 1837. 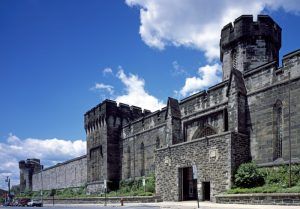 By the time the original plan was completed in 1836, the building was the largest and most expensive public structure ever erected in the United States at a cost of $780,000, which would equate to more than $18 million today. At that time, its cost was believed to have been second only to that of the U.S. Capitol.

The Pennsylvania System was opposed to by the Auburn System, also known as the New York System, which held that prisoners should be forced to work together in silence, and could be subjected to physical punishment. This system was favored in the United States. 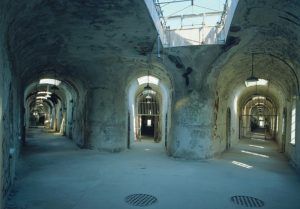 Eastern State Penitentiary Rotunda where guards could see down all the hallways.

Regardless of the cost and the disfavor by other systems, delegates from around the world came to study the radial floor plan and system of solitary confinement and it became the model for more than 300 prisons worldwide.

Some were not so convinced of the method. Charles Dickens, after a visit in 1842, wrote critically:

“I am persuaded that those who designed this system… do not know what it is they are doing… I hold the slow and daily tampering with the mysteries of the brain to be immeasurably worse than any torture of the body.”

By the 1870s, the prison needed more space and four new cell blocks were added in 1877 between the existing wings. Before long, the individual exercise yards were eliminated and inmates exercised together, but they were still required to wear masks and to be silent.