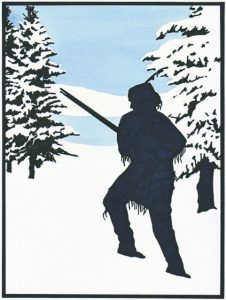 In 1733 Thomas Quick arrived near what is now Milford, Pennsylvania, and pitched a tent. His ancestral ties are somewhat vague—some sources state his homeland as County Ulster, some say Holland, and some even cover all the bases and claim both. Quick built a log cabin and began clearing the land for farming which didn’t seem to bother his neighbors, the Lenni Lenape. The following year, young Tom Quick was born, and here’s where the story picks up momentum. As the youngster grew, he spent more time with the Indians than his family, learning their language and how to hunt, fish, and trap, and the ways of the forest. He became nearly an Indian himself.

Young Tom grew up living a life that most boys would have found idyllic. But as the French and Indian War loomed, the climate throughout the Delaware Valley began to grow unsettled. Increasing numbers of settlers were encroaching on Indian lands. It didn’t take much prodding on the part of the French to induce the Indians to drive the whites from their lands. The story is told that young Tom was out with his father and brother-in-law one day on some errand across the river when the senior Quick was felled by a round from a marauding Indian’s rifle. Young Tom and the brother-in-law tried to drag the elder wounded Quick to safety, but he was dying and commanded them to run for their lives. The two men then frantically made their way back across the frozen river. Tom paused after reaching the bank to see if they were being pursued and saw to his horror his now-dead father being scalped.

Something snapped in him and from this point on, Tom Quick swore vengeance on all Indians. Though he could have joined the British Army as a regular or scout, he preferred to exact his revenge as a lone assassin. Over the years, fact blended with fiction and he became the legendary Tom Quick, Indian Slayer; The Red Revenger; The Avenger of the Delaware. Many stories were told such as the time he hunted with an Indian who agreed to keep the hides of their game while Tom would keep the meat. After a successful hunt in which seven deer were taken, Tom lingered behind the Indian carrying the hides and shot him in the back. He later told of his deed saying he had shot a buck with seven skins. It was claimed he murdered an Indian family canoeing on the Delaware River. When asked why he killed even the children he replied, “nits make lice.”

After the war was over and the hatchet was considered buried, Quick continued his independent rampage. Since there were still deep scars left mentally and physically on the settlers, there didn’t seem to be an overwhelming desire to bring him to justice. To many, he was a hero, but in today’s world his tendencies
would more likely be diagnosed as that of a psychopath.

On his deathbed, he claimed the personal achievement of having killed 99 Indians. The tale is told that he begged to have an old Indian who lived nearby to be brought to him for killing, so he could claim an even one hundred victims.

Needless to say, the Indian community hated and feared Tom Quick. An even more far-fetched story persists that when he did finally pass away, he was infected with Smallpox. Supposedly, after his burial Indians dug up his corpse, cut it into pieces, and distributed them as souvenirs. The recipients then contracted the disease, thus Tom Quick took more victims even after his death.

In 1889, the town of Milford erected the “Settlers Monument” and transferred Tom Quick’s remains there from his resting place in the nearby town of Matamoras. Legend or not, people eventually came to question whether someone of Quick’s reputation should be immortalized. Then in 1997, someone took a sledgehammer to the monument, causing extensive damage. It was repaired, but not replaced. Much controversy has ensued, but in the meantime, a plaque has been installed on top of the grave in the middle of Sarah Street which reads:

“This is a gravesite and should be respected as such. This monument and its inscriptions reflect a dialog and mindset of the era in which it was first erected, circa 1889, which was 94 years after the death of Tom Quick.

Many stories have been written about Tom Quick, but there is not enough documented evidence to separate truth from fiction. However, research into his life continues to be encouraged by the Pike County Historical Society.

This gravesite is under the care of the Milford Borough Council, with the approbation of members of the Cree Nation, long recognized as peacemakers.” 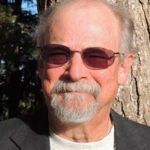 Always considering lettering as a form of illustration, it was a logical transition to explore the field, which resulted in designing and illustrating over one hundred books for Townsend Press, a nationally recognized publisher of academic material and classic literature. His work has also been displayed at the prestigious Philadelphia Sketch Club, the oldest artist’s club in the Western Hemisphere.

Incorporating a love of history, his latest projects are writing and illustrating two more books about the colorful and fascinating people, places, and past of the Delaware Valley. 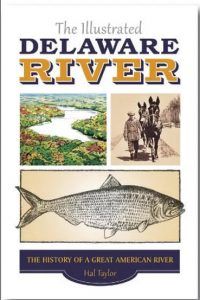 The Illustrated Delaware River – The History of A Great American River, by Hal Taylor

Hal Taylor has been a graphic artist for over 30 years, spending much of the last four researching, writing, and creating artwork for his first book, “The Illustrated Delaware River: The History of a Great American River.” It’s a lovingly told travelogue that traces the entire length of the Delaware through 400 plus years of history, filled with 140 original illustrations.

Hal began his career as a typographer, which led to original hand lettering and logo designs. He soon gained enough experience to begin teaching graphic design at Drexel University in Philadelphia.

He has created a library of over seven different original type designs that are available at a variety of online sources including fonts.com and myfonts.com.