An internationally known National Historic Landmark, Serpent Mound is a 1,348-foot-long, three-foot-high prehistoric effigy mound on a plateau along Brush Creek in Adams County, Ohio. Representing a snake with a curled tail, it is the largest serpent effigy in the world. Nearby are three burial mounds.

The Serpent Mound was first mapped by Euro-Americans as early as 1815 and documented from surveys by Ephraim Squire and Edwin Davis in their historic volume Ancient Monuments of the Mississippi Valley, published in 1848 by the newly founded Smithsonian Museum.

Researchers have attributed the construction of the mound to two different prehistoric indigenous cultures. The mound was initially thought to be of the Adena culture (800 BC to 100 AD), a Pre-Columbian Native American society that existed in a time known as the Early Woodland period. These were probably comprised of several related Native American groups who shared burial and ceremonial systems. The Adena lived in parts of present-day Ohio, Indiana, Wisconsin, West Virginia, Kentucky, New York, Pennsylvania, and Maryland.

Later, a 1996 carbon dating study led scholars to believe the mound was built by members of the Fort Ancient culture around 1070 AD. These people predominantly inhabited land along the Ohio River in modern-day southern Ohio, northern Kentucky, southeastern Indiana, and western West Virginia. They were a maize-based agricultural society that lived in sedentary villages and built ceremonial platform mounds.

However, most recent dating places the mound at around 300 BC, once again suggesting Adena construction. Though the massive earthwork has been excavated, no artifacts have been found that might allow archaeologists to assign it to a particular culture. More work is needed to clarify the age of Serpent Mound.

Effigy mounds, earthworks in the shape of animals and birds, were raised in North America in areas that now correspond to parts of Wisconsin, Minnesota, Illinois, Iowa, and Ohio. The profile images, seldom more than six feet high, include felines, bears, and deer. During the 19th century, many suffered considerably with the increase in farming settlements, as they were often plowed under. Fortunately, the extraordinary size and recognizable depictions saved many of the effigy mounds from such a fate.

The exact function of the great mound is uncertain, though it was most certainly of a ceremonial nature. While burials have been discovered in the effigy mounds further to the northwest, none have been found in the Ohio mound. 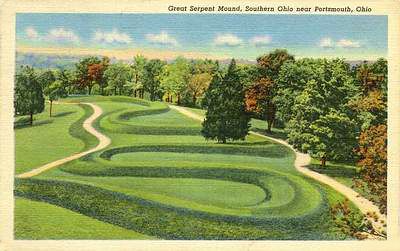 Aspects of the serpent mound and its location suggest it may have had associations with astronomy. The serpent’s head aligns with the summer solstice sunset, and the tail points to the winter solstice sunrise. Perhaps the mound was utilized as a calendar, indicating when it was time to plant or harvest. It has also been suggested that the curves in the snake’s body parallel lunar phases or align with the two solstices and two equinoxes.

Serpent Mound Memorial is located at 3850 State Route 73, about five miles northwest of Locust Grove. A pathway allows visitors to walk about the mound, and a museum features exhibits that include interpretations of the effigy’s form, description of the processes of constructing the mound, the geographical history of the area, and an exhibit on the Adena culture, historically credited as the creators of the mound.