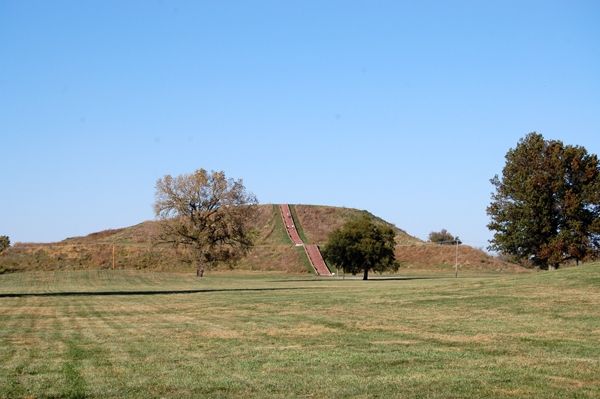 Preserving the remains of an ancient Native American city near Collinsville, Illinois, the Cahokia Mounds State Historic Site is across the Mississippi River from St. Louis, Missouri. Covering more than 2,000 acres, Cahokia is the most sophisticated prehistoric native civilization north of Mexico.

Best known for large, man-made earthen structures, the city of Cahokia was inhabited from about A.D. 700 to 1400. Built by ancient peoples known as the Mound Builders, Cahokia’s original population was thought to have been only about 1,000 until about the 11th century when it expanded to tens of thousands.

Houses were arranged in rows around open plazas. Agricultural fields and a number of smaller villages surrounded and supplied the city. The Cahokians were known to have traded with other tribes as far away as Minnesota. The original name of the city is unknown and the inhabitants apparently never utilized writing skills. The name Cahokia is that of an unrelated tribe that was living in the area when the first French explorers arrived in the late 17th century.

These ancient Indians built more than 120 earthen mounds in the city, 109 of which have been recorded and 68 of which are preserved within the site. Many others are thought to have been altered or destroyed by farming and construction. While some are no more than a gentle rise on the land, others reach 100 feet into the sky. Made entirely of earth, these ancient people transported the soil on their backs in baskets to the construction sites, most of which show evidence of several construction stages. More than 50 million cubic feet of earth was moved for the construction of the mounds, leaving large depressions called borrow pits, which can still be seen in the area.

Three types of mounds were constructed, the most common of which wash a platform mound, thought to have been used as monumental structures for political or religious ceremonies and may have once been topped by large buildings. Conical and ridge-top mounds were also constructed for use as burial locations or marking important locations.

At the center of the historical site is the largest earthwork called Monks Mound. At one hundred feet, it is the largest prehistoric earthen mound in North America. The mound is 1,000 feet long, 800 feet wide and comprised of four terraces, each one probably added at different times. An estimated 22 million cubic feet of earth was used to build the mound between the years of 900 and 1,200 A.D. The mound was named for French monks who lived nearby in the early 1,800’s as was most likely the site where the principal ruler lived, conducted ceremonies and governed the city. Over the years, the mound has significantly eroded or been damaged by man, so that the original size is now uncertain. 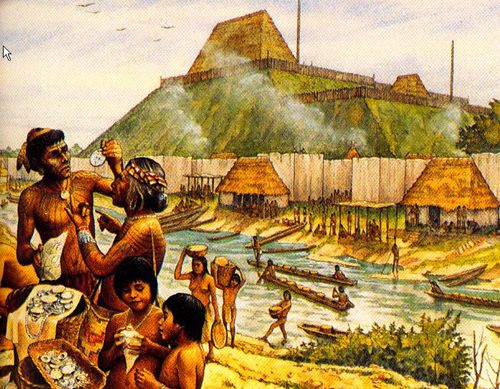 Surrounding Monks Mound and the center of the city was a 2-mile-long stockade with guard towers placed every 70 feet. Thought to have been constructed four different times, each building took nearly 20,000 logs. In addition to defense purposes, the wall acted as a social barrier, separating the elite from the common people. Today, several sections of the stockade have been reconstructed.

Archaeologists have also excavated four, and possibly five, circular sun calendars referred to as Woodhenge. These evenly spaced log posts were utilized to determine the changing seasons, displaying an impressive example of scientific and engineering practices.

One of the most interesting discoveries made during excavations was that of a small ridgetop mound referred to as Mound 72. Here, archeologists found the bodies of nearly 300 people, mostly young women believed to have been sacrificial victims. Nearby was another grave, that of what appears to have been a male ruler about 45 years of age. Laid upon a bed of 20,000 marine shell disc beads, archeologists believe that many of the other bodies buried near him are the remains of those who were sacrificed to serve him in the next life.

During the excavation, four other skeletons were also uncovered that continue to remain a mystery. These four men’s heads and hands were missing from their graves and no one knows why they were mutilated before their burials. The burial site is estimated to have been originally dug around 950-1000 A.D.

A gradual decline in the Cahokian population is thought to have begun sometime after 1200 A.D. and two centuries later, the entire site had been abandoned. Though their fate remains unknown, theories include climate changes, war, disease, and drought. Archeologists continue to be puzzled by the fact that there are no legends, records, nor mention of the once grand city in the lore of other local tribes, including the Osage, Omaha, Ponca, and Quapaw. This strange silence has led some experts to theorize that something particularly dreadful happened at the site, for which the other tribes wished to forget.

Many people still consider the Cahokia site to be a sacred place and Native Americans and metaphysical groups believe Cahokia is a source of powerful psychic energy.

The Cahokia Mounds State Historic Site was designated a National Historic Landmark in 1964 and as a World Heritage Site in 1982. The site features a variety of special events, craft classes, lecture series, tours, and other programs year-round. Cahokia Mounds is located just outside of Collinsville, Illinois, a short distance off Interstates 55/70 and 255, along Route 40. The highway runs through the center of the area separating Monk’s Mound from the Interpretive Center. 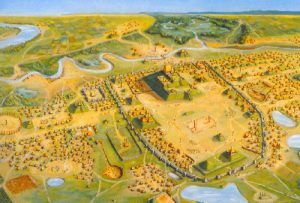