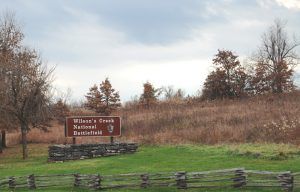 Brigadier General Nathaniel Lyon and Major General Samuel D. Sturgis led the Union Army in the battle. While the Lyon’s Army of the West was camped at Springfield, Missouri, Confederate troops were approaching. On August 9, both sides formulated plans to attack the other. About 5:00 am on the 10th, Lyon, in two columns commanded by himself and Colonel Franz Sigel, attacked the Confederates on Wilson’s Creek about 12 miles southwest of Springfield. The Rebel cavalry received the first blow and fell back away from Bloody Hill. However, additional Confederate forces soon rushed in and stabilized their positions. Then they attacked the Union forces three times that day but failed to break through the Union line. When General Nathaniel Lyon was killed in the battle, Sturgis replaced him.

After the third Rebel attack, the southern forces withdrew. Sturgis, in the meantime, realizing his men were exhausted and his ammunition low, ordered a retreat to Springfield. The Confederates were in a similar position and did not pursue them. However, the battle had been a victory for the Rebels. Estimated casualties totaled 1,235 Union and 1,095 Confederate. The most significant Missouri battle of 1861, Wilson’s Creek gave the Confederates control of southwestern Missouri. This Confederate victory buoyed southern sympathizers in Missouri and served as a springboard for a bold thrust north that carried Price and his Missouri State Guard as far as Lexington. In late October, Governor Claiborne Fox Jackson pulled together his political forces, met in Neosho and passed an ordinance of secession.

Dry Wood Creek – September 2, 1861 – Also called the Battle of Big Dry Wood Creek and Battle of the Mules, this skirmish between the Kansas Cavalry Brigade and the Missouri State Guard took place in Vernon County. It began when General James H. Lane’s Kansas Brigade of about 600 troops set out from Fort Scott, Kansas to learn the whereabouts of a rumored Confederate force. They soon surprised a Confederate force of about 6,000-strong, near Big Dry Wood Creek. The stronger Confederate force, commanded by Major General Sterling Price and Brigadier General James S. Rains soon drove the cavalry to retreat and captured their mules in the meantime. The Rebels then continued on towards Lexington, forcing the Federals to abandon southwestern Missouri and to concentrate on holding the Missouri Valley. The skirmish resulted in about 14 Federal casualties. The number of Confederate casualties is unknown. 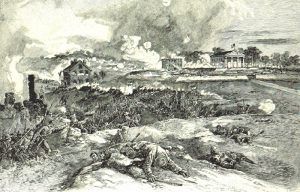 Lexington – September 13-20, 1861 – Taking place in Lafayette County, this battle is also referred to as the Battle of the Hemp Bales. A major Confederate victory, the rebels were commanded by Major General Sterling Price, leading some 12,000 troops of the Missouri State Guard. After their success at Wilson’s Creek, the Guard consolidated forces in the northern and central part of the state and marched on Lexington. There, Colonel James A. Mulligan commanded an entrenched Union garrison of about 3,500 men. Price’s men first encountered Union skirmishers on September 13th south of town and pushed them back into the fortifications. The Major General,  having bottled the Union troops in Lexington, then decided to await his ammunition wagons, other supplies, and reinforcements before assaulting the fortifications. By the 18th, Price was ready and ordered an assault. The Missouri State Guard moved forward amidst heavy Union artillery fire and pushed the enemy back into their inner works. On the 19th, the Rebels consolidated their positions, kept the Union forces under heavy artillery fire and prepared for the final attack. Early on the morning of the 20th, Price’s men advanced behind mobile breastworks, made of hemp, close enough to take the Union works at the Anderson House in a final rush. Mulligan then requested surrender terms afternoon, and by 2:00 pm the Federal men had vacated their works and stacked their arms. This Unionist stronghold had fallen, further bolstering southern sentiment and consolidating Confederate control in the Missouri Valley west of Arrow Rock. In the end, the battle resulted in estimated Union casualties of 1,874 compared to just 100 Confederate.

Liberty – September 17, 1861 – Taking place in Clay County, this battle is also referred to as Blue Mills Landing or Blue Mills. On September 15, 1861, Confederate General D.R. Atchison left Lexington and marched towards Liberty, where he met up with the Missouri State Guard. The next night, his forces crossed the Missouri River to the south side and prepared for a fight with Union troops reported to be in the area. At the same time, Union Lieutenant Colonel John Scott was leading a force of about 600 men from Cameron, Missouri towards Liberty, on the 15th. Camping at Centreville, he and his men departed at about 2:00 a.m. on the 17th. When Scott arrived in Liberty, he sent out scouts to find the enemy, and, about 11:00 a.m., skirmishing began. At noon, Scott marched in the direction of the firing, approached Blue Mills Landing and, at 3:00 a.m., struck the Confederate pickets. However, the Union force began to fall back and the Rebels pursued for some distance. The fight lasted for an hour. Estimated casualties in the battle were 56 Union and 70 Confederate. Fredericktown – October 21, 1861 -This Union victory, led by Colonels J.B. Plummer and William P. Carlin took place in Madison County. The two colonels leading separate columns of troops advanced on Fredericktown to overtake Confederate Brigadier General M. Jeff Thompson and his men. On the morning of October 21, Thompson’s force left Fredericktown headed south. About twelve miles out, Thompson left his supply train in a secure position and returned toward Fredericktown. He then learned that Union forces had occupied Fredericktown, so Thompson spent the morning attempting to discern the enemy numbers and disposition. Unable to do so, he attacked anyway, around noon. Plummer, with his force and a detachment of Col. William P. Carlin’s troops, met the Rebel forces outside town and a two-hour fight ensued. Overwhelming Union forces took their toll, and Thompson’s men retreated. Union cavalry pursued. Fredericktown cemented Union control of southeastern Missouri. The total losses for the Union are unknown, while the Rebel casualties were an estimated 62. 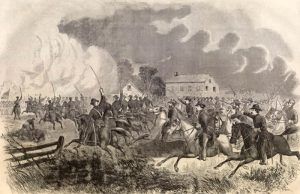 Springfield – October 25, 1861 – Also referred to as Zagonyi’s Charge, this battle took place in Greene County.  Having accomplished little since taking command of the Western Department, with headquarters in St. Louis, Missouri, Major General  John C. Fremont formulated a plan to clear Major General Sterling Price’s Rebels from the state and then, if possible, carry the war into Arkansas and Louisiana. Leaving St. Louis on October 7, 1861, Fremont’s combined force eventually numbered more than 20,000. His accompanying cavalry force, numbering 5,000 men and other mounted troops, included Maor. Frank J. White’s Prairie Scouts and Fremont’s Body Guards under Major Charles Zagonyi. Major White became ill and turned his command over to Zagonyi. These two units operated in front of Fremont’s army to gather intelligence. As Fremont neared Springfield, the local state guard commander, Colonel Julian Frazier, sent out requests to nearby localities for additional troops. Fremont camped on the Pomme de Terre River, about 50 miles from Springfield. Zagonyi’s column, though, continued on to Springfield, and Frazier’s force of 1,000 to 1,500 prepared to meet it. Frazier set up an ambush along the road that Zagonyi traveled, but the Union force charged the Rebels, sending them fleeing. Zagonyi’s men continued into town, hailed Federal sympathizers and released Union prisoners. Leery of a Confederate counterattack, Zagonyi departed Springfield before night, but Fremont’s army returned, in force, a few days later and set up camp in the town. In mid-November, after Fremont was sacked and replaced by Maj. Gen. Hunter, the Federals evacuated Springfield and withdrew to Sedalia and Rolla. Federal troops reoccupied Springfield in early 1862 and it was a Union stronghold from then on. This engagement at Springfield was the only Union victory in southwestern Missouri in 1861. Estimated casualties were 85 Union and 133 Confederate.