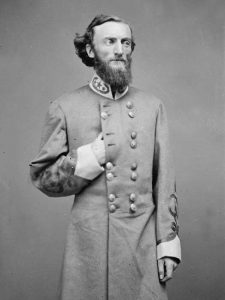 In 1863, Confederate General John S. Marmaduke engaged in two raids into Missouri during the Civil War. While both were turned back, they kept loyal Missourians in a constant state of fear and encouraged Confederate guerillas operating in Missouri.

In early December 1862, the Union Army of the Frontier, led by General James Blunt, advanced into Arkansas. In an attempt to stop the Union Army, Confederate General Thomas Hindman ordered his cavalry division, led by General Marmaduke, to make attacks in Missouri at the “rear and flank” of the Union army. He hoped that this would disrupt their supply line and force them to retreat. He also ordered Marmaduke to avoid a “general engagement.”

Marmaduke acted quickly, and after crossing into Missouri, he received word that Springfield was lightly defended. Disregarding his orders not to incite any major engagements, Marmaduke seized the opportunity to force the Union to retreat out of Arkansas and force them to stay out until new defenses could be constructed at Springfield. 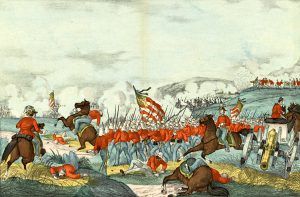 Springfield was an important Federal communications center and supply depot, so the Rebels wished to destroy it. The Union army had constructed fortifications to defend the town. Their ranks, however, were depleted because Francis J. Herron’s two divisions had not yet returned from their victory at Prairie Grove, Arkansas, on December 7, 1862.

After receiving a report on January 7 of the Rebels’ approach, Brigadier General Egbert B. Brown set about preparing for the attack and rounding up additional troops. Around 10:00 am, the Confederates advanced to the battle line to attack. The day included desperate fighting with attacks and counterattacks until after dark, but the Federal troops held, and the Rebels withdrew during the night. Brown had been wounded during the day. The Confederates appeared in force the next morning but retired without attacking. The Federal depot was successfully defended, and Union strength in the area continued. The Union victory resulted in estimated casualties of 163 Union and 240 Confederate. 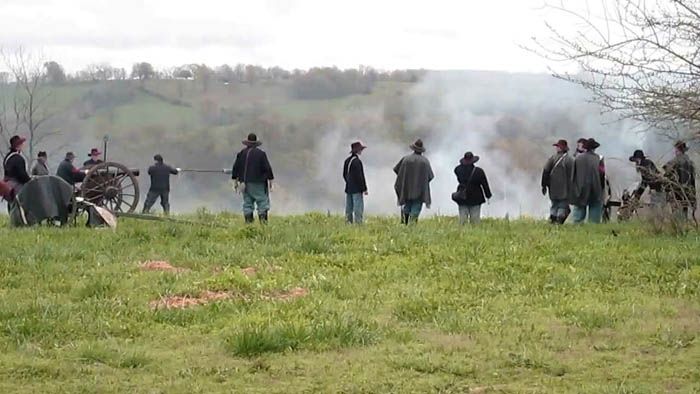 Reenactment of the Battle of Hartville, Missouri

Hartville – January 9-11, 1863 – Occurring in Wright County as part of Marmaduke’s First Expedition into Missouri Campaign, this battle was waged on January 9-11, 1863. John S. Marmaduke led a Confederate raid into Missouri in early January 1863. This movement was two-pronged. Colonel Joseph C. Porter led one column, comprising his Missouri Cavalry Brigade, out of Pocahontas, Arkansas, to assault Union posts around Hartville, Missouri. When he neared Hartville on January 9, he sent a detachment forward to reconnoiter. It succeeded in capturing the small garrison and occupying the town. The same day, Porter moved on toward Marshfield.

On January 10th, some of Porter’s men raided other Union installations in the area before catching up with Marmaduke’s column east of Marshfield. Marmaduke had received reports of Union troops approaching to surround him and prepared for a confrontation. Colonel Samuel Merrill, commander of the approaching Union column, arrived in Hartville, discovered that the garrison had already surrendered, and set out after the Confederates. A few minutes later, fighting began. Marmaduke feared being cut off from his retreat route back to Arkansas, so he pushed Merrill’s force back to Hartville, establishing a defense line. Here, a four-hour battle ensued in which the Confederates suffered many casualties but compelled the Yankees to retreat. Although they won the battle, the Confederates were forced to abandon the raid and return to friendly territory. The Confederate victory resulted in 78 Union casualties and 329 Confederate.

After the Confederate troops returned to Arkansas, Marmaduke immediately began to plan for a second raid into Missouri. His objectives were:
to draw Union troops away from Fayetteville to reduce pressure on the Confederate troops; to stop the possibility of Union troops being sent to support General Ulysses Grant at Vicksburg, Mississippi or General William Rosecrans in Tennessee get more supplies and recruits.

General Marmaduke’s second raid into Missouri began on April 18, 1863, at which time he split his army of 5,000 troops into two columns led by Colonels George Carter and Joseph Shelby. He planned to trap Union General John McNeil’s force at Bloomfield, Missouri, between the two confederate columns.

While Colonel Carter’s column marched toward Bloomfield, General Marmaduke and Colonel Shelby went to Fredericktown to intercept General McNeil if he attempted to retreat to Pilot Knob. However, McNeil received word of Marmaduke’s movements and retreated to Cape Girardeau. 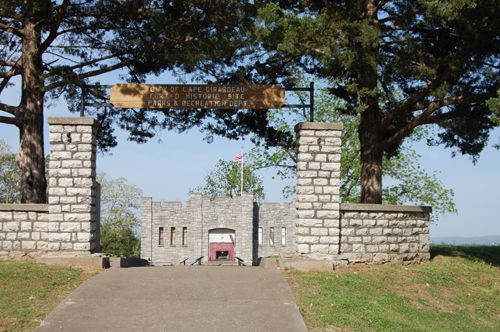 After McNeil found out about the plan of the Confederates to attack his troops near Bloomfield, he moved to the better-fortified post at Cape Girardeau. Though Confederate Colonel George Carter had been instructed not to pursue McNeil unless he retreated to Pilot Knob, Carter followed anyway and was soon joined by General Marmaduke.

At Cape Girardeau, an engagement erupted, involving four to five hours of artillery bombardment before the Confederates retreated to Jackson, Missouri, and then back to Arkansas. The Union victory resulted in 12 Union casualties and 325 Confederate casualties. 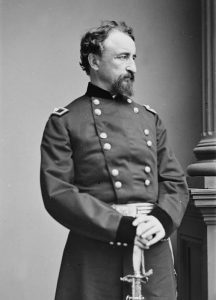 Union General McNeil, with reinforcements, then pursued the fleeing enemy, engaging in minor skirmishes until they reached the border. Once there, Marmaduke was able to turn the Union forces back.

Afterward, controversy followed. In September 1863, Confederate General John Marmaduke accused his immediate superior officer, Brigadier-General Lucius M. Walker, of cowardice in action for not being present with his men on the battlefield. Walker, who was insulted, then challenged Marmaduke to a duel, which resulted in Walker’s death on September 6, 1863.