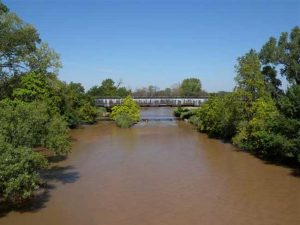 The Medicine Lodge River, a tributary of the Salt Fork of the Arkansas River, is 130 miles long and rises in the southern part of Kiowa County in southwest Kansas.  It then flows generally southeastwardly through Barber County, Kansas, into Alfalfa County, Oklahoma, where it joins the Salt Fork of the Arkansas River about five miles northeast of Cherokee. The name is of Indian origin and has also been called in the past the “A-ya-dalda-pa River,” “Medicine Lodge Creek,” and “Medicine River.”

It got its name from a large hut built by the Kiowa Indians, who believed the water from the river had healing properties if ingested or inhaled in a sauna-type room. At its confluence with Elm Creek in Barber County, the Medicine Lodge Peace Treaty was signed by the U.S. Government and major Western Native American tribes in October 1867.