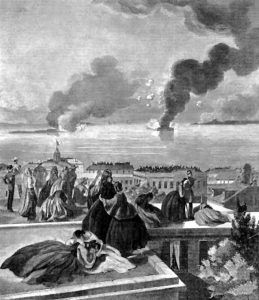 Fort Sumter, South Carolina is bombed by the Confederates while the people of Charleston look on.

The coming of the Civil War was not unanticipated because the sectional conflict had been at the center of American politics for several decades before the firing on Fort Sumter, South Carolina in April 1861. Yet war was a rude awakening for most Americans who had not realized that Abraham Lincoln’s election in 1860 and secession fever would culminate in an armed struggle for Confederate independence. Few imagined that this conflict would escalate into a full-scale bid to destroy slavery and result in waves of African Americans struggling openly for full and equal rights as citizens, many through the dangerous rite of passage as Union soldiers. Hardly anyone imagined that the conflict would result in the kind of total war which would absorb the entire nation for over four years and deprive the country and families of half a million young men.

This conflict became all-encompassing, touching the lives of nearly all Americans — slave and free, black and white, native-born and immigrant, property owner and wage earner, man and woman, adult and child — dramatically transformed by this momentous battle to decide the future of the country. Like many armed engagements, even its name reflected dispute. Lincoln and his government wished to minimize secession, hoping to ignore the sovereignty of the Confederacy. But certainly the “War for the Union,” or the “Civil War” was the most popular Yankee appellation. Ardent Confederates had other names: the “Second American Revolution, “the “War of Northern Aggression,” the “War for Southern Independence,” the “War for States’ Rights.” Most Americans, horrified by the way the nation was ripped apart, viewed it as “the Brother’s War.” Indeed, the conflict deeply divided hundreds of households and thousands of kinship networks when volunteers were needed. 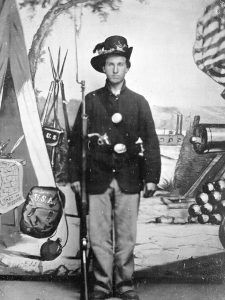 Symbolic of this division was that four of Lincoln’s brothers-in-law wore Confederate uniforms. Despite Mary Todd Lincoln’s staunch devotion to the Union, her southern relations were loyal to the Confederacy. Other prominent politicians found themselves in complex straits: Senator George B. Crittenden of Kentucky had two sons fighting in the war — one a major general for the Confederacy and the other a major general of the Union. Major Robert Anderson, in charge of federal troops at Fort Sumter, was the son-in-law of the governor of Georgia. Across the bay, he faced his artillery instructor at West Point, Confederate General P. G. T. Beauregard, who fired on his star pupil and former assistant. Many West Point graduates, friends and roommates, faced one another on the battlefield as well as serving alongside military school comrades. Friendship and kinship were rent asunder by the great onslaught of the Civil War.

Childhood was dramatically affected by the onset of war. The overwhelming youth of the armies on both sides and the way young men flocked to battle had a generational impact on America. Out of 2,700,000 federal soldiers, over two million were 21 or younger and over a million younger than 18. Rough estimates are that 100,000 served in the Union army at 15 or younger with 300 under 13 and 25 under the age of 10. Most of these extremely youthful volunteers were in the drum and fife corps, but their separation from families and exposure to deprivation and danger could be traumatizing. 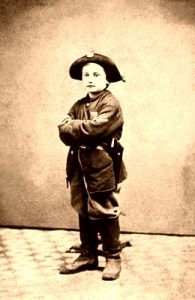 Boy Soldier in the Civil War

In a sampling of a million federal enlistments, only 46,000 soldiers were over 25. Youthful officers became a hallmark of the Union army — with Galusha Pennpacker rising to the rank of brevet major general at 17, too young to vote until the war ended. George Custer rose to this exalted rank at the age of 21 and joined six other Union generals in their twenties.

Confederates had equally legendary youths in military service. Brigadier General William P. Roberts of North Carolina rose to his rank at the age of 20. Boys in gray were equally common, and Confederate troops had disproportionate numbers of teenagers as well, but samplings of rebel ranks indicate that there were larger numbers of men in their twenties and thirties and a larger group of older soldiers, especially as the war wore on. In any case, families were stripped of manpower and communities literally depleted by the war. One town in Wisconsin witnessed 111 of the 250 registered voters volunteering for the army. The farm boys of the midwestern states entered the Union ranks in droves.

But no group was more electrified by the 1860 election than free blacks. Thomas Hamilton, founder of the New York weekly newspaper, the Anglo-African, had warned in March 1860: “We have no hope from either [of the] political parties. We must rely on ourselves, the righteousness of our cause, and the advance of just sentiments among the great masses of the . . . people.” But the majority of African Americans supported Lincoln. The Colored Republican Club of Brooklyn raised a “Lincoln Liberty Tree” in the summer of 1860, and similar signs of African American solidarity dotted the northeastern seaboard and Old Northwest riversides. Most eligible black voters cast their ballots for Lincoln.

Frederick Douglass crowed over Lincoln’s victory: “For fifty years the country has taken the law from the lips of an exacting, haughty and imperious slave oligarchy . . . . Lincoln’s election has vitiated their authority, and broken their power.” The threat of disunion buoyed black activists during postelection chaos. In the North, they rallied to the cry, “BREAK EVERY YOKE.” Blacks saw the split in the Union as a sign that the North could no longer tolerate slaveholders’ tyranny.

White Southerners chose to interpret Lincoln’s election and the response to secession in equally strong terms. Further, slaveholders feared the undermining of their authority, which armed federal intervention represented. The slave grapevine rattled with the threat of war. In the Deep South, conspiracies and plots spontaneously combusted in the war’s first few weeks. On May 14, 1861, a planter in Jefferson County, Mississippi, wrote to the governor concerning his fears: “A plot has been discovered and already three Negroes have gone the way of all flesh or rather paid the penalty by the forfeiture of their lives.” He argued that 11,000 slaves surrounding less than a thousand whites might instigate devastating insurrection. The plotters’ “diabolical” plans included killing white males, capturing white females, and marching “up the river to meet ‘Mr. Linkin’ bearing off booty such things as they could carry.” Planter paranoia prevailed in the Delta countryside.

By the end of the long hot summer of 1861, a plot was uncovered in Adams County, Mississippi when a woman reported “that a miserable, sneaking abolitionist has been at the bottom of this whole affair. I hope that he will be caught and burned alive.” Alarm ran rampant in the rural interior, where husbands and sons had been lured off to the Confederate army and blacks routinely outnumbered whites 20 to one. Local investigators determined that this homegrown conspiracy was the work of slaves, planning to rise up against masters in the event of federal invasion. By mid-September, Home Guards and Vigilance Committees in Adams County were on the offensive and nearby counties on alert. Reportedly 27 black men were hanged. A woman writing from her plantation confided, “It is kept very still, not to be in the papers.”