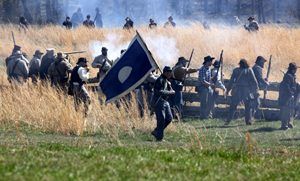 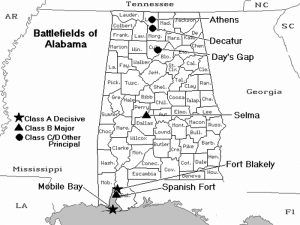 The birthplace of the Confederacy, the State of Alabama was central to the Civil War. For years tensions had been building before Abraham Lincoln was elected as president in November 1860. Afterward, many politically powerful Alabamians viewed the election as an opening wedge that threatened to destroy slavery and across the state, came cries for state rights.

Governor A. B. Moore took several decisive steps to safeguard the state’s financial status and defensive capabilities. He ordered the state militia to seize the arsenal at Mt. Vernon and Forts Morgan and Gaines on Mobile Bay, and he contributed more than 500 troops to assist Florida Governor Madison S. Perry in capturing the Federal forts at Pensacola. He then called for a constitutional convention and on January 11, 1861, Alabama passed an Ordinance of Secession, declaring Alabama a “Sovereign and Independent State.” From January through March, Alabama invited other states to form a Southern Republic and develop constitutions to legally run their own affairs. On February 4, 1861, delegates from six states that had recently seceded from the Union meet in Montgomery, Alabama to establish the Confederate States of America. Four days later this provisional Confederate Congress, comprising representatives of Alabama, Florida, Georgia, Louisiana, Mississippi, and South Carolina, organized the Confederacy with the adoption of a provisional constitution. On February 22nd, Jefferson Davis was inaugurated as president of the Confederate States of America in Montgomery, Alabama which served as the Confederate capitol until it was moved to Richmond, Virginia in May. 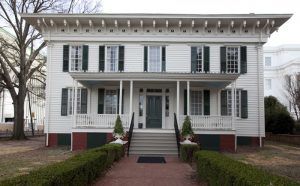 The White House of the Confederacy, Montgomery, Alabama by Carol Highsmith.

During the war, Alabama provided numerous troops and leaders, military material, supplies, food, horses and mules to their cause. The state was not the scene of any significant military operations, yet it contributed about 120,000 men to the Confederate service, practically all the white population capable of bearing arms. Most were recruited locally and served with men they knew, which built morale and strengthened ties to home. Medical conditions were severe; about 15% died of disease, and 10% from battle. Alabama had few well-equipped hospitals, but it had many women who volunteered to nurse the sick and wounded. Soldiers were poorly equipped, especially after 1863, and often resorted to pillaging the dead for boots, belts, canteens, blankets, hats, shirts and pants.

Uncounted thousands of slaves worked with Confederate troops; they took care of horses and equipment, cooked and did laundry, hauled supplies, and helped in field hospitals. Other slaves built defensive installations, especially those around Mobile. They graded roads, repaired railroads, drove supply wagons, and labored in iron mines, iron foundries and even in the munitions factories. As they were enslaved, the labor of slaves was involuntary, their unpaid labor was forcibly impressed by their unpaid masters. About 10,000 slaves escaped and joined the Union Army, along with 2,700 white men who had remained loyal to the Union.

In 1863 Federal forces secured a foothold in northern Alabama in spite of spirited opposition from Confederate cavalry under General Nathan B. Forrest. At the southern coast, the Alabama ports remained open for almost four years until the Battle of Mobile Bay in August 1864 and the Battle of Fort Blakeley in April 1865 forced Mobile to surrender the last major Confederate port. 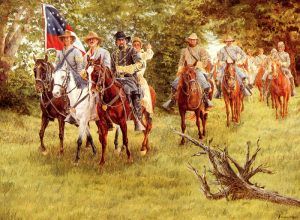 Streight’s Raid in Alabama – April-May 1863 – Union Colonel Abel D. Streight led a raid through Alabama and Georgia from April 19 to May 3, 1863. His goal was to destroy parts of the Western and Atlantic Railroad, which was supplying the Confederate Army of Tennessee. The raid was poorly supplied and planned and was hindered by locals who had the advantage of home territory and opposed the Union. The raid ended with the defeat and capture of Streight and his 1,700 men at Cedar Bluff, Alabama, by Confederate Brigadier General Nathan Bedford Forrest who had 500 men.

Day’s Gap – April 30, 1863 – Also called the Battle of Sand Mountain, this battle occurred in Cullman County, Alabama on April 30, 1863. Union Colonel Abel D. Streight led a provisional brigade on a raid to cut the Western & Atlantic Railroad that supplied General Braxton Bragg’s Confederate army in Middle Tennessee. From Nashville, Tennessee, Streight’s command traveled to Eastport, Mississippi, and then proceeded east to Tuscumbia, Alabama, in conjunction with another Union force commanded by Brigadier General Grenville Dodge. On April 26, 1863, Streight’s men left Tuscumbia and marched southeast with their initial movements screened by Dodge’s troops. On April 30, Confederate Brigadier General Nathan Bedford Forrest’s brigade caught up with Streight’s expedition and attacked its rearguard at Day’s Gap on Sand Mountain. The Federals repulsed this attack and continued their march to avoid further delay and envelopment. Thus began a running series of skirmishes and engagements at Crooked Creek and Hog Mountain on April 30, Blountsville on May 1, and Black Creek/Gadsden and Blount’s Plantation on May 2. Forrest finally surrounded the exhausted Union soldiers near Rome, Georgia, where he forced their surrender on May 3. The running battle resulted in a Union victory, though Streight’s Raid ultimately failed. Total casualties were estimated at 88, with 23 from the Union and 65 of the Confederate. 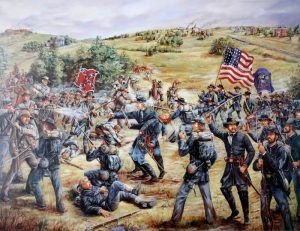 Athens – January 26, 1864 – Also called the Battle of Sulphur Creek Trestle, this battle took place in Limestone County on January 26, 1964. This battle occurred when the Confederate cavalry, led by Lieutenant Colonel Moses W. Hannon led about 600 men in attacking the town of Athens, Alabama which was being held by Union troops. At about 4:00 am on the morning of January 26, 1864, the Rebels attacked Union Captain Emil Adams and his force of about 100 soldiers. Even though the Union defenders had no fortifications and were outnumbered six to one, they were able to repulse the Confederate attack and force them into a retreat after a two-hour battle. The Union victory resulted in an estimated 50 casualties – 20 Union and 30 Confederate.

Franklin-Nashville Campaign, 1864 – The Franklin-Nashville Campaign, also known as Hood’s Tennessee Campaign, was a series of battles in the Western Theater, conducted from September 18 to December 27, 1864, in Alabama, Tennessee, and northwestern Georgia.  The Confederate Army of Tennessee under Lieutenant General John Bell Hood drove north from Atlanta, threatening Major General William T. Sherman’s lines of communications and central Tennessee. After a brief attempt to pursue Hood, Sherman returned to Atlanta and began his March to the Sea, leaving Union forces under Major General George H. Thomas to deal with Hood’s threat. The first two battles of the campaign were fought in Allatoona, Georgia and Decatur, Alabama. Six more battles would be fought in Tennessee before the campaign ended. 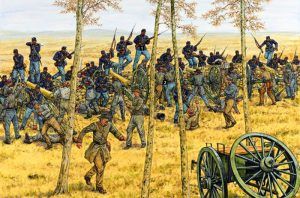 Decatur – October 26-29, 1864 – Taking place in Morgan County and Limestone Counties, on October 26-29, 1864, this battle was part of Confederate General John B. Hood’s Franklin-Nashville Campaign during the fall of 1864. When Hood was marching through northern Alabama on his way to Union-held Tennessee, he originally planned to cross the Tennessee River at Guntersville, Alabama. However, when he learned that it was highly guarded, he changed directions and decided to cross at Decatur, 40 miles to the west. When he and his troops arrived on October 26, they found that this crossing was also heavily fortified with a Federal infantry force of 3,000 to 5,000 men, two forts, two gunboats, and 1,600 yards of rifle pits. On October 27, Hood and his men encircled Decatur and the next morning, he sent Confederate skirmishers through a dense fog to a ravine within 800 yards of the main fortifications. At about noon, a Federal regiment drove the Confederate troops out of the ravine, capturing 125 men. “With the soldiers hungry and supplies scarce”, Hood knew he could not afford the casualties from a full-scale assault and decided to cross the Tennessee River elsewhere. He then marched further westward and crossed near Tuscumbia, Alabama, where Muscle Shoals prevented interference by the Federal gunboats. The Union victory resulted in estimated casualties of 155 Union and 450 Confederate.