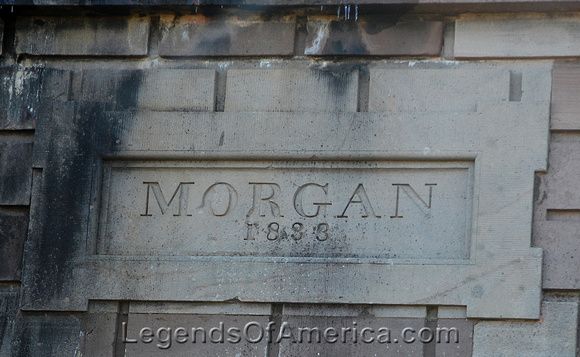 Located on Mobile Point at the end of Fort Morgan Peninsula in Alabama, Fort Morgan was first established as Fort Bowyer during the War of 1812. Constructed by the U.S. Army in April 1813, the fort’s objective was to guard against possible British attack. The “fort” was comprised of an earth and wood redoubt and was named for Colonel John Bowyer, who was in charge of completing the construction in 1814.

On September 15, 1814, the fort was attacked from both by land and by sea by the British Navy and Creek Indians. Known as the First Battle of Bowyer, the earthen fort not only withstood the attacks, but the battle was an outstanding American victory. After hours of cannon fire, one British warship, the H.M.S. Hermes was sunk, another ship was badly damaged, and the British marines and Creek Indians, who attacked by land, were forced to withdraw. In the end, Fort Bowyer had four men killed and five wounded, while the British naval losses were 33 killed and 40 wounded. The battle was one of the most humiliating defeats suffered by British forces during the War of 1812, and news of the victory led to widespread celebrations across the nation.

After the battle, Major Lawrence expressed pride in his command’s conduct during the engagement. He wrote to Major-General Andrew Jackson:

“…every officer and man did his duty; the whole behaved with that coolness and intrepidity which is characteristic of the true American, and which could scarcely have been expected from men most of who had never seen an enemy, and were now for the first time exposed for nearly three hours to a force of nearly or quite four guns to one.”

Several months later, the British returned in early February 1815 after their defeat at the Battle of New Orleans. The combined British land and naval forces vastly outnumbered the American troops this time. Known as the Second Battle of Fort Bowyer, the U.S. Soldiers were forced to surrender the fort. The British moved on towards Mobile to continue their attack, but on their way, they received word that the Treaty of Ghent had been signed, ending the war. The British retreated, and Bowyer was returned to the United States. 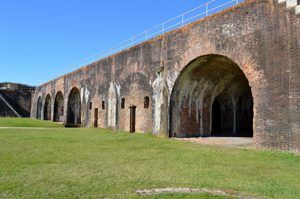 The site continued to defend Mobile Point until the early 1820s. Being a prime location for a defensive military post and with the United States working to strengthen its seacoast defenses, plans for the construction of Fort Morgan began in 1819, but the building wouldn’t start for several years.

Finally, it was turned over to the U.S. Army Corps of Engineers, who began the construction, most of which was conducted by African-American slaves. Construction would take years, however, as brick and mortar were the only materials that could be obtained locally. Other essential construction materials such as finished granite, sandstone, ironwork, and cement had to be shipped by water from New York.

The fort became known as the “Work on Mobile Point.” Nearing completion, it was named Fort Morgan in April 1833, in honor of Revolutionary War hero General Daniel Morgan. Fort Morgan was completed in 1834.

In 1842, the fort was placed in caretaker status and was not garrisoned again until Alabama seceded from the Union. At that time, Southern troops moved quickly to seize both Fort Morgan and Fort Gaines in January 1861. After the Confederacy was formed at the State Capitol in Montgomery in March 1861, Confederate troops occupied the fort. The Confederates then proceeded to strengthen the defenses of Mobile Bay. 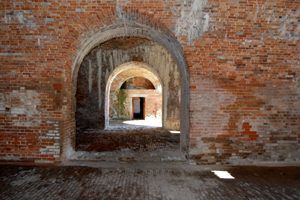 The fort then served as the first line of defense for the city of Mobile and protected blockade runners entering Mobile Bay. They placed 18 of the fort’s heaviest guns to bear on the channel to protect the main ship channel, built redoubts and trenches to impede any attack via land, and placed a small flotilla in the channel.

Standing guard where the bay meets the Gulf of Mexico, the fort played a significant role in the Battle of Mobile Bay in August 1864. At that time, Union naval forces under Admiral David G. Farragut were able to get past Fort Morgan and enter the Bay, where they captured several ships in the flotilla and Fort Gaines. The Union forces then began to besiege Fort Morgan on August 9. After two weeks of bombardment from sea and land, Major Richard L. Page, commander of the fort, felt compelled to surrender on August 23, 1864. The Confederate losses were 17 men killed.

Once the fort was in Union hands, it was used as a base for reconnaissance raids and then as a staging area for the Battle of Spanish Fort and Fort Blakely, which occurred days before General Robert E. Lee surrendered at Appomattox.

Beginning in 1895, the U.S. Army Corps of Engineers began constructing a new fortification system at Fort Morgan. Reinforced concrete batteries replaced the old brick fort between 1900 and 1923. Fort Morgan became the most extensive permanent military base in Alabama with a garrison of over 400 Coast Artillery soldiers. The U.S. Army Quartermaster Department built over 100 structures to support the coast defense mission.

During World War I, 2000 troops were stationed at the fort, training on modern artillery weapons. The Army also established a radio transmitting and receiving station at Fort Morgan as a part of a nationwide Morse-code communication network. After the war, the troops were steadily reduced and in 1923, the post was closed.

During World War II, the U.S. Navy reoccupied the post in November 1941. In April 1942, the Army also reoccupied the fort and constructed an adjacent airfield.

Fort Morgan is at the tip of Mobile Point at the western terminus of State Route 180. It and Dauphin Island, on which Fort Gaines is situated, enclose Mobile Bay. The Alabama Historical Commission maintains the site. 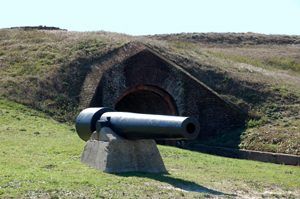 Battles of the Western Theater