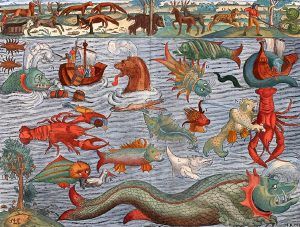 The remarkable sea serpent has been reported at so many points, and by so many witnesses not addicted to fish tales nor liquor, that there ought to be some reason for him.

He has been especially numerous off the New England coast. He was sighted off Cape Ann, Massachusetts in 1817, and several times off Nahant, Massachusetts. Though alarming in appearance — for he has a hundred feet of body, a shaggy head, and goggle eyes — he is of lamb-like disposition and has never justified the attempts that have been made to kill or capture him. Rewards were at one time offered to the seafaring men who might catch him, and revenue cutters cruising about Massachusetts Bay were ordered to keep a lookout for him and have a gun double shotted for action. One fisherman emptied the contents of a ducking gun into the serpent’s head, as he supposed, but the creature playfully wriggled a few fathoms of its tail and made off.

John Josselyn, a gentleman, reported that when he stirred about this neighborhood in 1638 an enormous reptile was seen “coiled up on a rock at Cape Ann.” He would have fired at him but for the earnest dissuasion of his Indian guide, who declared that ill luck would come of the attempt. The sea-serpent sometimes shows amphibious tendencies and occasionally leaves the sea for fresh water. Two of them were seen in Devil’s Lake, Wisconsin by four men in 1892. They confessed, however, that they were fishing at the time. The snakes had fins and were a matter of 50 feet long. When one of these reptiles found the other in his vicinage he raised his head six feet above the water and fell upon him tooth and nail — if he had nails. In their struggles, these unpleasant neighbors made such waves that the fishermen’s boat was nearly upset.

Even the humble Wabash River has its terror, for at Huntington, Indiana, three truthful damsels of the town saw its waters churned by a tail that splashed from side to side, while far ahead was the prow of the animal — a leonine skull, with whiskers, and as large as the head of a boy of a dozen years. As if realizing what kind of a report was going to be made about him, the monster was overcome with bashfulness at the sight of the maidens and sank from view.

In April 1890, a water-snake was reported in one of the Twin Lakes, in the Berkshire Hills of Massachusetts, but the eye-witnesses of his sports let him off with a length of 25 feet.

Sysladobosis Lake, in Maine, has a snake with a head like a dog’s, but it is hardly worth mentioning because it is only eight feet long — hardly longer than the name of the lake. More enterprise is shown across the border, for Skiff Lake, New Brunswick has a similar snake 30 feet long.

In Cotton Mather’s time a double-headed snake was found at Newbury, Massachusetts, — it had a head at each end, — and before it was killed it showed its evil disposition by chasing and striking at the lad who first met it.

A snake haunts Wolf Pond, Pennsylvania, that is an alleged relic of the Silurian age (416.0 to 443.7 million years ago.) It was last seen in September 1887, when it unrolled 30 feet of itself before the eyes of an alarmed spectator — again a fisherman. The beholder struck him with a pole, and in revenge, the serpent capsized his boat; but he forbore to eat his enemy, and, diving to the bottom, disappeared. The creature had a black body, about six inches thick, ringed with dingy-yellow bands, and a mottled-green head, long and pointed, like a pike’s.

Silver Lake, near Gainesville, New York, was in 1855 reported to be the lair of a great serpent, and old settlers declared that he still comes to the surface now and then. 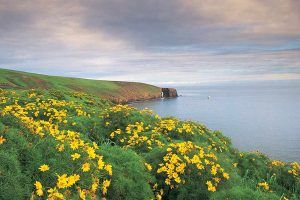 Santa Barbara Island, off the California coast, was, for a long time, the supposed headquarters of swimming and flying monsters and sirens, and no Mexican would pass in hearing of the yells and screams and strange songs without crossing himself and begging the captain to give the rock a wide berth. But, the noise is all the noise of cats. A shipwrecked tabby peopled the place many years ago, and her numerous progeny live there on dead fish and on the eggs and chicks of sea-fowl.

Spirit Canyon, a rocky gorge that extends for three miles along Big Sioux River, Iowa, was hewn through the stone by a spirit that took the form of a dragon. Such were its size and ferocity that the Indians avoided the place, lest they should fall victims to its ire.

The Huron tribe believed in a monster serpent — Okniont — who wore a horn on his head that could pierce trees, rocks, and hills. A piece of this horn was an amulet of great value, for it insured good luck. 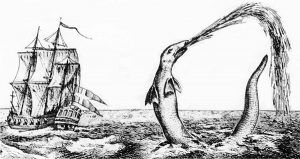 The Zuni tell of a plumed serpent that lives in the water of sacred springs, and they dare not destroy the venomous creatures that infest the plains of Arizona because, to them, the killing of a snake means a reduction in their slender water supply. The gods were not so kind to the snakes as men were, for the agatized trees of Chalcedony Park, in Arizona, are held to be arrows shot by the angry deities at the monsters who vexed this region.

Indians living on the shore of Canandaigua Lake, New York, tamed a pretty spotted snake and fed and petted it until it took a deer at a meal. It grew so large that it eventually encircled the camp and began to prey on its keepers. Vainly they tried to kill the creature, until a small boy took an arrow of red willow, anointed it with the blood of a young woman, and shot it from a basswood bow at the creature’s heart. It did not enter at once; it merely stuck to the scales. But presently it began to bore and twist its way into the serpent’s body. The serpent rolled into the lake and made it foam in its agony. It swallowed water and vomited it up again, with men dead and alive, before it died.