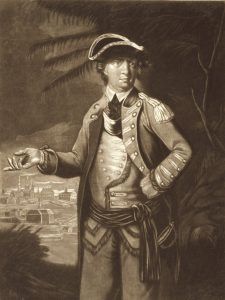 Benedict Arnold, at the head of 1,100 men, had withdrawn from the camp before Boston on September 13th and was pressing forward to join Montgomery. His course was up the Kennebec River, through the gloomy wilderness to the Chaudiere River, down which he passed to Point Levi. The journey was of the most trying nature. The weather became bitterly cold, and the stream was too swift at times for them to make headway against it, except by wading the chilly current and slowly dragging the boats against it. At other places, even this was impossible, and the heavy boats had to be laboriously carried around the falls and rapids.

Finally, the time came to leave the river and plunge into the snowy forests, where all would have been lost, had not a small party, sent in advance, “blazed” the trees. There was plenty of ice in the swamps, but none was strong enough to bear their weight, and they sank through to their knees in the half-frozen ooze. Toiling doggedly forward, a month passed before they reached Duck River, by which time they were in a starving condition. Their provisions gave out, and they ate dogs and candles. Some, in their extremity, chewed boiled moccasins for the infinitesimal nourishment to be extracted from them. Roots and the bark of saplings were devoured, and the wonderful courage of Arnold was all that prevented the men from throwing themselves on the ground and giving up. So many fell ill and died that Colonel Rogers Enos, in command of the rear division, turned about with his men and returned to Cambridge.

Nothing, however, could shake the dauntless courage of Arnold. He pushed on, and, obtaining a few cattle, was able to give his men temporary relief. Winter was closing in, the weather was growing colder every day, many men were barefoot, and without any protection against the icy rain except the branches of the leafless trees. The wonder is that the whole band did not perish. Finally, On November 4th,  the famishing band caught sight of the first house they had seen in weeks. Traveling now became better, and about a week later they reached Point Levi, opposite Quebec. There they had to wait several days to procure canoes, with which the 700 men, resembling so many shivering tramps, crossed the St. Lawrence River and huddled together under the Heights of Abraham.

What earthly hope could such a body of men, without cannon, with injured muskets and powder, and cartridges partly spoiled, have in attacking the walled town of Quebec? None, unless the Canadians made common cause with them. Following the steep path up which Wolfe and his brave men had climbed 17 years before, the gaunt Americans struggled after their intrepid leader. The next act in the grim comedy was to send forward a flag of truce with a demand for the surrender of Quebec. General Carleton must have smiled at the grotesqueness of the proceeding when he sent back a refusal. A few shots followed, when Arnold, finding he had not half a dozen rounds of ammunition apiece for his men and was in danger of being attacked himself, retreated to a point 20 miles below Quebec, where Montgomery joined him on December 1st and assumed command.

The Americans now numbered 3,000 and had six fieldpieces and five light mortars. They set out for Quebec, in front of which they encamped four days later. Of all the series of disastrous invasions of Canada, none was more dismal and pathetic than that of Montgomery and Arnold. The winter was unusually severe for a region which is noted for its intensely cold weather. The ground froze to the hardness of a rock, and, unable to make any impression in it with shovel and pick, the besiegers threw up walls of ice, which the cannon of the defenders sent flying into thousands of fragments. The men grew mutinous, and, realizing the desperate situation, Montgomery ordered an assault to be made on the last day of the year. The plan was for the first division under Montgomery to move down the river and attack the lower town near the citadel, while the second division under Arnold was to pass around the city to the north, assault by way of the St. Charles, and unite with Montgomery in his attack upon the Prescott gate. The other two divisions were to remain in the rear of the upper town and divert the garrison by feint attacks. 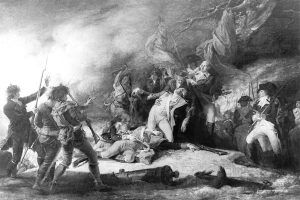 A blinding snowstorm was raging and the men could hardly distinguish one another. Success depended upon surprise, but the defenders had learned of the intended attack, and Montgomery had hardly started when the battery delivered a fire which instantly killed him and both his aides. Their deaths threw his men into a panic, and they fled in such haste that they escaped the fate of their leaders.

Meanwhile, Arnold had moved, as agreed upon, with his division along the St. Charles River, the men bending their heads to the icy blast and protecting their muskets under their coats. As soon as the garrison caught sight of the dim figures they opened fire, but the Americans pressed on and carried the first barricade. Arnold, however, received a severe wound in the leg, and, suffering great pain, was carried to the rear. Daniel Morgan, one of the bravest officers of the Revolution, succeeded to the command, and, with his riflemen at his heels, was the first to climb the ladders placed against the barricade. Two musket balls grazed the leader’s face, which was scorched by the flash, and he was knocked down; but he instantly sprang to his feet and called upon his men to follow him. They did so with such dash that the enemy took refuge in the houses on both sides of the street.

But for the disaster that had overtaken Montgomery, Quebec probably would have been captured, but Morgan’s command was in darkness, the driving snow interfered with tiring, and they knew nothing of the town. Only a few of the troops found the next barricade, and, when they climbed the ladders, were confronted by leveled muskets whose fire was very destructive. Not only that, but the British, who had taken refuge in the houses in the streets, kept up their firing.

The Americans fought for a long time with the greatest heroism, but after the loss of some 60 men, the remainder, with the exception of a few that had fled, were obliged to surrender. The fragments of the helpless army fell again under the command of the wounded Arnold, who, despite the hopelessness of the attempt, still pressed the siege of Quebec. He had sent an urgent message to Schuyler for reinforcements. They straggled through the wintry forests to his aid, some 3,000 arriving in the course of the winter. Carleton, who was too wise to venture out on the plain as Montcalm had done, felt secure behind the walls and gave little heed to the ragged swarm huddled together in front of the town.

General David Wooster brought fresh troops in March and assumed command. He lacked military skill, and two months later was succeeded by General John Thomas. The latter saw that he had no more than 1,000 effective troops under his control, and decided to withdraw the ill-starred expedition. Carleton, who had received large reinforcements, attacked him on his retreat and captured 100 prisoners and nearly all the stores. The sufferings of the Americans were now aggravated by smallpox, which broke out among them and caused many deaths, General Thomas being one of the victims. General John Sullivan succeeded him in command. He lost a number of prisoners and retreated to Fort Ticonderoga and Crown Point, thus bringing the disastrous expedition to a close in the month of June 1776.

It is proper that tribute should be given to the humanity of Carleton, the British commander. He ordered a search to be made in the snow for the body of Montgomery, and, when it was found, it was brought into the city and buried with the honors of war. Other parties scoured the woods for the suffering Americans, who were placed in the hospital and received tender care. Those who voluntarily came in were allowed to go as soon as they were strong enough to travel, and to the needy ones, Carleton furnished the money. A half-century later the remains of Montgomery were brought to New York and deposited beneath the monument in St. Paul’s churchyard.

Source:  Morris, Charles; A New history of the United States: The greater Republic; 1899