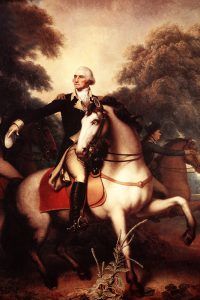 If General Howe had followed up this victory and quickly besieged the American army, he would certainly have captured it. Here was a rare chance for the British to bring the war to a speedy close.

Too wise to storm the hilltop on which the enemy was encamped, they planned to surround Brooklyn Heights and starve its holders into surrender; but they did not act quickly enough. Washington realized the enemy’s plan, and, ever ready for an emergency, he outwitted them. He sent trusted messengers across the river to gather together boats of all sorts. Into these, at nightfall, Washington loaded his entire force, with firearms, horses, and supplies. Through the still darkness, they made many trips, with Washington on the bank, keeping order and quiet. He was the last man to leave the shore.

When the British awoke the next morning they found the Americans were gone. General William Howe crossed the river in pursuit and General George Washington retreated northward to Harlem Heights. Several skirmishes took place in the vicinity, but after a few weeks, Washington was forced to abandon New York. With part of the army, he retreated to New Jersey, sending orders to General Charles Lee to join him with other troops. But Lee was jealous of his superior officer and found some excuse for not obeying.

Washington, deprived of the aid he had been counting on, found himself in a most critical position. The British were in hot pursuit. They pushed him hard across New Jersey, but, Washington skillfully hindered their progress by burning bridges and destroying supplies.

It was not difficult to follow the American line of march. Many of them, shoeless, left behind footprints of blood upon the frozen ground. Many were going home because their term of enlistment had expired and others were deserting. This state of affairs became known to the British and General Charles Cornwallis, concluding that the war would soon be over, began to pack his trunks for home. But, he was premature. 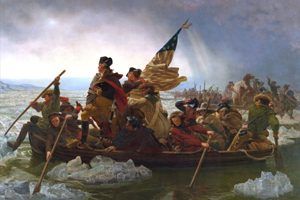 General Washington had been forced to put the Delaware River between himself and his pursuers, but, he was finally re-enforced by the troops General Charles Lee had been holding back. At Trenton, New Jersey there were more than a thousand Hessians, comfortably settled in winter quarters. Washington planned to surprise them on Christmas night, 1776. Despite the fact that the river was clogged with cakes of floating ice, some fishermen-soldiers undertook the difficult task of rowing Washington’s army across the river. Then came the long march of nine miles to Trenton. On the way, two men died of cold and the sleet made the muskets damp. When someone suggested to Washington that they would be of no use, he replied,” Use bayonets, then. We must take that town.”

Separating into two parties, the patriots entered Trenton at dawn from two different directions. When the first shot rang out, the Hessians, stupefied and half-dressed, rushed into the streets. There was nowhere to escape. The dazed commander tried in vain to gather his men in line. All too late, he recalled the fact that in the midst of the Christmas merriment, someone had handed him a note which he had thrust into his pocket. It was a warning brought by a spy and told of the coming of Washington and his troops. The next day the unopened note was found on his dead body. In about an hour Washington was in command of the town, with 1,000 Hessians as his prisoners, together with a great store of war supplies.

British General Charles Cornwallis came posthaste from New York to Princeton and advanced with an army. On January 2, 1777, he was just south of Trenton, New Jersey. Nothing but a small creek separated him from the American army.

His men were tired and it seemed advisable to him since he had the enemy where he could watch them closely, to wait until the morning and then make a brilliant capture. So narrow was the separating stream that the British sentinels heard the American soldiers talking together as they piled wood on the campfires and dug entrenchments. The next morning; however, Cornwallis awoke to find the opposite side of the stream deserted. The British had been deceived. The campfires and the noise of pickaxes had been kept up only to cover the flight of the Americans in the darkness. The distant roar of cannon, in the rear, told the English that Washington had marched his men around their army.

Near Princeton, General George Washington met some British who were going to re-enforce Cornwallis. The “old fox,” as Cornwallis called him, routed them successfully and pushed on to a strong position at Morristown, New Jersey. This was a wonderful piece of work on Washington’s part. It really undid all that the English had accomplished in six months. Except that they had gained New York, they were no better off than when they started. In the meantime, Washington safe at Morristown, New Jersey and in control of most of the colony. At the same time, he was where he could reach the Hudson Valley in case of need. Washington had conducted a whole campaign in nine days.

The patriots were cheered by the skillful leadership of the commander in chief and by the sturdy bravery of his men. Nevertheless, they had not raised money to pay their soldiers in a long time. The reason for this was that Congress had no money — nor any means of getting any. Though they could ask the colonies for money, they not compel them to pay. 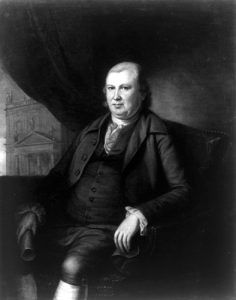 Robert Morris, a banker and friend of George Washington,
raised $50,000 for the desperate patriots.

All through the war, Congress was hard-pressed to raise money. In 1775 the government had started making paper money — bills which were nothing but printed promises to pay. It continued throughout the war to issue these bills, asking the people to accept them in place of coin. But, the people did not have confidence in the old Continental government and thought it very unlikely that it would live to pay coin for these written promises. As a result, vendors were very slow to take the paper money in return supplies and services. As a result, the paper gradually became almost worthless. By the end of the war, many million dollars of this paper money had been issued, and it was never redeemed.

With so much trouble over money matters, Washington found it hard to hold the troops together. In desperation he wrote to his friend, Robert Morris, a wealthy banker of Philadelphia, Pennsylvania, asking him to get $50,000 in money as quickly as he could. On New Year’s Day, Morris went calling. At the doors of friends and strangers, he knocked and asked for help. By noon he had raised the required amount, and Washington received it in time to save the army.

While Washington was trying to strengthen his army the British were planning for the coming summer. They saw plainly that its plans of holding the city of New York were not enough. They needed to conquer the entire state.

They then laid out a threefold plan. 1) – General John Burgoyne was to invade New York state by way of Canada and Lake Champlain. 2) – Colonel Barrimore St. Leger was to go by way of the St. Lawrence River and Lake Ontario into the Mohawk Valley to join Burgoyne on the Hudson River. 3) – General William Howe, with the greater portion of his army, was to leave the city of New York and go up the Hudson River, joining the other two at Albany, New York.