Fort Stanwix, New York, was a colonial fort that began to be built under the direction of British General John Stanwix on August 26, 1758. Located in present-day Rome, New York, it was not completed until about 1762. It was established to guard a portage known as the Oneida Carrying Place during the French and Indian War. The bastion fort was built on a strategic site along the water route from Lake Ontario to the Hudson River. However, it played no significant part in this conflict.

In June 1776, American forces captured and rebuilt the fort during the Revolutionary War. Sometimes called Fort Schuyler by the patriots, it was garrisoned with as many as 800 men in time to block British invasion objectives in the Mohawk Valley in the summer of 1777. General John Burgoyne advanced south from Canada via Lake Ontario, hoping to reach the Hudson River. Colonel Barry St. Leger, with more than 1,000 regulars, Tories, and Indians, was to move down the Mohawk Valley to Albany and join the larger British forces after rallying Tories and Indians on his route.

St. Leger arrived at Fort Stanwix on August 3 but was rebuffed when he demanded its surrender. The action was limited to sniping until August 6, when the bloody battle was fought at Oriskany, some six miles to the east, between St. Leger and an American militia force under General Nicholas Herkimer. The patriots were badly mauled and did not succeed in raising the siege of Stanwix, but a detachment from the fort raided the British position, destroying provisions and camp equipment during the action. This encouraged the besieged, who held firm while St. Leger began formal siege operations. He had advanced his works to within 150 yards of the fort when word came of the approach of an American relief force under General Benedict Arnold. 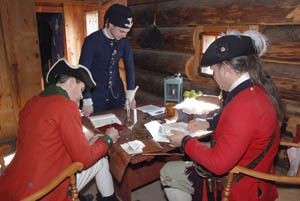 Having lost the confidence and support of his Indian “allies,” St. Leger was obliged to abandon the siege near the end of August, retiring in disorder to Canada. The retreat to Canada after its failure to take Fort Stanwix was a blow to the British concentration strategy at Albany, contributing to the defeat of Burgoyne at Saratoga a few months later.

Fort Stanwix was also the site of the 1768 Treaty of Fort Stanwix between Britain and the Iroquois Indians. Signed on November 5, 1768, the Iroquois Indians ceded a vast territory south and east of the Ohio River, as far west as the mouth of the Tennessee River. The treaty thus cleared the way for a new and significant surge of westward settlement.

The fort’s remains were cleared before the middle of the 19th century. Near the end of that century, after some controversy about the location, an effort was made to mark the outline at several points. Barring archeological investigation, it is difficult to say how successful this was. The site is built over with roads, houses, and commercial developments. Today, the site of Fort Stanwix occupies approximately a city block in the heart of Rome, New York, and no physical evidence of the post is visible.

Fort Stanwix National Monument is a reconstructed Revolutionary War-era fort with related outworks built on the site of the original Fort Stanwix. The National Monument site occupies approximately 16 acres and is bordered by main thoroughfares surrounded by commercial, residential, light industrial, and institutional land uses. The site of the fort, but not the reconstructed structure, is listed in the National Register of Historic Places and is a National Historic Landmark, significant for the events that transpired there and its role in the American Revolution.

President Franklin Delano Roosevelt signed the enabling legislation for the national monument into law on August 21, 1935. Fort reconstruction began in the mid-1960s in tandem with an urban renewal program in downtown Rome to build two large city blocks anchored by a pedestrian mall. The National Park Service completed a master plan for Fort Stanwix in 1967. This plan recommended full reconstruction of the fort, the ruins of which lay beneath the City of Rome’s downtown. In 1970, the Park Service began a three-year archeological investigation of the site of Fort Stanwix. In 1974, the reconstruction of the fort began. In 1976, the partially completed reconstructed fort opened to the public in time for the nation’s celebration of the 200th anniversary of the signing of the Declaration of Independence. In 1977-78, further reconstruction work was done. 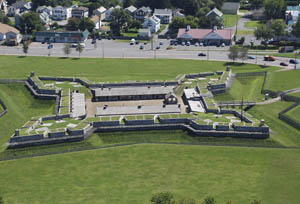 Fort Stanwix, New York from above, by the National Park Service.

The national monument includes three short trails that encircle it, one of which follows a portion of the Oneida Carry. The Marinus Willett Collections Management and Education Center preserves the monument’s 485,000 artifacts and documents, displays exhibits about Fort Stanwix and the Mohawk Valley, and serves as a regional tourism center.