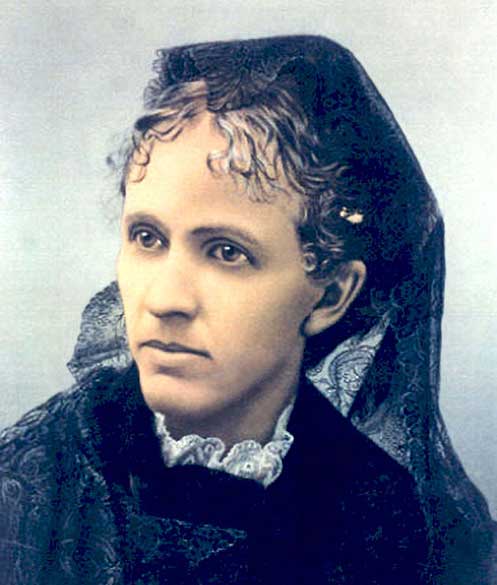 “Zee” Mimms was born on July 21, 1845, in Logan, Kentucky, to Pastor John W. Mimms and Mary James Mimms. Zerelda was one of twelve children. Her mother was the sister of Robert James, Jesse James‘ father, making them first cousins. Zee, as she was more familiarly called, was actually named for Jesse’s mother. This; however, did not stop the pair from falling in love while Jesse was living temporarily with his aunt and uncle Missouri in 1865.

The couple was engaged for nine years while the James-Younger Gang was in full swing. Finally, they married at her sister’s home in Kearney, Missouri on April 24, 1874. While honeymooning with his bride Zee on the Gulf of Mexico at Galveston, Texas, a reporter from the St. Louis Dispatch, did what the Pinkertons had failed to do, track down Jesse.

A little more than a year later, Zee bore their first child, Jesse Edward “Tim” James on August 31, 1875. On February 28, 1878, the couple had twins, Gould and Montgomery; however, both were either stillborn or died the same day. The next year, Zee had a daughter that the couple named Mary Susan James on June 17, 1879.

By this time, the James-Younger Gang had ceased to exist with the capture of the Younger brothers during the Northfield, Minnesota raid in 1876. However, Jesse had started a “new” James Gang that continued to rob trains, the last of which occurred on September 7, 1881, near Glendale, Missouri. Shortly after this hold-up, Jesse moved his family to St. Joseph, Missouri where they settled in under Jesse’s assumed name of Tom Howard. With a $10,000 reward over his head, Zee tried to get Jesse to take on a more normal life. And Jesse agreed, right after one last great bank robbery in Platte County, Missouri. It was during the planning of this robbery in a meeting with Charles and Robert “Bob” Ford at Jesse’s home, that Jesse would be killed by Bob on April 3, 1882.

Sadly, Zee and her children were in the kitchen when the shooting occurred. At the deafening sound of the gun blast, young Jesse, Jr. ran into the living room to find his father on the floor with blood pouring from his head. Zee then began to scream as little Mary started crying. Though Zee tried desperately to stop the blood, it was too late, her husband was already dead.

Bob Ford was already out the door and Charles spent a few moments trying to tell her how the gun had gone off accidentally. Then, he too, made a quick exit, running after his brother.

In no time, the word spread of the shooting and crowds began to gather around the home talking incessantly about the killing of the notorious outlaw, Jesse James. Young Jesse, Jr., who was only six at the time, didn’t even know who “Jesse James” was, believing his father’s name was “John Davis Howard” and his own name to be “Tim Howard.”

After his death, Jesse was packed on ice and taken by train to Kearney, Missouri where he was displayed and viewed by hundreds of friends, admirers, and curiosity seekers. Later he was buried on the family farm in a plot near the house so that Jesse’s mother, Zerelda, could keep an eye out for trespassers or souvenir hunters.

When Jesse was killed, most people assumed that he had left a wealthy widow, but that was not the case at all. In fact, the only valuables that they owned were a few weapons, a bit of stolen jewelry, and assorted memorabilia. Soon, most everything in the household was put up for auction in order to pay the creditors. Zee and her children were then forced to move in with her brother in Kansas City. 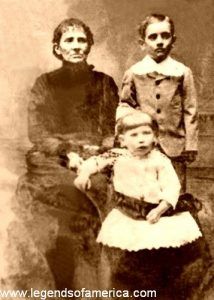 The children were to suffer even more, as Zee suffered from terrible depression after Jesse’s death.

Donning entirely black clothing, she never changed out of it, never remarried, and became a recluse. Young Jesse James, Jr. was forced to go to work at the age of eleven to help support his mother and little sister. Though the family suffered emotionally and financially for the rest of Zee’s life, she refused all offers to publish books or other information regarding Jesse’s life.

She died on November 13, 1900, in Kansas City, Missouri, and was buried in the Mount Olivet Cemetery in Kearney, Missouri. About 18 months later, her husband would be moved from his resting place on the James Family Farm and placed next to her, where their bodies remain today.

“I am not in good circumstances and a little money would greatly assist me.”
– Zee James after the death of her husband, Jesse, was forced to sell some precious family momentoes.