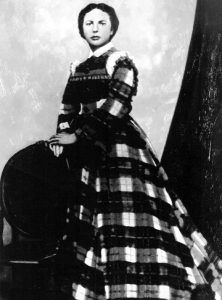 Dora Hand, aka: Fannie Keenan was a celebrated actress and variety show entertainer who was shot and killed in the lawless town of Dodge City, Kansas.

Hand is thought to have been born in New York in about 1844. According to legend, she was a descendant of a prominent Boston family and grew up to study music in Europe. She then performed opera in New York City and traveled for performances in the east.

At some point, she was diagnosed with tuberculosis and was advised to move west to a dryer climate. Dora was married to a musician named Theodore Hand. However, she divorced him in Indiana, later landing in Memphis, Tennessee, and in St. Louis, Missouri in 1876. By 1878, she was entertaining the many men in the cowtown of Dodge City, Kansas. Appearing in several variety shows under her stage name of Fannie Keenan, the actress was staying at Mayor James Kelley’s house, as he was out of town. It is unknown as to whether Dora knew that the mayor had recently been in a brawl with a man named James Kennedy, the son of a Tascosa, Texas cattleman. But, for the actress, the dispute would be fatal.

Kennedy had been sent with a herd of cattle to Dodge City and while the cowboy was in Mayor Kelley’s saloon, Kelley threw him out for being drunk and disorderly.

Humiliated, Kennedy swore revenge upon the mayor. A short time later, Kennedy briefly left Dodge City but returned to exact his revenge upon Kelley. The mayor; however, was not home, and in his bed, instead, was Dora Hand. Late in the night of his return, Kennedy rode to Kelley’s residence and fired four gunshots into the house before fleeing. One shot struck Dora on her right side, killing her instantly. Hearing the gunfire, officers Jim Masterson and Wyatt Earp hurried to the house to find Dora Hand dead. Witnesses stated they had seen Kennedy riding away from Dodge City and a posse was formed to go after him. Soon, Bat Masterson, Bill Tilghman, William Duffy, Charlie Bassett, and Wyatt Earp tracked the killer to Meade, Kansas, Inevitably, Kennedy didn’t want to be brought in and a gunfight ensued and Kennedy was wounded in his shooting arm. He was brought back to Dodge City, where he recovered.

Though Kennedy was tried, he was acquitted of the murder due to a lack of evidence. But, time would get its just revenge when Kennedy was killed three years later in a gunfight. In the meantime, Dora Hand was buried in Dodge City’s Boothill Cemetery.