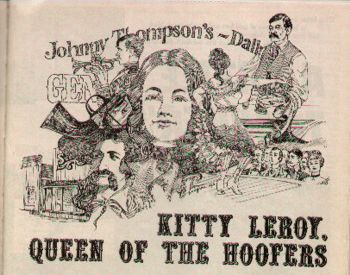 Drawing by Wane Guard in story about Kitty Leroy. Image from Genealogy Images of History.

A gunfighter, gambler, performer, and alleged prostitute, Kitty Leroy, born in 1850, was best known as one of the most proficient poker players in the Old West. Thought to have been from Michigan, she was performing as a dancer by the age of ten, and as she got older, she began to work in dance halls and saloons, where she picked up several other skills, specifically proficiency with weapons and at games of chance.

When she married her first husband, legend has it that he was the only man in town with the nerve to let her shoot apples off his head. But Kitty was restless and wanting to take her “show” on the road, she headed to Texas, leaving her husband behind.

By the age of 20, she was said to have been one of the most popular entertainers in Dallas, Texas. However, she soon gave up dancing to become a faro dealer and was noted for never going to the faro tables without several knives and revolvers.

Her skills with weapons and gambling proficiency became legendary, as well as her mode of dress which ranged from dressing like a man to extravagant gypsy-like attire. While in Texas, she acquired a second husband, and the two soon headed to California.

A third marriage apparently took place somewhere along the line, a man she was said to have married due to a guilty conscience. In this incident, the story tells us that when the man became too ardent in his affections for her, she challenged him to a fight. She donned men’s clothing when he refused to fight a woman and challenged him again. She then allegedly shot him and, as he lay wounded, called for a preacher and married him before he died. 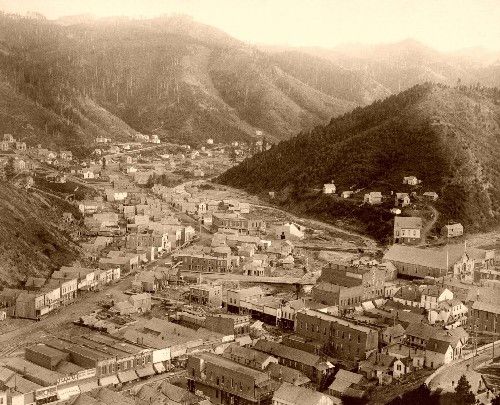 When the Black Hills gold rush began in South Dakota, Kitty made her way to the thriving boomtown of Deadwood, arriving on the same wagon train that brought Wild Bill Hickok and Calamity Jane to the camp in 1876.

She soon opened the Mint Gambling Saloon, where she met her fourth husband, a German prospector who made a rich gold strike. However, when the German’s gold ran out, so did Kitty’s interest. She was then said to have hit him over the head with a bottle before kicking him out of their home and her life.

On June 11, 1877, Kitty married her fifth husband, Samuel R. Curley, in Deadwood. But, for Kitty, this would be a fatal mistake. Curley was a jealous man, and after numerous arguments over alleged affairs with a former husband and others such as Wild Bill Hickok and Sam Bass, he killed her on December 7, 1877, in the Lone Star Saloon before turning the gun on himself. The following day, the townspeople allegedly laid out the pair for viewing inside the saloon before they were buried together.

A journalist later said of the 28-year-old that she “had five husbands, seven revolvers, a dozen Bowie knives, and always went armed to the teeth.”

There is no evidence that Kitty was a prostitute, but as many of the Deadwood saloons offered those “services,” she may very well have been a “madam.”

She had a daughter somewhere along the line, as Deadwood newspapers of the time indicate that her estate was left to her daughter. 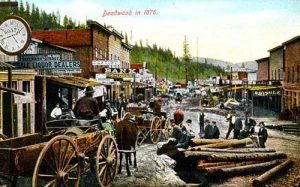 Faro, or “Bucking the Tiger”