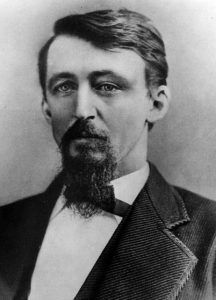 ‘What plans do you propose to accomplish that?’ I asked, anxious to get his ideas and to ‘size him up.’ He replied that fire-arms must be given up; that whiskey and pistols were a combination beyond control. ‘As well contend,’ he said, ‘with frenzied maniac as with an armed and drunken cowboy.’ His logic was well-grounded, but the images of the obliterated ordinance-placards that had been used for targets were equally impressed; besides, my recent study of cowboy nature and training had matured convictions in my mind respecting the inherent difficulty of determining whether a cowboy and his gun were separable elements, even under normal conditions. But I mastered my rising skepticism and inquired if he really thought that he could enforce that ordinance.

‘When do you want to begin?’ I asked.

‘As well at once,’ he quietly replied.

“Then I recited the oath of office to him as we stood there alone. How well I recall the scene at that moment! I was about a foot above the ground, facing northwesterly. The bright gleams of the setting sun an athwart Smith’s square right shoulder struck me in the face. As he raised his hand for the oath in response to my own, the blinking glimmer of the rays made me lift my other hand to shield my eyes as I peered searchingly into his own. If I could but picture vividly, like kineograph [a flip-book with a series of pictures], the full perspective spread before my vision then, what priceless treasure for your archives it would be! Silently he moved off, and I watched him, with misgivings, disappear downtown, a third of a mile away.

“Almost immediately he encountered Big Hank, cowboy desperado, who had made himself particularly obnoxious to former marshals and had been loudest in his boasts that no one could disarm him. Wearing a belted revolver, he approached Smith and tauntingly asked him if he were the man who proposed to run the town. Smith said that he had been employed as Marshal and that he should try to maintain order and enforce the law.

‘What are you going to do about that gun ordinance?’ asked Hank.

‘See that it is obeyed,’ replied Smith; and then he quickly added, ‘I must trouble you to hand me yours.’

“With a coarse oath this was refused. Characteristically cool, Smith again made the demand and again met with profanity and abuse. Instantly he sprang forward and landed a terrific blow which placed Big Hank out of action. The Marshal took away the pistol and ordered its owner at once to leave for camp, a command heeded with crest-fallen speed. “Before midnight the news of this encounter had been heralded over a radius of many miles throughout the country. The unique punishment administered was wholly new to cowboy warfare, and every phase of the combat was debated. In camp, out on a branch of Chapman Creek, a wager was laid by a big, burly brute that he could go to town and defy to surrender of his gun. Promptly the next morning, a Sunday, Wyoming Frank was on hand to fulfill his boast, Smith was rather late in appearing. The desperado, impatient and drinking, began boasting that the Marshal had probably heard that he was in town, and he ‘reckoned that he had lighted out.’ Finally, Smith came quietly down the middle of the street, as was his wont, and presently confronted the advancing bully. Quite as Big Hank had done the evening before, Wyoming Frank began ‘chaffing’ insolently, with the idea of involving Smith in the quarrel as an excuse or resisting the demand he knew would be made. Divining his purpose, Smith guardedly requested the surrender of the gun that was purposely displayed. Of course this was refused, but somewhat daunted by the peculiar, steely glint of Smith’s eyes, the bully began backing as Smith advanced quietly, calling for his gun. Frank steadily retired, maneuvering for time and space in which to draw his pistol and thus have the drop on Smith. But he was backed by the latter’s close reach. Finally, they backed into a large saloon, where the crowd that had been attracted gathered and surrounded them. In the center, Frank came to stand, facing Smith. To his courteous but firm demand, Frank exploded an insulting oath and vile epithet. Quick as a flash Smith vaulted and, with terrific double blow, sent his antagonist prone to the floor, and with the unbelted pistol vigorously belabored the big brute. Then, standing him, Smith said: ‘I give you five minutes to get out of this town, and don’t you ever again let me set eyes on you.’ The latent demon in Smith blazed defiance to every spectator. 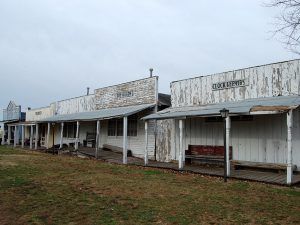 “For an instant, all stood dazed and speechless, whereupon the saloon proprietor stepped from behind the bar and said to Smith: ‘That was the nerviest act I ever saw. You did your duty, and that coward got what he deserved. Here is my gun, reckon I’ll not need it as long as you are marshal of this town.’ That was the signal. Everyone pushed forward proffering Smith pistols and overwhelming him with a profusion of compliments, expressions of admiration, and so forth. He quietly thanked them, and said: ‘Hand your guns to the bartender to keep until you want to get out of camp.’ From that moment Torn Smith was master. The cowboys, as tribute to his marvelous nerve and gentlemanly self-command, became his allied and loyal friends. No guns thereafter were openly worn on the streets of Abilene while Smith was Marshal; nor was he ever again openly affronted. Of course, there were drunkenness and quarreling; dens of iniquity flourished; murders occurred; but his tact, courage, and good judgment were always adequate to minimize consequences and without resistance. Smith became alike popular with merchants, citizens, cowboys, gamblers, and saloon-keepers. In short time he ruled Abilene practically without oversight.

“But there was another element in Abilene with which Smith had to deal — the ‘bad-man’ desperadoes. At one time a gang of them planned to get him into a house, to put out the lights, and then to shoot him. They did get him into the house and the lights were put out, but no sooner had the shooting begun than Smith, too, opened fire. The battle ended in about minute after 30 shots had been fired, but Smith was unhurt. That was the only provocation that ever led him to lose his temper to my knowledge, and he surely did so at that time. He came to my office the next day and swore he would kill at sight the man whom he knew was the leader in the conspiracy. But, as it turned out that man was not again seen in Abilene. Smith had in him the making of a veritable devil when aroused, but he was such a master of himself that it required extreme provocation to arouse him.

“One bright morning early in November Smith rode up to my office on Silverheels, his beautiful dappled gray, and asked permission to go into the country to aid his deputy in arresting man named McConnell. A short time before, McConnell had shot and killed a neighbor in a quarrel over some crop damage done by the latter’s cattle. He said McConnell was reputed to be a desperate character; besides, the deputy did not know the way out there, 12 miles across the prairie. I suggested that he look around the town, see who was in from the camps, and if the prospects seemed favorable for a quiet day we would run the chances. He acted on my suggestions, and a half an hour later reported that he would take the risk. With a tip of his hat and a smile, he rode away — fated to be his last ride. He took over the writ from the deputy, and his attempt to serve it ended in the tragedy that closed the career of that generous soul; that brave and dauntless officer. He was shot dead. The mission which cost him his life was prompted by motives of friendship for the deputy. The impulse to share where danger lurked led to his own sacrifice. Unswerving loyalty to his friends and fearless devotion to duty, twin characteristics throughout his life, unhappily made for his martyrdom.

“Thomas J. Smith was born in New York city about the year 1840. His parents were Irish by birth. His Celtic origin showed in his physiognomy and build. In temperament, character, and bearing he was thoroughly American. He was nearly five feet eleven inches in height, weighed 170 pounds, was broad-shouldered, erect, athletic, and physically superb. Of fair complexion, auburn hair, a light mustache, and gray eyes with bluish tint — his most expressive features when aroused. His manners were gentle, unobtrusive, and simple; his dress unpretentious, and sensible; his voice low-toned and evenly modulated; his language plain and direct. 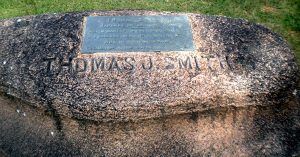 “Smith was fairly well educated; reared Catholic; clean of speech — I never heard him utter a profane word, nor employ a vulgar phrase. He never gambled, drank, nor was in the least otherwise dissolute. He was singularly and perhaps significantly reticent as to his early life. I cannot learn that he ever mentioned his family, nor was it ever known if he had any living relatives. He had been well-bred, and good blood coursed in his veins. Some sorrow,  or tragedy, mayhap early drove him from home and friends out alone into the far West. It is nearly authenticated that he was a victim in the Mountain Meadow Massacre, and left for dead. Certainly, little later, he was in western Utah and Nevada.”

The bronze tablet affixed to the granite boulder monument that stands at Smith’s grave bears the following inscription:

Thomas J. Smith
Marshal of Abilene, 1870
Died a Martyr to Duty, Nov. 2, 1870.
Fearless Hero of Frontier Days, Who, in Cowboy Chaos, Established the Supremacy of Law