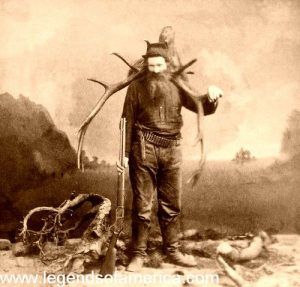 The majority of old-time trappers and scouts always had an inexhaustible fund of anecdote and adventure. Stories were often told at night when the day’s duty of making the round of the traps was done, the beaver skinned, and the pelts hung up to cure. Their simple supper disposed, and being comfortably seated around their fire of blazing logs, each one of them indulged, as a preliminary, in his favorite manner of smoking. Some adhered to the traditional clay pipe, others, more fastidious, used nothing less expensive than a meerschaum. Many, however, were satisfied with a simple cigarette with its covering of corn husk. This was Kit Carson’s usual method of smoking, and he was an inveterate partaker of the weed. Frequently there was no real tobacco to be found in the camp; either its occupants had exhausted their supply, or the traders had failed to bring enough at the last rendezvous to go round.

Then they were compelled to resort to the substitutes of the Indians. Among some tribes the bark of the red willow, dried and bruised, was used; others, particularly the mountain savages, smoked the genuine kin-nik-i-nick, a little evergreen vine growing on the tops of the highest elevations, and known as larb.

It was a rare treat to come across one of those solitary camps when out on a prolonged hunt, for the visitor was certain of a cordial welcome, and everything the generous men had was freely at your service. The crowning pleasure came at night when stories were told under the silvery pines, with troops of stars overhead, around a glowing campfire, until the lateness of the hour warned all that it was time to roll up in their robes if they intended to court sleep.

Let the reader, in fancy, accompany us to some thunder-splintered cañon of the great rock-ribbed Continental Divide, and when the shadows of the night come walking along the mountains, seek one of these sequestered camps, take our place in the magic circle, and listen to wondrous tales as they are passed around. There is nothing to disturb the magnificent silence save an occasional soughing of the fitful breeze in the tops of the towering pines, or the gentle babbling of some tiny rivulet as its water soothingly flows over the rounded pebbles in its bed. There is a charm in the environment of such a spot that will photograph its picture on the memory as the gem of all the varied experiences of a checkered life.

One of the best raconteurs was Old Hatcher, as he was known throughout the mountains. He was a famous trapper of the late ’40s. Hatcher was thoroughly Western in all his gestures, moods, and dialect. He had a fund of stories of an amusing, and often of a marvelous cast. It was never any trouble to persuade him to relate some of the scenes in his wayward, ever-changing life; particularly if you warmed him up with a good-sized bottle of whiskey, of which he was inordinately fond.

When telling a story he invariably kept his pipe in his mouth, using his hands to cut from a solid plug of Missouri tobacco, whenever his pipe showed signs of exhaustion. He also fixed his eyes on some imaginary object in the blaze of the fire, and his countenance indicated a concentration of thought as if to call back from the shadowy past the coming tale, the more attractive, perhaps, by its extreme improbability.

He declared that he once visited the realms of Pluto, and no one ever succeeded in disabusing his mind of the illusion.

The story is here presented just as he used to tell it, but divested of much of its dialect, so hard to read, and much more difficult to write:

“Well!” beginning with a vigorous pull at his pipe. “I had been down to Bent’s Fort to get some powder, lead, and a few things I needed at the beginning of the buffalo season. I remained there for some time waiting for a caravan to come from the States which was to bring the goods I wanted. Things were wonderfully high; it took a beaver-skin for a plug of tobacco, three for a cup of powder, and other knick-knacks in proportion. Jim Finch, an old trapper that went under by the Utes near the Sangre de Cristo Pass, a few years ago, had told me there was lots of beaver on the Purgatoire. Nobody knew it; all thought the creeks had been cleaned out of the varmints.

So down I goes to the cañon, and sot my traps. I was all alone by myself, and I’ll be darned if ten Injuns didn’t come a screeching right after me. I cached. I did, and the darned red devils made for the open prairie with my animals. I tell you, I was mad, but I kept hid for more than an hour. Suddenly I heard a tramping in the bushes, and in breaks my little gray mule. Thinks I them ‘Rapahoes ain’t smart; so tied her to grass. But the Injuns had scared the beaver so, I stay in my camp, eating my lariat. Then I began to get kind o’ wolfish and squeamish; something was gnawing and pulling at my inwards, like a wolf in a trap. Just then an idea struck me, that I had been there before trading liquor with the Ute.

“I looked around for sign, and hurrah for the mountains if I didn’t find the cache! And now if I didn’t kiss the rock that I had pecked with my butcher-knife to mark the place, I’m ungrateful. Maybe the gravel wasn’t scratched up from that place, and to me as would have given all my traps for some Taos lightning, just rolled in the delicious fluid.

“I was weaker than a goat in the spring, but when the Taos was opened, I fell back and let it run in. In four swallows I concluded to pull up stakes for the headwaters of the Purgatoire for meat. So I roped old Blue, tied on my traps, and left.

“It used to be the best place in the mountains for meat, but nothing was in sight. Things looked mighty strange, and I wanted to make the back track; but, says I, here I am, and I don’t turn, surely.

“The bushes were all scorched and curly and the cedar was like fire had been put to it. The big, brown rocks was covered with black smoke, and the little drink in the bottom of the cañon was dried up. I was now most under the old twin peaks of ‘Wa-te-yah’; the cold snow on top looking mighty cool and refreshing.

“Something was wrong; I must be shoving backward, I thought, and that before long, or I’d go under, so I jerked the rein, but I’ll be dog-goned, and it’s true as there’s meat running, Blue kept going forward. I laid back and cussed and kicked till I saw blood, certain. Then I put out my hand for my knife to kill the beast, but the ‘Green River’ wouldn’t come. I tell you some invisible spirit had a paw there, and it’s me that says it, ‘bad medicine’ it was, that trapping time.

“Loosing my pistol, the one I traded at Big Horn, the time I lost my Ute wife, and priming my rifle, I swore to keep right on; for after staying ten years in these mountains, to be fooled this way wasn’t the game for me no how.