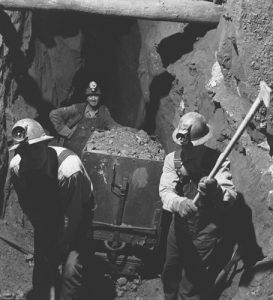 Silver was one of the last of the mineral products to attain prominence in the mining industries of the United States. Prior to the year 1859, the silver produced in this country was utterly insignificant. Only faint traces of it had been found here and there, and it was rarely made the object of special exploration. The silver coin in was almost exclusively of foreign metal, as was also the plate in common use.

The early Spanish invaders of this continent found the Aztecs of Mexico, and Toltecs of Peru, possessed of great quantities of this precious metal, which the Spanish obtained from the great mountain-range, which, under different discovery names, extends from the southern to the northern extremity of the New World. Mining was carried on even more extensively under the new governments, and immense quantities of treasure were carried home to Europe in Spanish ships. But, that portion of this great treasure vault of nature included within our present boundaries remained almost entirely free from investigation until 1849, and for ten years, the search was directed almost exclusively to finding gold.

Silver was found, however, mixed with galena, or lead ore, in small quantities by the eastern colonists a full century before. Such a vein, for instance, was discovered in Worcester County, Massachusetts in 1754. Another was discovered in Columbia County, New York, as in New England as early as 1740. Near it was an iron forge for the reduction of metal obtained from Connecticut. The same year argentiferous galena was found in Dutchess County, New York and later in Westchester County; the former being worked by the Germans of that vicinity. In a vein of copper discovered in New Jersey in 1719, there was found silver in the proportion of four ounces to every hundred-weight of ore. The Swedes reported the discovery of silver in Pennsylvania in their day; and it was found in small quantities near Davidson, North Carolina, and in South Carolina along the Savannah River. Later, the great galena mines of the Upper and Lower Mississippi River were discovered to contain a slight proportion of this precious metal. In some of these several localities the silver was abundant enough to pay for extraction, but rarely. In the early colonial days, it was not possible to eliminate it as easily and successfully as now, and in most cases, such experiments were soon abandoned. In later days it became more profitable, and yet in few cases were the results more than tantalizing. In the second half of the 19th century, the North Carolina mines were the only ones in the eastern part of the United States that were worked for this metal. No statistics were obtainable showing the exact amount of native silver produced in this country in 1850, but it is asserted, that, at that period of our history, 99 of every 100 silver dollars then in use in the United States were of Mexican or Peruvian metal. 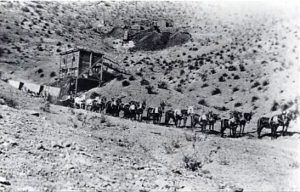 Just previous to the discovery of the famous Comstock Lode, stock companies were organized in New York, Cincinnati, and many other cities, to explore and work abandoned silver mines in Arizona which had been ceded to the United States by the Gadsden Treaty. The Sonora Company of Cincinnati was the most prominent of these; but, when it began operations in 1858, it was upon a new mine, 75 miles south of Tucson, very near the Mexican border. Their works were at Arivaca, seven miles from the mines. Operations were also commenced 70 miles north of Tucson, Arizona in 1870, by the Maricopa Mining Company of New York, whose mines yielded an argentiferous copper ore. The outlet for the product of both these mines was by wagon to Guaymas, Mexico, on the Gulf of California. These mines are upon the Pacific slope of the silver-yielding range of Sonora and Durango in Mexico. Other mines were found and worked with profit in Arizona farther west, near the Gila River.

The greatest event in the history of silver-mining in America was the discovery of the richest deposit in the world — on the eastern slope of the Sierra Nevada Range — in 1859. The crest of the range runs along the eastern Comstock part of California; and in the Washoe country, 25 miles over the border into Nevada, this magnificent vein was found. All during the interval between 1850 and 1860, those tireless, even heroic investigators, the prospectors, had ranged the whole mountain-region of the West on foot, with knapsack, hammer, and blow-pipe. As they wandered from ledge to ledge they picked out specimens here and there, cracked them, and studied the appearance of the fracture, and now and then reduced a bit of the ore with the blow-pipe on a piece of charcoal. In 1858-59 a party of these prospectors was working its way up Six-Mile Canyon, in the Washoe country. There, they found some rich sulphurets of silver interspersed with free gold. Immediately Henry Phinney and Henry Comstock filed a claim to a mine. The former sold out his claim to the latter for a pinch of gold-dust, not realizing the immense value of the discovery; and Comstock himself soon parted with the property, although his name still clung to the whole lode.

Prospectors keep as close watch of one another’s luck as so many coast fishermen. Before practical operations began, the great possibilities of this region began to be suspected, and a vast number of claims were filed all along these eastern foot-hills of the Sierra; and, as soon as mining was actually undertaken, it was realized that the richest accumulation of this precious metal ever known was beneath the feet of the Washoe operators. Tidings of the marvelous wealth hid away there spread like lightning, not over California alone (Nevada was not then a State, and had scarcely any population), and not over the United States alone, but over the whole civilized world. One of those periods of frantic excitement and wild sensation ensued such as Mark Twain has made us all familiar with in his “Roughing It.” A most extraordinary emigration ensued. Several large new towns sprang up, notably Virginia City, Carson City, and Silver City; Nevada took a place among the States of the Union; and the Central Pacific Railroad was extended through the region, its nearest station to the point of first discovery being at Reno, on the Truckee River, twenty miles away.

In “The Great Industries of the United States” it is remarked, “There is, perhaps, no instance so striking of the promptness and daring with which American capitalists launch their money into an enterprise in which they have confidence as the development of this Comstock Lode. In 1861 this lode was a wall of black sulphuret, bedded primeval granite and quartz, on the steep slope of a lonely and barren mountain two hundred miles from roads and shops and wheat-fields, parted from them by the gorges and snowy peaks of the Sierras: four years afterward a city of twenty thousand inhabitants was planted on that wild declivity, and nearly $2,500,000 in assessments had been paid to develop the mines.”