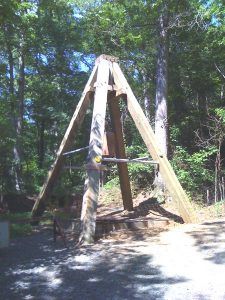 The Reed Gold Mine in Cabarrus County, North Carolina is the site of the first documented gold find in the United States. It would lead to the first gold rush — a half-century before the major Western rushes began.

Prior to this first find, the Spaniards had vainly sought large gold deposits in the southern Appalachian Mountains, and the English colonists searched to no avail for reported Spanish and Indian mines. But it was not until 1799 that significant deposits were discovered. In that year, Conrad Reed, the 12-year-old son of John Reed, found a gold nugget while playing along Little Meadow Creek that ran through his father’s farm. John Reed at first ignored the discovery, using the large 17-pound yellow rock as a doorstop in the Reed house.

In 1802 a John Reed took the rock to a Fayetteville jeweler who identified it as a large gold nugget. He told John Reed to name his price. Reed, not understanding the true value of gold, asked for what he thought was the hefty price of $3.50, or a week’s worth of wages. Later it was found that the nugget’s true value was around $3,600.

The next year, John Reed organized a small gold mining operation with several other local men and soon afterward a 28-pound nugget was found. The partners supplied equipment and workers to dig for gold in the creek bed, while Reed provided the land. The returns were to be divided equally. The men mined mainly in the off-season from farming, giving first priority to raising their crops. Using only pans and rockers to wash the creek gravel, the part-time miners recovered an estimated yield of $100,000 by 1824.

News of the discovery was quickly spread by regional newspapers and landowners across the area began to search for gold on their property. Nearly all of the land was privately owned and the beginning of the Carolina Gold Rush was largely conducted by farmers at the end of the growing season each year. These farmers were capable of conducting shallow surface mining of the stream-beds known as placer mining.

By the 1820s newspapers were publishing accounts of new mines in Cabarrus, Anson, Mecklenburg, and Montgomery Counties and in several counties of western North Carolina. Miners poured into the State, founded boom-towns, and then deserted them for richer placer fields. However, by the late 1820s, these placer deposits had been exhausted and the first lode mine shaft was excavated. 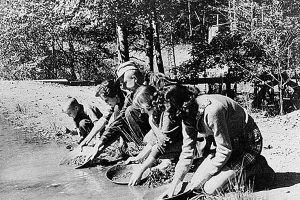 During its peak years, gold mining was second only to farming in the number of North Carolinians it employed. The estimated value of gold recovered reached over one million dollars a year.

After a new discovery near Dahlonega, Georgia, in 1829, prospectors invaded the entire Southeast.

John Reed and his partners continued with placer mining for a number of years until 1831 when he began underground mining.

John Reed died rich at age 58 in 1845 from the gold found on his property. Soon the Reed mine was sold at public auction. The mine would change hands many times over the years.

North Carolina led the nation in gold production until 1848 when it was eclipsed by the great rush to California. Total production in the State from 1799 to 1860 is estimated at about $60 million. At the height of operations in North Carolina, at least 56 mines were operating and employing 30,000 men.

In the end, the Reed Mine, the first commercially successful mine in the United States, yielded an estimated $10 million worth of gold before 1853.

Some years later, the Civil War decreased mining activity because of labor and resources being pulled into the war. The last large nugget uncovered by placer mining was discovered in 1896. The yield of the mine in large nuggets alone ultimately totaled more than one hundred pounds.

The last underground mining took place at the Reed Mine in 1912. To handle the large amount of gold found in the region and state from the 19th into the early 20th century, the Charlotte Mint was built in nearby Charlotte, North Carolina.

The Reed Gold Mine was designated a National Historic Landmark in 1966 and in 1971 it became a state historic site. Today the site is open to the public. Visitors can tour a museum with extensive displays about North Carolina gold mining. In addition, they can explore some 400 feet of restored mine tunnels. Numerous diggings can be seen on the crest of a hill overlooking Meadow Creek. The free site is open year-round.

The Reed Mine is located in Cabarrus County, North Carolina on a county road, about 13 miles southeast of Concord.