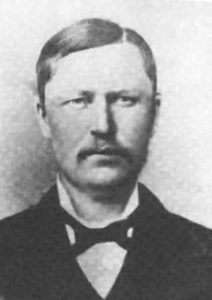 Tom Pickett was an outlaw and lawman who stole cattle and was captured with Billy the Kid in New Mexico in December 1880. Pickett later served as a Texas Ranger and U.S. Deputy Marshal.

Thomas Pickett was born to George Bibb and Cordelia Scarborough Pickett at Camp Throckmorton, Texas on May 27, 1856, but was raised in Decatur, Texas. Pickett would grow up to be both a lawman and an outlaw at various times of his life. He began a life a crime when he stole some cattle at the age of 17. Soon captured, his father, a former officer for the Confederacy and a member of the Texas legislature, mortgaged the family home to pay his fine. Pickett later went on to serve as a Texas Ranger for a short time.

He then followed a cattle drive to Kansas and became a gambler. There he met “Dirty Dave” Rudabaugh and the pair went to Las Vegas, New Mexico in 1879, where Pickett served as a “peace officer” in the Dodge City Gang. When the city of Las Vegas ran the men out of town, he and Rudabaugh soon joined up with Billy the Kid’s Gang and were rusting cattle near Fort Sumner. After Tom O’Folliard was killed by Pat Garrett’s posse, Picket and the others fled, hiding out in a stone house in Stinking Springs, New Mexico. Garrett soon tracked them down on December 23, 1880, and in the ultimate shoot-out, Charlie Bowdre was killed, and the rest of the gang captured and taken to Santa Fe, New Mexico.

After being released on a $300 bail, Pickett drifted into northern Arizona where he hooked up with the Hash Knife outfit and participated in the Graham-Tewksbury feud. Wounded in the leg during one of the many skirmishes, Pickett returned to working as a cowboy. He married in 1888, but his wife and baby both died in childbirth. He spent the rest of his days gambling, bartending, prospecting for gold and working as a cowboy. However, he did serve a short stint as a U.S. Deputy Marshal. After he was forced to have his leg amputated, Pickett returned to northern Arizona where he died of old age on May 14, 1934, in Winslow, Arizona at the age of 76.