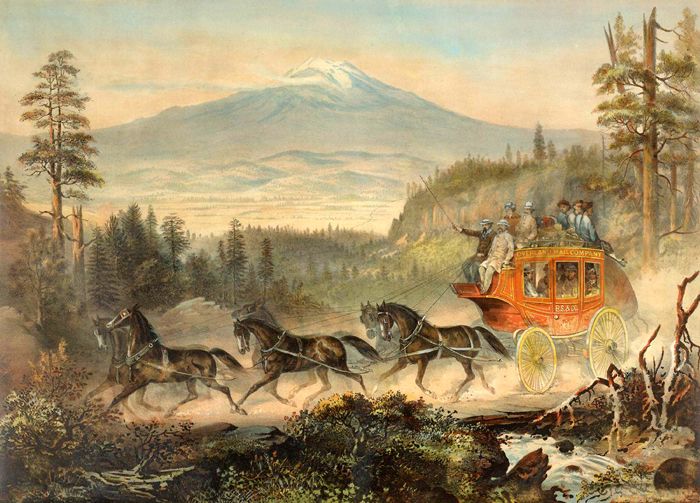 Virginia Dale, Colorado, located along the Overland Trail in Larimer County, began as a stage station in 1862.

Before this time, the Cherokee Trail was the only route through these foothills. In 1862, Ben Holladay moved the Overland Stage Company’s line from central Wyoming south into Colorado. The new route entered Colorado at Julesburg near the Nebraska state line and followed the Cache la Poudre River southwest to Latham and back north along the old Cherokee Trail into Wyoming through Virginia Dale. A branch line also ran south from Latham to Denver, which was growing rapidly.

Holladay gave directions to his most trusted employees to establish the locations for stage stations. One of these men was Joseph “Jack” Slade, who chose a site in a grassy meadow along a clear stream. The station was named for his wife, and the stream later became known as Dale Creek. 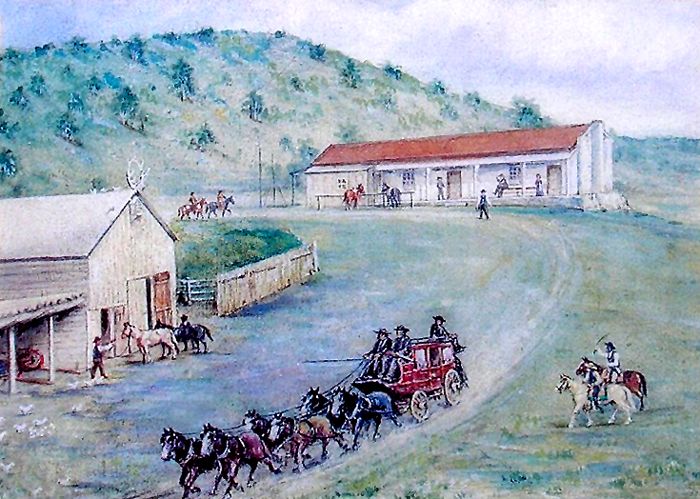 Virginia Dale was a “home” or “division” station on the Overland Trail, meaning passengers could disembark, get a meal, and stay overnight in a hotel. The station also supplied food and sleeping quarters for the stage drivers, and 30-50 horses were kept in a large barn, in corrals, or grazed in the meadow. The site also had a blacksmith shop and well-stocked warehouses that held supplies, hay, grains, canned and dried fruits, and meats. From here, supply wagons came and went regularly, delivering goods to other stations in the district. Both horses and drivers were switched at these larger stations. Mail service and up to nine passengers came through the station six days per week.

Jack Slade was an excellent stage manager as long as he stayed sober. However, he had previous run-ins when drinking and displayed outrageous actions such as shooting up a saloon in LaPorte, Colorado, for serving his stage drivers whiskey. His drinking problem caused his downfall, and in November 1862, he was fired after a drunken shooting spree at nearby Fort Halleck, Wyoming. He and his wife then left the area, making their way to Virginia City, Montana. On March 10, 1864, he was lynched by local vigilantes in Montana for disturbing the peace during yet another drunken spree.

In 1863, Indian problems to the north forced all east-west trail traffic to follow the Overland Trail. According to one report, “it was not uncommon to see 50 to 100 wagons with their loads of merchandise and freight encamped at the [Virginia Dale] station.” 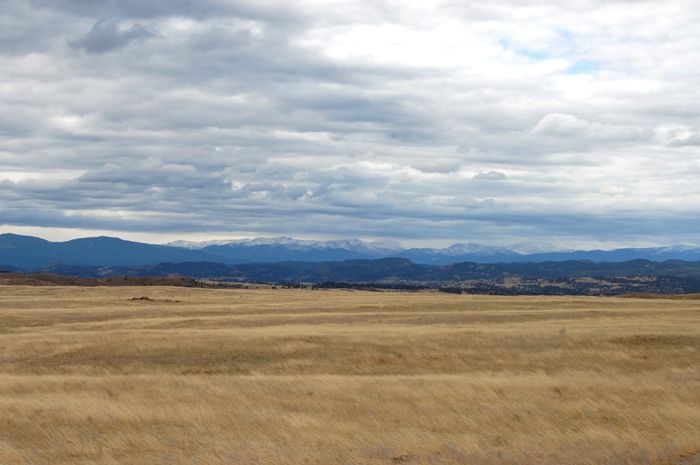 The Overland Trail stage line was also regularly terrorized by outlaws during these years. The area around Virginia Dale provided multiple opportunistic hideouts, one of which, called  Robbers Roost, atop Table Mountain about a mile northeast of the stage station, was a perfect hideout. It was difficult to climb with practically perpendicular cliffs and a rim of shale. It was so popular that the outlaws built a cabin there.

In 1863, a stagecoach along the Overland Trail carrying an army payroll of $60,000 (about $1.2 million today) in 10 and 20 dollar gold coins was destined for Fort Sanders, Wyoming. The gold shipment represented several months of back pay for the soldiers, but they would never see the gold. About a mile from the Virginia Dale Station, the stage was robbed by six masked outlaws at Long View Hill. The gang took the strongbox from the stage and headed west towards the wooded foothills, where they blew the lock off the box, removed the gold coins, and buried the treasure. However, before they could spend their ill-gained wealth, the bandits were pursued and killed by the U.S. Cavalry. The Cavalry later found the iron strong box in a nearby creek, the sides and bottom gone, riddled with bullet holes – and, obviously, empty. The money was never found. 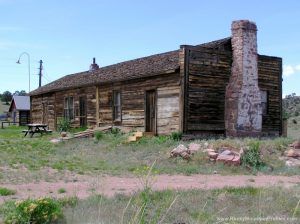 “Virginia Dale deserves its pretty name. A pearly, lively-looking stream runs through a beautiful basin of perhaps one hundred acres, among the mountains – for we are within the entrances of one of the great hills – stretching away in smooth and rising pasture to nooks and crannies of the wooded range; fronted by rock embankment, and flanked by the snowy peaks themselves; warm with the June sun, and rare with an air into which no fetid breath has poured itself-it is difficult to imagine a loveable spot in Nature’s kingdom.”

In 1866, the shrewd Ben Holladay, well aware that the inevitable completion of the new Transcontinental Railroad would eliminate the need for stagecoach transportation, was fortunate to sell the route and the equipment, and the contracts to Wells-Fargo. The overland mail continued for another 2 1/2 years along the Overland Trail until the Union Pacific, and the Central Pacific Railroads met at Promontory Point, Utah, in 1869, eliminating the need for mail service via the stagecoach. 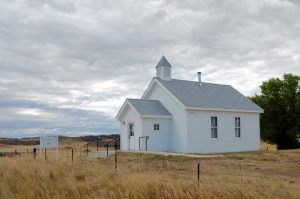 However, the site continued to be a stage stop until the spring of 1872. Afterward, the stage station continued to serve as a post office and general store. In the meantime, other settlers came to the area, primarily utilizing the land for ranching and dairying. A school was built in 1874, and the community gained a church in 1880. Over the years, the stage station passed through several owners, and in 1909, Emil Hurzeler built a new home on the property and ran the store and post office.

Around 1932, the post office was moved to Highway 287, where a cafe and gas station also operated. These closed in the 1990s, at which time the area residents received their mail from Livermore.

Today, the Virginia Dale area supports several ranchers, but the community is a ghost town. However, it boasts several historic buildings, including the old Overland Trail Stage Station, listed on the National Register of Historic Places, and is the only complete stagecoach station that remains along the Overland Trail. The stage station and the Hurzeler House are owned and maintained by the Virginia Dale Community Club. 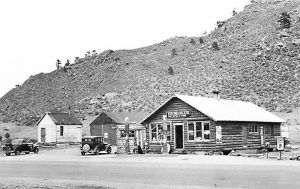 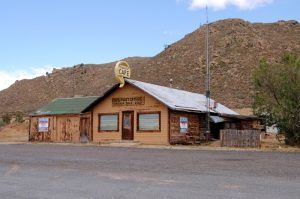 The old cafe and post office in Virginia Dale, Colorado, is closed today, by Kathy Alexander.

Virginia Dale is located in the northern part of Larimer County, about 45 miles northwest of Fort Collins, only about four miles south of the Wyoming border on U.S. Highway 287.

The stage station is situated at the very end of County Road 43F, about one mile east of US 287. A monument erected for the station marks the beginning of C.R. 43F. Though the station is on private property, it can be seen from the road. 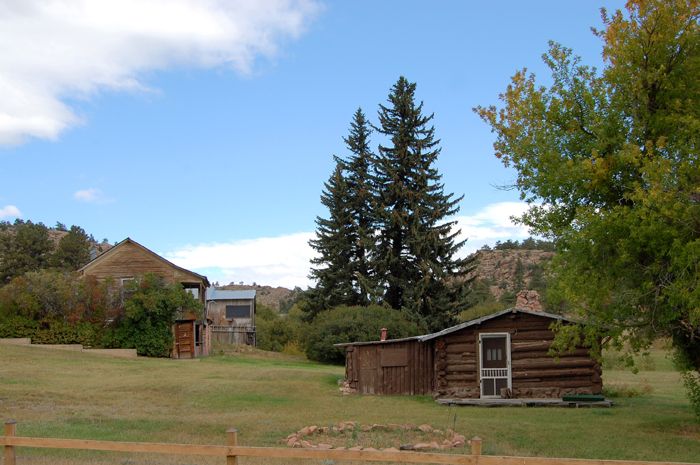 An old cabin near Virginia Dale, Colorado by Kathy Alexander.

Overland Trail Across the West