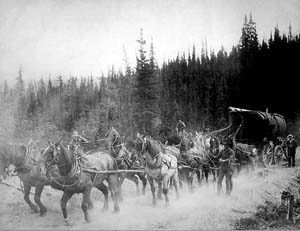 In 1863, a stagecoach along the Overland Trail carrying an army payroll of $60,000 (which would be about $1 million today) in ten and twenty-dollar gold coins was destined for Fort Sanders in Wyoming Territory. The gold shipment represented several months of back pay for the soldiers at Fort Sanders; however, the unfortunate soldiers never saw the gold.

Only about a mile from the Virginia Dale Station, the stage was robbed by six masked outlaws at Long View Hill. The gang took the strongbox from the stage and headed west towards the wooded foothills, where they blew the lock off the box, removed the gold coins, and buried the treasure.

However, before spending their ill-gained wealth, the bandits were pursued and killed by the U.S. Cavalry. The Cavalry later found the iron strong box in a nearby creek, the sides and bottom gone, riddled with bullet holes – and, obviously, empty.

The Overland Trail stage line was regularly terrorized by outlaws, where the surrounding area provided multiple opportunistic hideouts. One hideout labeled the Robbers Roost atop Table Mountain was so popular that the outlaws built a cabin there. Table Mountain, only about a mile northeast of the Virginia Dale Stage Station, was a perfect hideout, as it is difficult to climb with practically perpendicular cliffs and a rim of shale.

At the time, it was rumored that Joseph “Jack” Slade, the former Station Master, was the gang leader. Not as famous as many other outlaw characters, Jack Slade was nevertheless as notorious as many of them. Slade was said to have had an uncontrollable temper, was a heavy drinker and had murdered in the past. 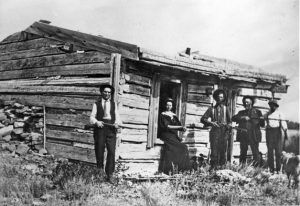 Later, Jack Slade moved on to Virginia City, Montana. A heavy drinker with a bad temper, he wrecked a saloon soon after his arrival. Jack was arrested, but he tore up the arrest and threatened the judge. Though he pleaded for his life, he was immediately hanged.

Virginia Dale, his girlfriend (or common-law wife), was brought to town by one of Jack’s friends, took his body home, pickled it in alcohol in a metal casket, and kept it under her bed for several months. She then took it to Salt Lake City, Utah, and buried him in the old Mormon Cemetery, where his body remains today.

The gold taken by the robbers at Virginia Dale has never been found.

Today, Virginia Dale is a ghost town located in the northern part of Larimer County, about 45 miles northwest of Fort Collins and just about four miles south of the Wyoming border on U.S. Highway 287. The old Overland Trail Stage Station is listed on the National Register of Historical sites, and recent efforts have been made to preserve it.

The stage station is situated at the very end of County Road 43F, about 1 mile east of US 287. A monument erected for the station marks the beginning of C.R. 43F. Follow the county road through a narrow gorge beneath Lover’s Leap, past a ranch, and it will take you right to the door. The station itself is on private property, but the access to the site is on a county road. If you intend to visit the Stage Station, you can take pictures of the grounds and the exterior of the building, but please do not trespass onto the private property.

Outlaws of the Old West