Fort Sanders was established in 1866 to protect the traffic on the Overland Trail in southern Wyoming near the city of Laramie. The fort was originally called Fort John Buford. Its grounds included wooden buildings to accommodate four companies and a parade ground. It was later renamed Fort Sanders after General William P. Sanders who died at the Siege of Knoxville during the Civil War. Troops also aided emigrants traveling the Lodgepole Trail and protected the Denver and Salt Lake stage line.

In 1868, the fort took on the additional task of protecting the workers of the Union Pacific Railroad and its wooden barracks were expanded to accommodate six companies. The establishment of Laramie City in the spring of 1868, situated about three miles north of the Fort Sanders post, prompted the construction of the guardhouse. It continues to stand today.

Fort Sanders became less important following the construction of Fort D. A. Russell in Cheyenne, Wyoming in 1868, but the War Department maintained it until 1882 when the buildings were sold. Two buildings were moved to Laramie and survive today. These include the Commander’s quarters, which were moved to LaBonte Park and have been used as a community center and pre-school for decades. Another building became the Cavalrymen Supper Club.

Today, all that remains of the fort at its original site is the stone guardhouse and a historic marker just south of Laramie, Wyoming. The guardhouse was added to the National Register of Historic Places in 1980. 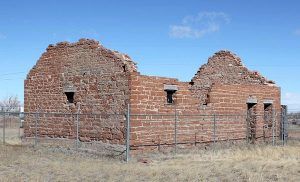 In the post’s 16 year existence its troops were involved in 20 major skirmishes with Indians, although no battles occurred on fort grounds. Since men garrisoned at Fort Sanders participated in General George Custer’s military campaign of 1876, it seems likely some probably fell at the Battle of the Little Big Horn.