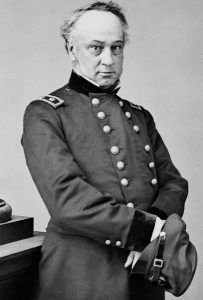 Fort H.W. Halleck was established 1862 to protect the Overland Trail from Indian attacks, the fort was named in honor of General H.W. Halleck, commander of the Division of the Pacific.

The site, on the north side of Elk Mountain at an elevation of about 7300 feet, was near a spring, had plenty of wood, and the area was filled with ample game. The fort complex consisted of stables large enough to hold 200 horses, storehouses, two sets of company quarters, officers’ quarters, a store, a bakehouse, a jail, and a hospital.

Though it was considered one of the most dangerous sections of the trail and the troops were kept busy defending the area, it was also a busy location. In 1864, over 4200 wagons carrying 17,584 emigrants passed the fort, bringing over 50,000 animals. Busy or no, after just four short years, the fort was abandoned in 1866. By the following year, one traveler described it as “the most dreary place on the entire route.”

Today, only one building remains that may be the old blacksmith shop. The site is located on a private ranch southwest of Elk Mountain in Carbon County. A stone marker indicates the site of the Fort Halleck cemetery.