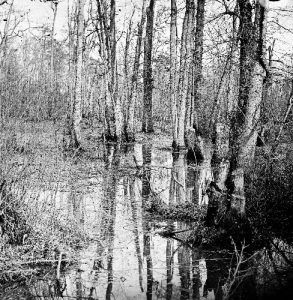 Confederate Major General T.H. Holmes made a feeble attempt to turn the Union left flank at Turkey Bridge but was driven back by Federal gunboats in James River. Union generals Meade and Sumner and Confederate generals Anderson, Pender, and Featherston were wounded. This was Lee’s best chance to cut off the Union army from the James River. That night, McClellan established a strong position on Malvern Hill. Totals loss was an estimated 6,500. 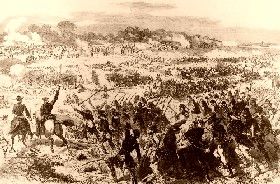 Malvern Hill (July 1, 1862) – The last of the Seven Days’ Battles, this encounter is sometimes referred to as Poindexter’s Farm. On July 1, 1862, General Robert E. Lee launched a series of disjointed assaults on the nearly impregnable Union position on Malvern Hill. The Confederates suffered more than 5,300 casualties without gaining an inch of ground. Despite his victory, McClellan withdrew to entrench at Harrison’s Landing on James River, where gunboats protected his army. This ended the Peninsula Campaign.  When McClellan’s army ceased to threaten Richmond, Lee sent “Stonewall” Jackson to operate against Major General John Pope’s army along the Rapidan River, thus initiating the Northern Virginia Campaign.  The Union victory resulted in a loss of 8,500 lives.

Also known as the Second Bull Run Campaign or Second Manassas Campaign, this was a series of battles fought in Virginia during August and September 1862 in the Eastern Theater. Confederate General Robert E. Lee followed up his successes of the Seven Days Battles in the Peninsula Campaign by moving north toward Washington, D.C., and defeating Major General John Pope and his Army of Virginia.

Rappahannock Station I (August 22-25, 1862) – Also known as the Battle of Waterloo Bridge, White Sulphur Springs, Lee Springs, or Freeman’s Ford, these skirmishes, which took place over four days, occurred in Culpeper and Fauquier Counties. In early August, General Robert E. Lee determined that Union Major General George B. McClellan’s army was being withdrawn from the Peninsula to reinforce General John Pope. He sent General James Longstreet from Richmond to join Major General Thomas J. Jackson’s wing near Gordonsville and arrived to take command on August 15th. On August 20-21, Pope withdrew to the line of the Rappahannock River. On August 23rd, Confederate Brigadier General J.E.B Stuart’s cavalry made a daring raid on Pope’s headquarters at Catlett Station, showing that the Union right flank was vulnerable to a turning movement. Over the next several days, from August 22nd to the 25th, the two armies fought a series of minor actions along the Rappahannock River, including Waterloo Bridge, Lee Springs, Freeman’s Ford, and Sulphur Springs, resulting in a few hundred casualties. Together, these skirmishes primed Pope’s army along the river, while Jackson’s wing marched via Thoroughfare Gap to capture Bristoe Station and destroy Federal supplies at Manassas Junction, far in the rear of Pope’s army. The inconclusive battles resulted in estimated total casualties of 225.