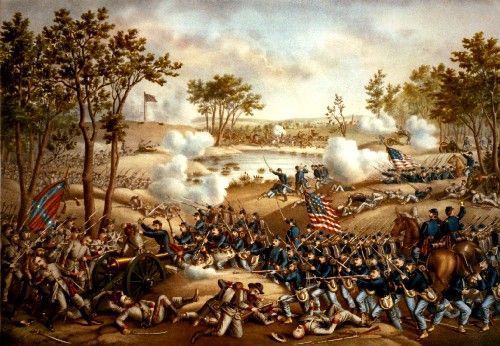 Taking place in Hanover County, this large engagement involved some 170,000 soldiers. On May 31st, Union General Philip Sheridan’s cavalry seized the vital crossroads of Old Cold Harbor. Early on June 1st, relying heavily on their new repeating carbines and shallow entrenchments, Sheridan’s troopers threw back an attack by Confederate infantry. Confederate reinforcements arrived from Richmond and from the Totopotomoy Creek lines. Late on June 1st, the Union VI and XVIII Corps reached Cold Harbor and assaulted the Confederate works with some success. By June 2nd, both armies were on the field, forming on a seven-mile front extended from Bethesda Church to the Chickahominy River. At dawn on June 3rd, the II and XVIII Corps, followed later by the IX Corps, assaulted along the Bethesda Church-Cold Harbor line and were slaughtered at all points. Lieutenant Ulysses S. Grant commented in his memoirs that this was the only attack he wished he had never ordered. The armies confronted each other on these lines until the night of June 12th, when General Grant again advanced by his left flank, marching to James River.

On June 14th, the II Corps was ferried across the river at Wilcox’s Landing by transports. On June 15th, the rest of the army began crossing on a 2,200-foot long pontoon bridge at Weyanoke. Abandoning Richmond’s well-defended approaches, Grant sought to shift his army quickly south of the river to threaten Petersburg. The Confederate victory resulted in an estimated 13,000 Union casualties and 2,500 Confederate.

Trevilian Station (June 11-12, 1864) – To draw off the Confederate cavalry and open the door for a general movement to the James River, Major General Philip Sheridan mounted a large-scale cavalry raid into Louisa County, threatening to cut the Virginia Central Railroad. On June 11th, General Sheridan with Brigadier Generals David M. Gregg’s and Alfred T. A. Torbert’s divisions attacked Confederate General Wade Hampton’s and Fitzhugh Lee’s cavalry divisions at Trevilian Station. Sheridan drove a wedge between the Confederate divisions, throwing them into confusion. On the 12th, fortunes were reversed. Generals Hampton and Lee dismounted their troopers and drew a defensive line across the railroad and the road to Gordonsville. From this advantageous position, they beat back several determined dismounted assaults. Sheridan withdrew after destroying about six miles of the Virginia Central Railroad. The Confederate victory at Trevilian prevented Sheridan from reaching Charlottesville and cooperating with Hunter’s army in the Valley. This was one of the war’s bloodiest cavalry battles, resulting in estimated total casualties of 1,600 men. 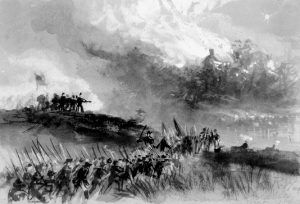 With Lieutenant General Ulysses S. Grant’s promotion to General-in-Chief of all Union armies in March 1864, he lost no time organizing a huge offensive across the entire front of the embattled states. In Virginia’s Shenandoah Valley and the new state of West Virginia, Union forces were ordered to disrupt railroad and transportation networks and destroy Confederate forces and the economic and agricultural resources that supported them.

New Market (May 15, 1864) – This battle took place in Shenandoah County. In conjunction with his Spring offensive, Lieutenant General Ulysses S. Grant ordered Major General Franz Sigel to move up the Shenandoah Valley along the Valley Pike with 10,000 men to destroy the railroad and canal complex at Lynchburg. On May 15th, Sigel was attacked by a makeshift Confederate army of about 4,100 men commanded by Major General John C. Breckinridge. At a crucial point, a key Union battery was withdrawn from the line to replenish its ammunition, leaving a weakness that Breckinridge was quick to exploit. He ordered his entire force forward, and Sigel’s stubborn defense collapsed. Threatened by the Confederate cavalry on his left flank and rear, Sigel ordered a general withdrawal, burning the North Fork bridge behind him. Sigel retreated down the Valley to Strasburg and was soon replaced by Major General David Hunter. The Confederate victory resulted in an estimated 840 Union casualties and 540 Confederate.

Piedmont (June 5-6, 1864) – After replacing Major General Franz Sigel in command of Union forces in the Shenandoah Valley, Major General David “Black Dave” Hunter renewed the Union offensive in Augusta County. On June 5th, Hunter engaged the Confederate army under Brigadier General William “Grumble” Jones north of Piedmont. After severe fighting, a flanking movement made by Colonel Joseph Thoburn’s brigade turned Jones’s right flank. While trying to stem the retreat of his soldiers, Jones was killed. The retreat became a rout. More than 1,000 Confederates, including 60 officers, were captured, and  Jones lost three guns. General Hunter occupied Staunton on June 6th and, after a pause to await the arrival of Brigadier General George Crook’s column, began to advance on Lynchburg, destroying military stores and public property in his wake. The Union victory resulted in estimated casualties of 875 Union and 1,500 Confederate.

Lynchburg (June 17-18, 1864) – From Lexington, Major General David Hunter advanced against the Confederate rail and canal depots and the hospital complex at Lynchburg, Virginia. Reaching the outskirts of town on June 17th, his first tentative attacks were thwarted by the timely arrival by rail of Lieutenant General Jubal A. Early’s II Corps vanguard from Charlottesville. Hunter withdrew the next day after sporadic fighting because of a critical shortage of supplies. His line of retreat through West Virginia took his army out of the war for nearly a month and opened the Shenandoah Valley for a Confederate advance into Maryland. The Confederate victory resulted in total estimated casualties