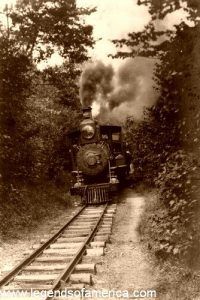 It is only when one reads such a book as Francis Parkman’s “Oregon Trail” that one fully realizes the vast transformation which has taken place within little more than half a century in the great Northwestern territory beyond the Mississippi and the Missouri Rivers. In that fascinating history, we read of the romantic and thrilling experiences of Parkman and his companions in their summer journey across the plains of Nebraska and through the mountain ranges of Wyoming, Montana, and Oregon. We read of their hairbreadth escapes from the Indians; their chase of the buffalo and other wild animals of the far Western country; of the wearisome weeks that they spent in crossing the deserts where absolute loneliness reigned; and finally of their arrival, after months of hardship, in the vast Oregon country, which with its great natural resources, splendid climate, and large extent has come to be known in these modern days as the Empire of the Northwest.

It was to penetrate and bring this great virgin region within reach of the East that the Northern Pacific Railroad Company was chartered by Congress in 1864, just prior to the closing of the Civil War. During this same period the Union Pacific route was being surveyed, and the first ground was broken in December 1863, for the line which was later to connect Omaha with San Francisco.

Like the Union Pacific charter, that of the Northern Pacific Railroad also contained an extensive land grant. From the modern viewpoint, such land grants look colossal, but in those days the general opening up and development of the Western country had progressed to so slight an extent that the significance of giving away millions of acres of the public lands to encourage a precarious railroad enterprise was then no more than the passing over to capitalists today of exclusive rights in extensive tracts of territory in Brazil and the other South American Republics. Even these great opportunities to acquire almost an empire of fertile lands or rich forests were not as a rule looked upon as attractive enough to tempt capital into the wilderness. The old saying that capital is the most timid thing in the world and does not like pioneering is strongly emphasized by such instances as this, and no doubt in 1864 the enormous grants of free land made by Congress did not appear especially attractive to the man who had money to invest.

Whatever the public attitude may have been, the Act of Congress of July 2, 1864, creating the Northern Pacific Railroad, gave that company the right to construct a line from some point on Lake Superior, either in Minnesota or in Wisconsin, westward and north of latitude 45 degrees, to or near Portland, Oregon. The land grant consisted of forty alternate sections of public land for each mile within the Territories penetrated and twenty alternate sections within the States through which the railroad might pass.

The hazardous character of this undertaking will be realized when it is remembered that at this time no railroad had yet penetrated the Rocky Mountains; that the entire railroad system of the United States was less than 40,000 miles; and that west of the Mississippi there was no mileage worth mentioning. It was still less than a generation since Parkman and his companions had made their four months’ journey from St. Louis to the mouth of the Columbia River, and between the fringe of civilization along the Pacific slope and the region about Chicago and St. Louis lay almost a third of the continent uninhabited, undeveloped, and unknown. The scheme languished for several years until finally, in 1869, the firm of Jay Cooke and Company of Philadelphia undertook to raise the necessary capital.

The story of the Northern Pacific for the next few years was closely bound up with that of Jay Cooke, who was one of the most conspicuous characters of his time in the financial world. He was a man of commanding personality, great energy, unusual resourcefulness, and with a large personal following. He had built his reputation through his great success in financing United States government loans during the Civil War. He now undertook to raise more than one hundred million dollars to carry through the Northern Pacific enterprise. He achieved remarkable success for a time and within three years had built over five hundred miles of the main line to the Pacific coast.

But, the outbreak of the Franco-Prussian War and the consequent financial stringency abroad, the difficulty of marketing bonds on an uncompleted enterprise, combined with the poor showing made by those sections of the line completed and in operation, brought matters to a crisis, and in September 1873, Jay Cooke and Company were obliged to close their doors. The affairs of the railroad were so closely involved with those of the banking firm that, although strenuous efforts were adopted to save the railroad, its revenues were inadequate. As a result, in April 1874, General Lewis Cass was appointed the receiver. 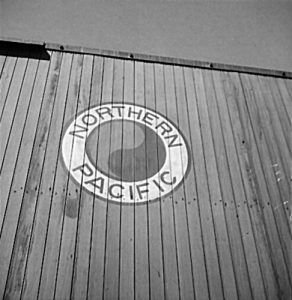 The uncompleted property was operated for some years thereafter under the protection of the courts and no plan of reorganization was devised until 1879. During the receivership, only a moderate amount of additional mileage was constructed, and it was not until many years had passed that the system penetrated the mountains and reached the Pacific coast. But when the new company took possession in 1879, aggressive building was resumed, and for a time it looked as though the project would be promptly finished. However, in 1882, the company still had about one thousand miles to construct in order to complete its main artery. At this time financial difficulties appeared, and the days of stress were tided over only by the help of a syndicate and the Oregon and Transcontinental Company.

With the formation of the Oregon and Transcontinental Company begins the regime of Henry Villard, the dominating factor in Northern Pacific affairs for many years afterward. Some years before, Villard, who had long been interested in Western railroad enterprises and who had become prominent through his activities in connection with the Kansas and Pacific Railway, had succeeded in forming the Oregon Railway and Navigation Company as a combination of steamboat lines operating on the Willamette and Columbia Rivers in Oregon, with an ocean line connecting Portland and San Francisco. A connecting railroad line, which had been built to Walla Walla in southeastern Washington, penetrated a portion of the territory through which the Northern Pacific was projected.

In 1880 a contract was arranged between the two companies whereby the Oregon Railway and Navigation Company, in order to share in the traffic, undertook to construct a line eastward to meet the Northern Pacific line at the mouth of the Snake River.

This arrangement would allow the Northern Pacific to run its trains into Portland and would obviate the necessity of constructing its own road into that city.

In spite of this arrangement, Villard feared that the Northern Pacific Company might decide, after all, to build its own line to Portland as soon as it was able to finance the project. It was for the purpose of preventing this move that he formed the Oregon and Transcontinental Company, a holding corporation which promptly acquired, in the open market and by private purchases, a dominating interest in the Northern Pacific Railroad. At the same time, Villard placed the control of the Oregon Railroad and Navigation Company in the hands of the new Transcontinental.