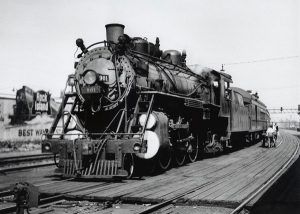 In 1851, it was changed to the Chicago and Rock Island Railroad, and construction began on October 1, 1851, in Chicago. The first train was operated on October 10, 1852, between Chicago and Joliet, Illinois. The railroad soon stretched across Arkansas, Colorado, Illinois, Iowa, Kansas, Missouri, Nebraska, New Mexico, Oklahoma, and Texas. Eventually, the line covered all of the states in the west.

Over the years, the railroad thrived, and in 1937, it introduced Diesel power to its passenger service, with the purchase of six lightweight Rocket streamliners. In 1964, the Rock Island began the process of merging with the Union Pacific Railroad, but the merger was mired in red tape, studies, and court hearings that drug on for ten years. One of the most complicated mergers in the history of the Interstate Commerce Commission, it eventually failed, leaving the Rock Island in bad financial condition. When Amtrak formed in 1971, the Rock Island did not join the group and instead continued to operate its own passenger trains. The railroad also operated an extensive commuter train service in the Chicago area. 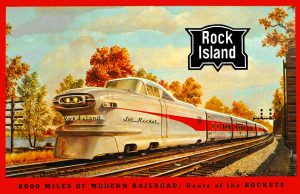 In March 1975, the Rock Island Railroad entered its third and final bankruptcy. This eventually led to a strike by railroad workers in August 1979. By January 1980, it was determined that the Rock Island Railroad could not be successfully reorganized, and it was ordered to be liquidated and sold. It was the largest bankruptcy liquidation in U.S. history up until that time. 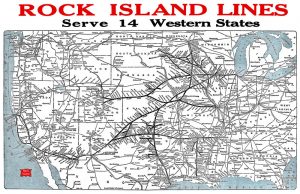