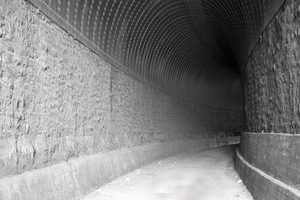 By late summer 1881, the westbound track-laying crews of the Atlantic & Pacific Railroad had reached a point near present day Williams, Arizona. The railroads course across northern Arizona to this point was an almost endless string of engineering marvels, the most notable of which was the spanning of the 250-foot deep chasm at Canyon Diablo.

Now survey crews faced a new challenge, the western escarpment of the Colorado Plateau scarred with steep and narrow canyons. To avoid construction of a costly loop that would sweep miles to the south, engineers selected Johnson Canyon even though this would result in a roadbed with a drop of 112 feet per mile, an incline that exceeded grade level standards.

This, however, was but one of the obstacles engineers and construction crews faced in the confines of the canyon. Just west of the summit a sheer rock shoulder formed a cliff at a point where the canyon made a sharp turn.

As the required tunnel, the only one on the main line west of Albuquerque, was a relatively short one of 328 feet, engineers predicted this would constitute a very short delay. Then daily progress dropped to mere inches as the tunnel crews struck a core of basalt.

Meanwhile, as the tunnel construction progressed albeit slowly, other crews addressed the remaining obstacles, the bridging of two gorges one of which would be immediately to the west of the tunnel face. These projects required something more than a simple rail gang and the railroad began luring powder men, miners, and bridge builders, professionals, from the four corners of the earth by offering unheard of wages – $2.40 per day for laborers, $2.80 per day for drillers. 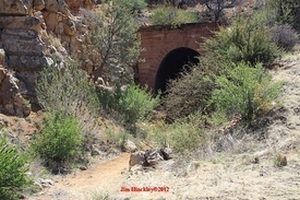 The west portal of the Johnson Canyon Railroad tunnel built in 1883.

Soon a small railroad camp complete with stores, saloons, and brothels was booming among the pines 200-feet above the tunnel site. Injuries and work related deaths were common but, surprisingly, shootings and similar violence were rare enough that when they did occur, it was a news worthy event.

An article in the Arizona Weekly Miner published in February of 1882 records one such incident in which an altercation between James Casey and William Ryan ended when Casey shot Ryan in the head. Armed and enraged citizens forced Casey to barricade himself in a saloon. The newspaper account chronicles the end of the affair with a succinct statement, “Luckily a ball from one of the guns ended his (Casey) villainous career, and he was sent to meet his Maker with the blood of Ryan fresh on his hands.”

Death on a large scale struck in August as a premature explosion of blasting powder being tamped into drill holes set off a nearby stockpile. Several men simply vanished and the official death toll was six.

The slow pace of tunnel construction brought the Atlantic & Pacific Railroad to the brink of bankruptcy forcing the sale of stock to the rival Atchison, Topeka & Santa Fe Railroad. This only postponed the inevitable and soon the A & P was little more than an historic footnote.

As it turned out, completion of the tunnel in late 1882 led to new engineering challenges as rock falls plagued the site. To address the problem an intricate lattice of heavy timbers held the ceiling in place but a fire in 1898, and the subsequent rock fall led to the closure of the line for eleven days and resulted in the deaths of two men.

Repairs to the tunnel included the addition of a riveted iron ceiling, and the lowering of the floor. Between this date and abandonment of this line in 1959, the only modifications of note were exterior ones in the form of a gun emplacement built over the tunnel during World War II as this railroad bottleneck was deemed a vital resource. 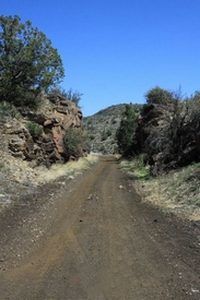 The tragedies associated with the tunnels construction are only a small part of the canyons bloody history. A series of derailments, some of which resulted in trains plummeting one hundred feet to the canyon floor below, ensured Johnson Canyon a national reputation as one of the most dangerous railroad lines in America.

The tunnels obscurity is somewhat puzzling in light of its importance to western development. The ease of access to the site compounds this mystery.

An adventure to the tunnel begins at exit 151, Welch Road, on I-40 west of Williams, Arizona. Continue north on Forest Road 6, crossing two early alignments of Route 66, and drive several miles to the site of Welch Station dominated by a large concrete slab.

Now, simply follow the old rail bed approximately 2.5 miles east into the canyon. This is a relatively easy hike, as the rail bed is wide and level, and the grade minimal. This is a very remote area so be prepared and during the months of summer, watch for snakes as they are quite plentiful. Notify someone of your destination as well as when you plan to return, carry plenty of water, and be sure to savor the solitude as you climb higher into the scenic canyon.

About the Author: Jim Hinckley is an award-winning author and photographer. Hinckley is a former Associate Editor of Cars and Parts Magazine, and author of multiple books, including several on Route 66.  You can follow him on Jim Hinckley’s America.