Though Jesse Chisholm blazed the famous cattle trail that took his name, he never herded cattle. Instead, he used the path to transport goods from his trading posts.

Born in Tennessee in 1805 or 1806, Jesse was the oldest of three boys sired by a Scottish immigrant, Ignatius Chisholm, and his Cherokee wife. Sometime later, his parents separated, but both parents went to Arkansas Territory.

During the late 1820’s Jesse moved to the Cherokee Nation, settling near Fort Gibson, Oklahoma, and became a trader. He also worked as a hunter, guide, and scout during this time.

In 1836, he married Eliza Edwards and soon left the Cherokee Nation, settling in the Creek Nation in Hughes County, Oklahoma, where he established a trading post.

Fluent in 14 different Indian dialects, Chisholm was highly successful in trading goods with the various tribes in Indian Territory.

Because of his linguistic skills, he was also in high demand as an interpreter, eventually becoming involved in several treaty councils in Texas, Indian Territory, and Kansas. He played a large role as a guide and interpreter for several plains Indian groups at the Tehuacana Creek councils in 1843, where he coaxed several tribes to the first council on the creek near present-day Waco, Texas. He was also instrumental in getting the Comanche and other tribes to attend a meeting in 1844, where the Republic of Texas President Sam Houston spoke.  He would play an active role in these types of councils until 1858. During his travels through Indian Territory, he rescued several captive Mexican children from the Comanche and Kiowa, adopted them, and made them part of his family. 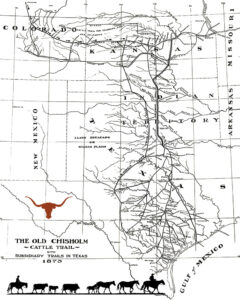 Chisholm started limiting his activities to Oklahoma in 1858 and expanded his trading operations, opening additional trading posts in Cleveland County, Oklahoma, one near Oklahoma City, and another in Wichita, Kansas. Most of his trading was completed by hauling wagons to the Indian villages and the U.S. Army posts.

During the Civil War, Chisholm first served the Confederate Army as a trader with the Indians; however, by 1864, he was acting as an interpreter for the Union forces and was living in Wichita, Kansas. At this time, he first marked what would become known as the Chisholm Trail when in 1865, along with James R. Mead, he loaded a train of wagons at Fort Leavenworth and established a trading post at Council Grove, near what is now Oklahoma City.  Many of his friends in Wichita followed the route, which later became the Chisholm Trail.

Over the next several years, he attempted to arrange an Indian council to make treaties. Finally, in 1867 he persuaded plains tribes to meet government representatives, resulting in the Medicine Lodge Treaty.

Ironically, Chisholm never drove cattle on the trail named for him, but when the Texas cattlemen were looking for a way to drive their cattle northward to the railhead in Kansas, they used the path he had forged. The Chisholm Trail generally went north from Austin through Waco and Fort Worth before crossing the Red River near Preston, central Oklahoma, and into Kansas.

Jesse Chisholm died of food poisoning in his trading camp at Left Hand Spring (near Geary, Oklahoma) on March 4, 1868. He is buried near Geary.