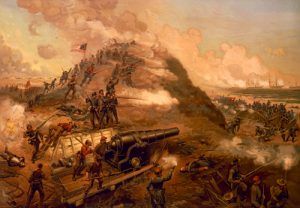 Fort Fisher protected the mouth of the Cape Fear River, below Wilmington, North Carolina, a favorite entrance for blockade runners. The fleet was lying at Hampton Roads, Virginia.

Admiral David D. Porter assumed command in November and at once began assembling a powerful fleet. Every preparation was made for active service. Boilers and machinery were overhauled, magazines, shell-rooms, and storehouses replenished, and constant target practice was had with all guns. Thus, by the end of November, the largest fleet ever seen under the American flag was assembled in Hampton Roads, all classes, from the largest monitor to the smallest gunboat, being represented.

Our destination was a secret, carefully guarded, but we surmised from what was taking place that some important move was contemplated, and in this, we were not mistaken. It was evident from the daily target practice that the Admiral meant we should hit something when the time for action came, and the landing of the men on the beach for the drill was an indication of possible shore service. 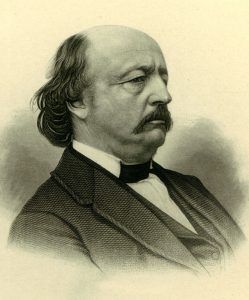 Early in December, the troopships arrived — 13,000 men under General Benjamin F. Butler, and still our destination was a secret. Toward the middle of December, all our preparations had been completed, and we put to sea under sealed orders.

Before leaving Fortress Monroe, General Butler had proposed a powder boat, by the explosion of which, he hoped seriously to injure the forts on Federal Point, including Fort Fisher. Indeed he was confident that he would dismount most of the guns and level the works. Accordingly, an old steamer, the Georgiana, had been loaded with several hundred tons of powder and turned over to the navy to explode at the proper spot. A crew of volunteers had her in charge, and on the evening of December 24, took her in for the final act of her career. No man in the navy believed for a moment that she would do much harm, but none of us anticipated how little injury would come from the explosion.

At eleven o’clock that night, Admiral Porter steamed about the fleet in his flagship, the side-wheeled steamer Malvern, and made signal: “Powder boat will blow up at 1.30 A.M. Be prepared to get underway, and stand in to engage the fort!” After that, there was no sleep for anyone; we stood and watched and waited as the hours slowly dragged by. Half-past one came and no explosion, and we were fearful of some mishap, but just as the bells struck two o’clock, it came. First came a gentle vibration, then the masts and spars shook as if they would come down about our cars; and then came the low rumble like distant thunder, while the sky to the westward was lighted up for a few seconds, and then great masses of powder smoke hung over the land like thunderclouds. Surely the powder boat had blown up, and as the fleet rapidly formed for battle, there was great curiosity everywhere to see what the effect had been. 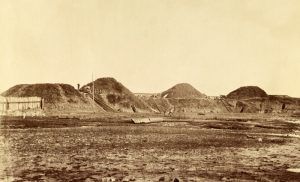 We were heading in for the fort at daylight and almost in range when we saw General Butler’s flagship coming in at full speed, heading straight at Fort Fisher, which looked to us very grim and strong and totally uninjured. Everything was very quiet until the General got fairly within range when there was a flash from the fort and a prolonged roar, and all the guns on the face of that work opened on his ship. If he had had any notion that he could land unopposed, he was quickly undeceived, and the way that ship turned and got offshore spoke well for the energy of her fire-room force! The last we saw of her, she was running cast as fast as her engines could carry her. The powder boat had proved a failure, and the General was grievously disappointed. A rebel newspaper reported that a Yankee gunboat had blown up on the beach, and all hands lost.

We had been up many of us all night, and our only breakfast had been coffee and hard-tack. As we approached our position, Commodore Schenck sent me aloft with a pair of glasses to locate, if possible, some guns that were annoying him. It was a raw cold morning, and I had on a short double-breasted coat, in the pockets of which I had stowed several pieces of hardtack. When I had taken my place in the mizzen rigging, just below the top, I put the corner of hardtack in my mouth and was holding it between my teeth while I looked through the glasses for the guns. 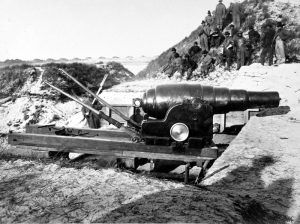 I caught them at once and saw gunners train one of them around until I could only see the muzzle of it, which interested me because I knew it was pointing directly at us. There was a puff of smoke, something like a lamp-post crossed the field of the glass, and a moment after, the rigging was cut four feet below me, and I swung into the mast. I thought of my hardtack at once, but it was gone, and I never found even a crumb of it. I am sure that I swallowed it whole. When I had reported what I had made out of the battery, I was directed to lay down from aloft to my station, which was in charge of the after the division of the guns; but I hesitated to do so because my knees were shaking, and I was afraid the men would see it. However, I had to come down, and as soon as I reached the deck, I stood up and looked at my legs and was greatly relieved to find that they did not show the nervous tremor which worried me so. I soon forgot all about it as I became interested and warmed up to my work.

We had only 18 inches of water under us when we finally anchored and began firing rapidly. There was a wreck of a blockade-runner between us and the battery at which we were to fire, and it was evident that this had been used as a target and that the range was well known. One or two shots were fired in line with it, each one coming closer to us, and then they struck us with a ten-inch shot. Four more followed, each striking nearly in the same place, on the bends forward of the starboard wheel and going through on to the berth deck. Then, the shot and shell began going over us for some reason, striking the water thirty or forty feet away. Probably the gunners on shore could not see the splash of these shots and thought they were striking us. If they had not changed their range when they did, they would have sunk us in an hour. As it was, we hauled out at sundown, pretty well hammered and leaking so that we had to shift all our guns to port to stop the shot holes. 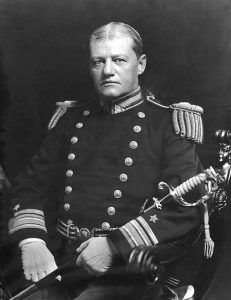 We had damaged the fort to the extent of dismounting some of the guns and burning the barracks and officers’ quarters. When the whole line was fairly engaged, the sight was magnificent and never forgotten by those who saw it. No fort had ever before been subjected to such a fire, and the garrison could only make a feeble response; most of them were driven into the bomb-proofs, where they remained till we hauled off for the night. The heaviest losses on our side had been caused by the bursting of the one-hundred pound Parrott rifles; thirty-five or forty men had been killed or wounded in this way.

North Carolina in the Civil War

Notes and Author: This tale was written by Rear Admiral Robley D. Evans who led the attacks on Fort Fisher, exhibiting great courage and leading his landing party through heavy fire, while wounded. Evans continued his military career after the Civil War until he was forced to retire due to ill health. The Attack on Fort Fisher was included as a chapter in Albert Bushnell Hart’s book, The Romance of the Civil War, published in 1896 and now in the public domain.