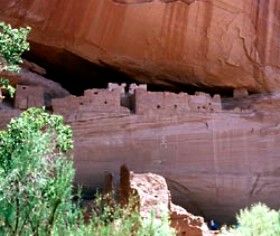 One of the oldest towns in the United States, Gallup, New Mexico’s population can be traced back to 2500 BC with the settlement of the Ancient Puebloans in Canyon de Chelly. As the Ancient Puebloan population rose, so did trading in the area. By the time the Spanish Conquistadors arrived in 1540, a highly sophisticated Native American culture was thriving. Although not quite the “Seven Cities of Gold” that Coronado and the Spanish Crown were hoping to find, these settlements displayed building, craft and farming methods that were uncommonly sophisticated, as well as a network of roads connecting other important settlements throughout the region.

White men began to populate the area in 1880 when the Atchison, Topeka and Santa Fe Railroad began to push its way westward. The railroad paymaster, David Gallup, established a small company headquarters along the projected railroad right-of-way. Rail workers soon began “going to Gallup” to collect their pay.

When the tracks were finally laid through the area in 1881, the new settlement was formally named after the paymaster. Gallup was incorporated as a town in 1891. A local government was established and in 1901 it became the county seat of McKinley County. 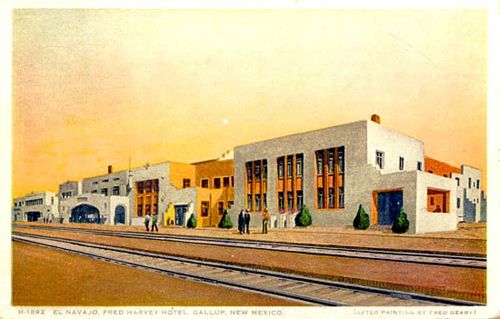 In the early days, Gallup was a typical, western frontier town, but comparatively quiet by most Old West standards. Gallup had its share of saloons, false storefronts, wooden sidewalks and a single road paralleling the railroad tracks. Today, this road is known as Main Street and Route 66. There were occasional, minor Indian uprisings, but the soldiers of nearby Fort Wingate were able to discourage any major attacks. Most of the citizens carried arms until a law in 1896 limited that practice.

For the first half of the twentieth century, the economy of the emerging town was largely supported by plentiful coal mining in the region. In fact, Gallup was called “Carbon City” for a time. The town’s first inhabitants were those westward-seeking workers who sought employment in the mines and on the railroad.

When Route 66 came through town in 1926, numerous motels and service business sprang up on Main Street. But the most prevalent businesses were the dozens of Indian Trading Posts that sprouted up displaying Native American arts and crafts to the many travelers along the Mother Road. Many of these vintage trading posts can be seen today, along with galleries, gift shops, old motels, and restaurants along historic Route 66 in Gallup. 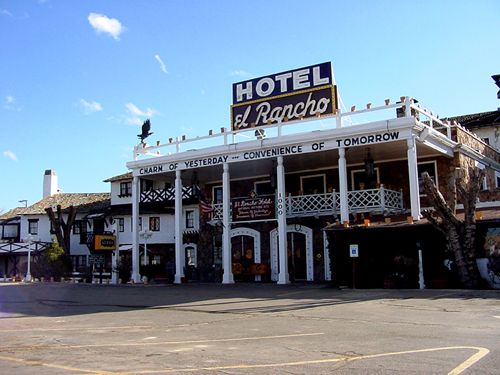 On December 17, 1937, a Gallup icon was born when the El Rancho Hotel was built by the brother of the movie magnet, D.W. Griffith. The hotel quickly became the temporary home for many Hollywood stars, as well as a stopping point for tourists, drive on old Route 66. During its heyday, the El Rancho Hotel hosted Ronald Reagan, Spencer Tracy, Katherine Hepburn, and Kirk Douglas, among many others. Today, visitors can still enjoy the Old West charm of this historic hotel, now on the National Historic Register.

With a population of approximately 20,000 contemporary Gallup is a unique and colorful mix of vibrant enterprise and traditional Native America. With genuine arts & crafts in rich abundance, the city’s 110 trading posts, galleries, and shops project a unique blend of Native American and Hispanic culture.   The numerous trading posts, shops, and galleries make the town the undisputed Southwestern center for original Native American art. On Route 66 (Main Street) and Coal Avenue, which parallels Main Street one block south, are the principal sites of most of the gallery and trading post activity. For the best experience, park your car and walk! 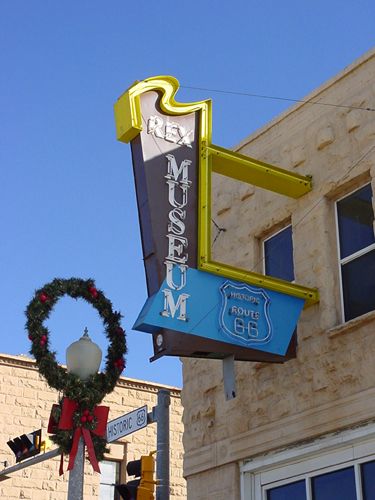 Of special note are the former Rex Hotel (circa 1900) at 300 West Route 66, which is now the Rex Museum. Also, have a look also at the appealing pueblo revival McKinley County Court House (1938), 201 West Hill. The finest example of the decorative Spanish colonial revival style is the historic El Morro Theater, home of the annual Gallup Film Festival at 207 West Coal. 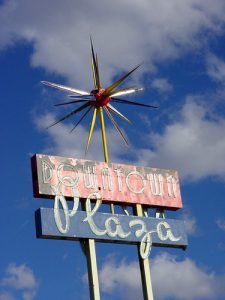 Another “must-see” is the new Gallup Cultural Center located in the historic restored railroad station on Route 66. A project of the Southwest Indian Foundation, the Center consists of the Ceremonial Gallery, the Storyteller Museum, a Visitor Center and the Kiva Cinema. In the summer, nightly Indian dances are performed at the Cultural Center.

There are also a number of fine establishments at the eastern end of town, just as one exits I-40 for the business loop at Rehoboth.

The Zuni, Acoma, Laguna, Navajo, and Hopi pueblos, as well as the ancient Ancient Puebloan ruins in Chaco Canyon and Canyon de Chelly, are all within a two hours drive.

Gallup, New Mexico is 22 miles from the Arizona border off Interstate 40.