Hannah Varnum (or Farnum) Tyler Brumidge (1635-??) – From Haverhill, Hannah Varnum would grow up to marry Abraham Tyler on December 26, 1650. After he died in 1973, she married Edward Brumridge. During the witch hunt of 1692, she was accused and imprisoned. Nothing more is known of her.

Sarah Smith Buckley (1636-??) – The wife of William Buckley of Salem Village, Sarah Smith Buckley was indicted and imprisoned for practicing witchcraft in May 1692. Her widowed daughter, Mary Buckley Witheridge, was arrested the same day and also imprisoned. Originally from Ipswich, Sarah Smith married William Buckley, a shoemaker, and the couple would have eight children. They lived in Ipswich until at least 1674 and later moved to Salem Village. They were prosperous at first, but their property was seized when they lost a lawsuit brought against them by the governor, Simon Bradstreet. One of his sons was involved in another suit, and as payment, William Buckley lost shoemaker tools. Before long, the family was homeless and begging for their subsistence. In May, Sarah and her widowed daughter, Mary Buckley Witheridge, were accused of witchcraft and arrested. Both women were examined on May 18th, accused by Mary Walcott and Ann Putnam, Jr., who said Sarah’s specter had tortured them. Also testifying against her were Susanna Sheldon and Benjamin Hutchinson. Sarah’s husband, William Buckley, was able to convince two pastors to speak in favor of them, but it wouldn’t be enough. Both were sent to prison. After spending some eight months in prison both Sarah Smith Buckley and her daughter were found not guilty in January 1693 and were discharged after paying her fees. What became of Sarah afterward is unknown. However, it is known that her husband died in 1702. 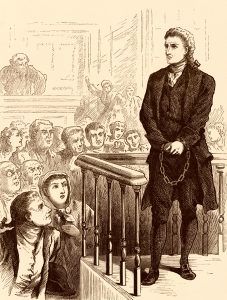 Reverend George Burroughs (1652?-1692) – The only Puritan minister indicted and executed in Salem in 1692, George Burroughs was born in Suffolk, England. At a young age he left England for Massachusetts, where he was raised by his mother in Roxbury. He grew up to attend Harvard College and graduated in 1670. Burroughs then went to Maine where he preached in Falmouth (Portland), on Casco Bay, until that settlement was attacked by Indians in August 1676 during King Philip’s War. Burroughs then returned to Massachusetts, setting in Salisbury when he received the call to Salem Village.

As one of his conditions for coming, Burroughs stipulated “that in case any difference should arise in time to come, that we engage on both sides to submit to counsel for a peaceable issue.” Though this was common language in the 17th century New England, it no doubt, had more significance for  Burroughs, who had probably learned from Bayley something of what confronted him.

He then became a minister in Salem Village in 1680. The differences were not long in arising and it was not long before he was in the midst of the conflict taking place in the village. With many villagers not paying their taxes, Burroughs was not always being paid and borrowed money from the Putnam family. It was to Burroughs that Jeremiah Watts wrote his letter of April 1682, lamenting the disputes of Salem Village that were pitting “brother against brother, and neighbors against neighbors.”

By early 1683, the minister’s salary was not being paid at all, and in March, Burroughs simply stopped meeting his congregation. Burroughs then accepted an offer to resume his ministerial duties at Casco Bay, which had been reorganized. He stayed there until the community was once again destroyed by Indians in 1690. He then moved to Wells, Maine.

In May 1692, during the Salem witch trials, based on the accusation of the Putmans, who had sued him for the previous debt, Burroughs was charged, arrested and brought back to Salem. Among other offenses, he was accused of extraordinary strength, which could not have been achieved without diabolical assistance. Although he eventually repaid his loan, many members of the Salem Village and Andover testified against him and called him the “ringleader” of the witches, a virtual priest of the devil. Cotton Mather also took particular interest in the trial because of Burroughs’ unorthodox religious beliefs and practices. He was found guilty and convicted of witchcraft and conspiracy with the Devil.

He was executed on August 19, 1692. While standing on a ladder before the crowd, waiting to be hanged, he successfully recited the Lord’s Prayer, something that was generally considered by the Court of Oyer and Terminer to be impossible for a witch to do. His hanging was the only one attended by Cotton Mather, a minister from Boston, who urged the sympathetic crowd against him. After Burroughs had been hanged, Mather reminded the crowd from atop his horse that Burroughs had been convicted in a court of law, and spoke convincingly enough that four more were executed after Burroughs.